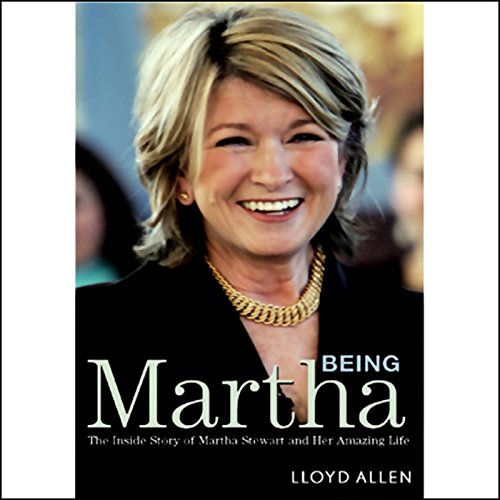 When Martha Stewart was under investigation for insider trading and later on trial, the media served up countless gratuitous stories describing her ornery character. Now, Lloyd Allen, Martha's old friend and neighbor, is out to set the record straight. Drawing on hundreds of hours of interviews with Martha, her family, and her close friends and colleagues, Allen reveals the other side of the story, bringing to life the real woman behind the controversial and glamorous public image. From her childhood in New Jersey to the early days of her catering business, her rise as lifestyle guru, the huge success of Martha Stewart Living Omnimedia, and now two new television shows, Allen weaves together fascinating observations and details that show how Martha made it to the top and stayed there through talent, passion, and hard work.
©2006 Lloyd Allen (P)2006 Blackstone Audiobooks

A view to Martha Stewart's life from the inside

The author is Martha Stewart's friend and he makes that perfectly clear. That said, I think he does a good job at being impartial. Provides good descriptions of how it all started however doesn't go as much into how the business grew after a while.
If you want to know more and learn from Martha Stewart, I find this a good book to start.

I thoroughly enjoyed this book. It offers a very fair neutral look at Martha Stewart.(One of my idols). I highly recommend it!

A Diva In Her Own Right

The author Lloyd Allen tries to set the record straight on Martha and portray her as a warm loving individual - unfortunately, I wasn't buying it-the deck is stacked against him.

A bit dated now (it ends over ten years ago) but a well written insight into Martha Stewart, her background, personality. and business savvy. Great read for the female (& male) entrepreneur, if a bit daunting as nobody is going to be Martha and not everyone is that driven or comfortable with being that driven. Her strength through her trial, incarceration and her return/comeback is inspiring to anyone.

Too biased. Didn't finish the book

I was looking forward to this book. However it’s to sycophantic and detract from the story. I understand the author is a friend but he could have been a little more objective.