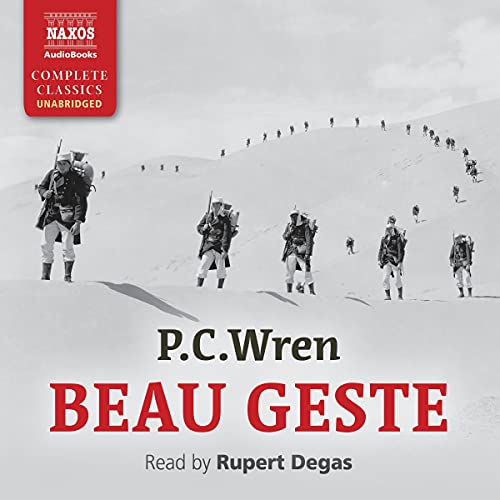 First published in 1924, Beau Geste tells the story of a stolen sapphire and three brothers, who consequently join the Foreign Legion. Michael "Beau" Geste, as his nickname suggests, represents honor and bravery in the midst of deceit and treachery. An action-packed adventure, much of the plot is set in French North Africa, where the Geste brothers have to contend with both a mutiny in their ranks and the attacks of the Touaregs. The novel has given rise to many films, most notably the 1939 version starring Gary Cooper and Ray Milland, and a stage production with Laurence Olivier in the title role.

The Decent Thing to Do

I thought of this theme when I finished listening and I think about it now. The theme runs throughout this work and I figured that the decent thing for me to do would be to leave a great review. Beau Geste certainly deserves at least that: a great review.

I had always heard the name in reference to classic old movies, but I never realized that there was a novel to go with the title of Beau Geste. When I stumbled upon this audiobook during a search for the next great thing on Audible, I gave it a try. I was very happy that I had done so.

Beau Geste is about the three Geste brothers joining the French Foreign Legion prior to the Great War, their reasons for joining, and their adventures in the Legion. From beginning to end, the theme of "the decent thing to do" is at the forefront, and I mean that quite literally: right to the very end. The story is completely engaging but was also slyly addictive. I was caught in the net of the opening mystery right off the bat. I found myself arriving home but staying in my car to hear just a little more of the drama play out. I spent time away from the novel pondering the several mysteries that the opening mystery leads to, trying to figure out the details from the information that I had. I was hooked in a way that made me very happy.

I was never disappointed at all with Beau Geste. I was excited, worried, curious, sympathetic, triumphant, and saddened - not in any particular order. The characters were marvelous, though as pulpily heroic as they were, they were still lovable humans. Their actions and decisions were straightforward, even though the reasons for those actions and decisions were not as straightforward. They were a pleasure to be around, and I found myself wishing that I had met those fictional men in real life.

The performance was top-notch. I was amazed at how easy it was for the narrator to switch to different accents, and how natural it seemed for him to speak in different languages. His voice helped me envision the characters as much, if not more, than the words that he read. Never was I lost or confused or bored.

Overall, Beau Geste was absolutely fantastic. I was always pleased with the story and the narration, and I did not want it to end. I look forward to reading more works from the author, P.C. Wren, and to hearing more books by Rupert Degas. There are a couple of sequels to Beau Geste, and I look forward to finding them and diving in. If you like adventure novels, please, do yourself a favor and pick up this audiobook in Audible. You will not be disappointed. Of all that I have heard on Audible, I believe that I may listen to Beau Geste again.

splendidly narrated and theater of the mind. I highly recommend it. I plan to read it enjoy it myself in the near future