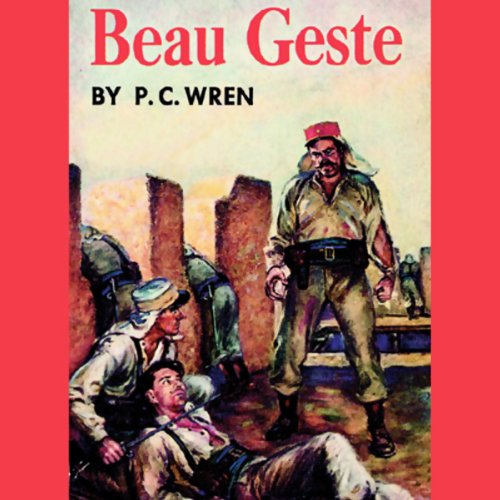 A shot rang out. The Arabs surged forward under a savage fusillade of heavy fire. Nearer and nearer they came, shouting with hate and blood-lust. Geste rushed up and down his side of the roof, pausing only long enough to load his rifle and fire into the shrieking mob below, hoping to trick the Arabs into believing the fort was heavily manned. Load, aim, and fire, ignoring the cries and curses of the wounded, the dead sprawled out in their own blood. Of all those hard-bitten veterans who had yelled their defiance at the first Arab onslaught, who had shouted with joy at the order of "Aux Armes!", only 10 remained, 10 legionnaires against a thousand Arabs.

Beau Geste is the world-famous novel of suspense and adventure, love and glory, courage, and treachery. It is the thrilling story of three men who braved the hellish brutality and ruthless savagery of the French Foreign Legion to protect the honor of a woman they loved more than their lives.

I have concluded that there is a reason why classic books are classics.

Beau Geste is a great story, with adventure, mystery, and a smattering of romance. I was expecting a desert war story, but got what turned out to be mostly a mystery.

This book is extremely well read and the audio quality is also excellent. I highly recommend it.

To start off, the narration of this work is among the very best I have heard. It is stellar. The story itself is marvelous. One of those stories that truly transports you to another place and time; in this case, in the hot deserts of African and among the French Foreign Legion. Having never read the novel, it was a total delight to come across such a fine work of story telling. If you like adventure stories and rich prose, you will like this book very much.

My favorite adventure story and favorite narrator! Beautifully written cliff hanger! If you like the sound of the sample, you will love this book.

I did not know anything about this book other than I had heard the name. I was pleasantly surprised by the story, fascinated by the narrative and interested by the author's approach to logical dilemas. Toward the end, the story was slightly slow but interesting nonetheless. It is mostly a war narrative with some interesting characters and an underlying mystery. Perhaps not recomended for those not interested in learning more about the French Foreign Legion or reading about battles. But even in that case, the issues the characters dealt with were more about the decision making process than the fighting.

The story was good but the narrator was perfection

This was one of those books that I might have dismissed if not for the narrator. The story isn't all that appealing to a sixty something woman, really more the daring do for pre adolescent boy. Don't get me wrong, I did enjoy it and I'm glad I got it, but I can see how this book would be a male favorite. The thing that made it great for me Geoffrey Howard. I enjoyed him so much I'm back to Audible looking for other books he's narrated.

one of the greatest stories you will ever want to hear... well read and perfectly written...

This was a very enjoyable adventure story. It moved along briskly and also had a little mystery.

A Classic Tale of Honor and Times Gone by

This was a great read that went fast and enjoyable throughout. A bond between brothers and their new found American friends in the legion. The narrator was fantastic and the tale was great. I can see why Hollywood like it so much.

An uneven book with some quite interesting and exciting portions mixed with protracted dull parts that do not contribute to the main story. The dialogue is at times repetitive and dull.
Old British Empire superiority and a short anti semantic portion are a little hard to take.
I don't recommend it.

How to spend time

The author it seems just wastes ink and paper as he stretches the story by repeating frequently the same things and facts. Without that the book would be 150 pages shorter .

Superb reading of a classic adventure

Beau Geste is a rich mystery adventure story. The tragic heroic acts central to the narrative would not be out of place in a Dumas novel, with the title character's destiny being particularly heart-rending.

Although unconfirmed, speculation at the time of publication was that the author had himself served in the French Foreign Legion. His vignettes of life in the Legion are fascinating, entertaining and educational. A true classic in the boys own adventure genre.

The narration in this recording is excellent with the author coping admirably with the French and Arabic vocabulary.

Glorious, heroic- but traumatic too.

This is superb- a gripping mix of mystery, the sahara, the macabre and adventure- though more than anything else it is a celebration of esprit de corps and 'doing the right thing'.

In short it is everything that one might want from an audiobook- and the narration could hardly be better.

On the other hand, I was left with a bitter taste- (not to give the plot away)- I found the over-arching mystery less interesting and less significant than the second mystery that was caused by/ contained within it.

It's no plot spoiler to reveal that the first-person narrator survives to the end and that everything is cleared up- but it comes as rather an anti-climax and a hollow victory. I was left feeling rather annoyed with P.C Wren for having put my emotions through the wringer to, ultimately, so little purpose.