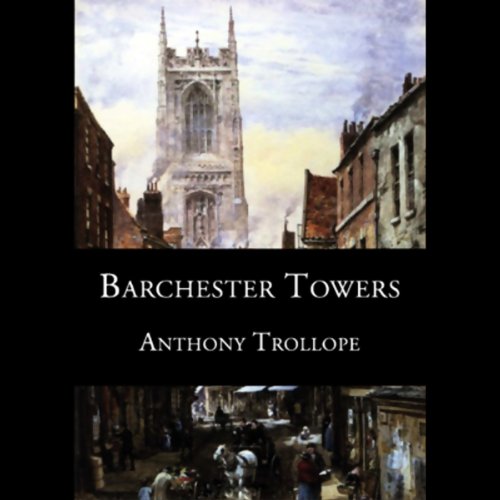 This magnificent novel, sequel to The Warden and second in the Chronicles of Barsetshire, satirizes the struggle for ascendancy among the clergy of a cathedral city. The contest is between the outgoing church authorities led by Archdeacon Grantly and the newcomers led by Mrs. Proudie and her protégé, the ambitious Mr. Obadiah Slope. Each wishes to become the dominant voice in the quiet diocese of Barchester, and they contend for the newly vacant post of warden of Hiram's Hospital.

The truth is that Barchester's leadership is really concerned with social rather than spiritual or moral issues. These intrigues, entwined through the lives of many memorable characters, provide a humorous backdrop for exploring the clash between the old and new ways in Victorian England.

Give Trollope a try

In the hope that someone might be looking here at Trollope's most famous title, I just want to put out a general plug for his novels (especially all six of the Barsetshire series.) They are very mature, intelligent reads -- truly books for grown ups. And Simon Vance (who, like many narrators, has a couple of names) is just about everyone's favorite interpreter of 19th C. English fiction. Start with "The Warden", then you will enjoy "Barchester Towers" even more. Happy listening!

Decided to read this book to fulfill my pledge to myself to read some classic literature. It very quickly turned into one of the most entertaining of the books I have read. Aside from all the Victorian nonsense, the story is quite humerus at the expense of the Anglican Church hierarchy. But perhaps the best part of the recording was the reader, Simon Vance. His interpretation was so well done, that at times I thought I was watching a movie.

If you've run out of Jane Austen novels...

If you enjoy dense, complex novels which illuminate an entire society and have a broad range of unique characters with recognizable foibles, I highly recommend this delightful sequel to The Warden. Bishop Grantly has died and is succeeded by the Rev Proudie who brings with him his domineering wife and his ambitious and manipulative chaplain, Mr Slope. Mr Slope aspires to marry the wealthy and attractive Widow Bold, nee Eleanor Harding. Will he succeed in his courtship, or will the spirited Eleanor favor the feckless Bertie Stanhope or the scholarly Mr Arabin? Will Eleanor's father, the self-effacing Reverend Harding be re-appointed as warden of the hospital, or will the position go to the aptly named Reverend Quiverful, struggling to support a family of 14? And what of the fascinating, beautiful, and scandalous Signora Neroni, (nee Madelyn Stanhope), sister of the worthless Bertie, whom all men seem to desire? Minor characters, like the eccentric Miss Thorne and the combative Archdeacon Grantly, are delineated for our delight. Siimon Vance makes each character and incident come alive in this reading. Pay an extended visit to Barchester. You will enjoy the company.

My first Trollope won't be my last

This is my first Trollope novel and I described him to some book-loving friends as an ecclesiastical Jane Austen with a definite Dickens twist. I thoroughly enjoyed this and plan to read more Trollope. The casual references to the numerous titles and hierarchy of the clergy in the Church of England can be a bit tedious for us, the uninitiated, but this delightful novel was worth it. From the slippery Mr. Slope to the domineering Mrs. Proudie, the characters are well developed with humor and irony. Very enjoyable. The narrator does a fine job. You can almost see him winking at you as he raises his brows and lowers his chin.

I had always intended to read Trollope and never quite made the time. Listening to this engaging narration by Simon Vance made such a pleasure possible while driving to work. Although one must have a taste for much more intricate prose than is characteristic of today's fiction, Vance's interpretation makes all the different characters recognizable and brings out the humor and minute social observation that keeps Trollope's intrigues of small town and ecclesiastical life in England mid-19th Century so enjoyable even today.

Simon Vance has got to be the best narrator on the planet. love this book as i do all of Trollope's work. just wanted to give a shout out to the best narrator in the business. Wish someone would hire him to do Dostoevsky's "The Possessed" or "Demons" how about Blackstone Audio? hint hint

Trollope is as relevant as today's political headlines. If we think fools and charlatans are something new, he has a lot to teach us. But there is the difference of time and language and the exact nature of political and personal offenses that might make him more distant to a casual reader or listeners to a careless reader. Simon Vance is absolutely brilliant in bringing vibrantly to modern ears Trollope's sly humor, skillful character creation and warm hearted affection for those who do right in life. I loved every minute of Barchester Towers and am now going back to listen to The Warden. And then on to the rest of the saga. Three cheers for Simon Vance!

It's very seldom I LOL at an audio-book--this one did it for me! Of course, Trollope's charming Victorian writing style had a lot to do with it, but Simon Vance's delivery was impeccable, engaging, and thoroughly enjoyable. I enjoyed this title even more than "The Warden" (book one in this series). I'm on to Doctor Thorne and am sure I won't be dissappointed!

One word of caution on this recording: it sounds like it may have been digitized from a previous analog recording. There are brief (a few seconds) sections throughout the recording that sound muffled--much like a stretched or damaged cassette tape might sound. Not overly disturbing, and it doesn't take away from the enjoyment of the work, just noticeable.

I enjoyed this second installment of the Barchester Chronicles much more than the first, The Warden, even though many of the same characters (Mr. Harding and his daughters) continue the story. Trollope has a unique way of getting inside the minutiae of Victorian society and behavior, and he does so with both affection and humor. I'll definitely continue listening to the series.

Simon Vance is delightful as always and a perfect match for Trollope's wry and hilarious depiction of Victorian England.

Simon Vance continues his impressions of characters in 1950's British films. The women suffer especially, sounding like Lady Bracknell or Gwendoline in the Edith Evans version of 'The Importance of Being Earnest'. Perhaps it's supposed to give period feel for the American market, but it's the wrong period and serves only to make Trollope's very human characters too distant to empathise with. Listern to Juliet Stevenson reading Jane Austen for how to make period characters live. Shame. It's a lovely book.

Renewed my admiration for brilliant writing - witty , economic and elegant.
The reader was also brilliant - only cavill would be with Eleanor's voice!
Great conclusion to the story of Mr Harding and his family and friends.
Loved it.