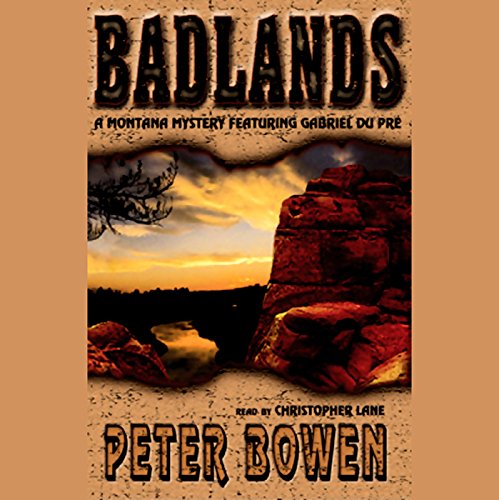 A secretive millennial cult from California purchases a ranch on the outskirts of the Montana badlands, the eerily silent, dry, and windy dead zone, and the Toussaint townsfolk are none too pleased.

The cult members keep to themselves, but the suspicious circumstances under which they arrived have Gabriel Du Pre questioning their motives and seeking answers. He soon learns from a friend in the FBI that seven of the cult's recently defected members were killed, each shot to death, but no arrests have been made. Then another shooting occurs at the perimeter of the ranch, and Du Pre finds himself blindly searching for a killer, an explanation for the murders, and the identity of the cult's elusive leader.

With Badlands, his tenth novel in this acclaimed series, Peter Bowen has written his most timely and chilling novel to date.

"Peter Bowen does for Montana what Tony Hillerman does for New Mexico....Picturesque, totally absorbing, and utterly charming." (Midwest Book Review)
"Peter Bowen writes about the rural West better than just about anyone....Gets it right over and over again." (Rocky Mountain News)

One of my longtime favorites

Well read and well written, this is a book I have listened to multiple times. As a fan of this series I am familiar with the speech patterns of DuPre, the main character, and now, thanks to Christopher Lane, I have a voice to match.
I don't care much about the mystery aspect; I just like spending time with the characters in this book - a brand inspector who drives an old retired patrol car at high speed, plays fiddle with a small band, and investigates incidents as he finds them, his fascinating wife, and the horde of grandkids, most of whom are overshadowed by a precocious grade-schooler, Pallas, that has already selected a hapless FBI man as her future husband. These books really are better when you read the entire series in order so that you come to know the characters. Diving into the late part of the series doesn't work as well; you have no understanding about the development of the people and their lives.
DuPre is a Metis, descended from French voyageurs. He has a strong accent and unusual speech patterns which I have no trouble understanding, though I tend to start thinking in Metis French after listening to this book.
Medicine man/shaman Benetsee comes and goes as he pleases, using magic as needed, and using DuPre as a tool and foil. He knows a lot of what goes on and steers DuPre in the right direction as needed.
The basic story is about a cult purchasing a Montana cattle ranch and turning it to their uses. They bring in bison and many mobile homes to house their members. Time reveals that things are not as they seem.
The best part is a bison stampede near the end that occurs when a television helicopter spooks the herd while DuPre is checking on their wellbeing. They get it all on camera while he rides for his life.
I wish more of the books from this series were on audio, and I also wish that the author would get cracking and update the series. I'm anxious to see Pallas marry her FBI man.

Dialog at its best

I love the dialog in these books, it is so well done, written so well and is so unique to the individual and quirky characters. Again, these books take you into the story, the community make you part of the story. I really would recommend this series if you enjoy a writer with talent.

Right off the bat by Chapter 3 I’m sick of the obsessive use of “said”. First book I listened too was not the case but last one and this one it’s like the author forgot any other damn verb in the English language. Even questions are ended with “said”. Not “asked,queried, wondered, inquired” etc. Pure laziness. For someone whose profession consists of words and the knowledge of how to use them....USE THEM! Same goes for his editor....EDIT! Last book by this author and I ENJOYED the stories but can’t enjoy the listen.

Isten for the narrator

These novels are good, repetitiveness aside, but the stories always feel abridged to me. Not quite plot holes, just not quite fleshed out enough. That said, i love Christopher Lane’s narration. He handles the vernacular beautifully and keeps me listening.

I like the series a lot. unique and fast moving with memorable characters and a strong feeling of place and time.

another crate story in the Gabriel Dupree saga

it's an interesting plot line that could relate to the modern world today even though it's over 10 years old. I would recommend reading the books from the beginning to get the full impact of the story this is the first time that there's been some more indigenous spiritual connection in the book that the main character embraces it's a great series

I love this narrator, the character of Palace, the storyline was excellent and lots of action!

This book is a good light read. It's got some foul language that passes for realism, and is read with your "typical" pan-Indian accent. That being said, it has a story line that picks up after about 1/2 of the book, and it gets the feel of the modern "old west" down pretty well. The narrator should be applauded for moving the story along during times when the story was rather slow.

I listened to this while traveling through the Badlands, and really wished that Brown could take a page from Hillerman and incorporate more of the local color and environment. Still, if you're looking for a mystery that is pretty straight forward, this will fit the bill.