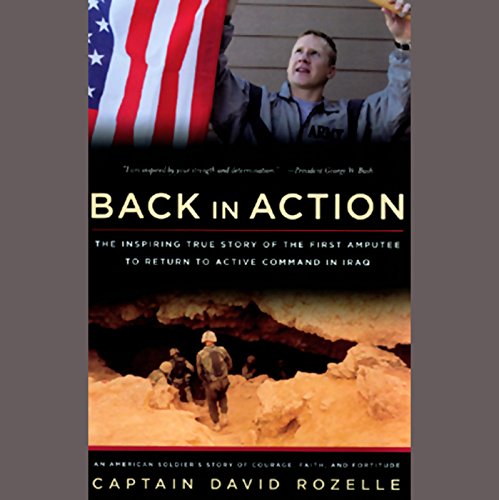 This is the inspiring true story of the first amputee to return to active combat in Iraq.

They put a price on his head. They did everything they could to disrupt his mission. Finally, when an antitank mine tore off his right foot, the warriors of jihad in Iraq thought they had neutralized one of their most resourceful, determined foes.

Refusing to let his injury stop him, Captain David Rozelle roared back into action, returning to Iraq as commander of an armored cavalry troop. He became the first amputee in recent military history to resume a dangerous command on the same battlefield.

In Back in Action: An American Soldier's Story of Courage, Faith, and Fortitude, Rozelle tells the whole gripping story: from the day he had to tell his pregnant wife that he was going to war (Valentine's Day, 2003) and deployed for Operation Iraqi Freedom, to the fateful day four months later when a land mine tore off his right foot, and then through months of agonizing rehabilitation to his final triumphant recertification as "fit for duty".

Rozelle, who has been awarded the Bronze Star with Valor and the Purple Heart, speaks with brisk frankness about his post-amputation battles and the gritty determination that carried him through it all. He recounts his inspiring battle through rehabilitation, as he learned to walk with a prosthetic foot and did his utmost to prove he still had the stuff to be a soldier: completing five sprint-distance triathlons, an Olympic-distance triathlon, the New York City Marathon, and skiing, snowboarding, and mountain climbing through Disabled Sports USA.

Back in Action is an astonishing story of courage, determination, heroism, and bedrock patriotism. It is a stirring reminder of the commitment every American should have to the cause of freedom, if we hope to continue to enjoy that freedom. It's an extraordinary and inspiring story of devotion to duty overcoming all obstacles.

A great story if determination and courage and true untiring Leadership who never. ever quit