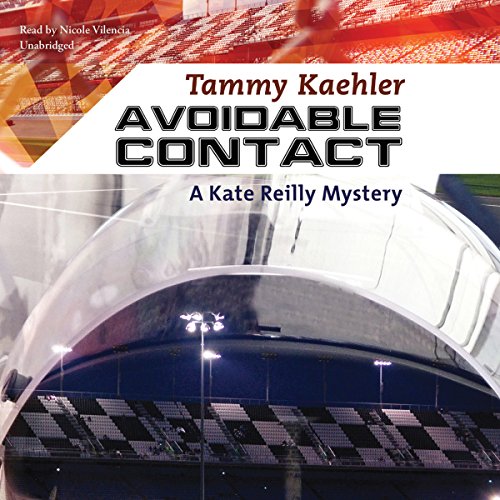 Racer Kate Reilly is suited up and ready for the start of the legendary 24 Hours of Daytona. But what lies ahead is not just a racing challenge but a harrowing test of her will and nerve off the course. Even before the green flag waves over Daytona International Speedway, Kate receives word that her boyfriend, Stuart, is hospitalized nearby in a coma, fighting for his life after a hit-and-run. Stunned by the news, Kate can do nothing better for Stuart than complete her scheduled laps driving her team's car. But more shocks follow as Daytona's clock starts ticking: An on-track accident ends tragically. Some of her complicated family is spotted with other teams - why? And an eyewitness claims Stuart was run down deliberately by someone from the race paddock.

Alternating stints behind the wheel of the team's Corvette with stretches of quizzing colleagues and searching for clues, Kate circles the police and taps every possible source - friend, foe, and family - to find out who's after Stuart and why. As the race clock counts down to zero, Kate must come to terms with her own fears rising from her past and decide who she's willing to trust.... Only then can she identify who's willing to kill to keep a secret buried.

Kate Reilly is ready to go racing as the clock clicks down over Daytona International Speedway where the legendary 24-hour auto race is about to begin. Kate is pumped up and ready to support her co-drivers of the 28 Corvette C7.R formerly of a member of the AMLS. Since the league merged with another to form the United Sports Car Championship series (USCC), Kate is pleased the Sandham Swift racing team continued in the new series. Victims of the merger clash with survivors as the green flag flies.

Amid the fans, drivers, pit crews, team owners, and media mingling on pit row, two uniformed policemen approach Kate. She must yank her mind away from the race as the men tell her that her boyfriend Stuart, USCC head of operations, was the victim of a hit-and-run accident an hour ago just outside the racetrack. His condition is critical. Kate reels with this news and begins to deliberate whether she will stay at the track or go to the hospital.

After deciding to stay, Kate starts to talk with drivers, pit crews, USCC officials, the media, car owners, team sponsors, her personal sponsor, and her personal manager. Kate’s father, whom she is getting to know following an estrangement since birth, is at the track since his bank sponsors the series. Not all drivers are professionals; some race as amateurs, privileged or rich enough to land a ride in the single race. Members of Kate’s new family are among them. Her maternal grandfather joins in via her cell phone with words of wisdom and advice. Each tugs Kate in a different direction.

Kate must push them all away as she dons the last pieces of her racing gear and climbs into the car for her driver stints. Again we are treated to pure racing inside Kate’s head as she goes through the steps of piloting the car. We sit with her as she peeks at an accident she drives by, dismayed to see it involves the Sandham Swift 29 Corvette.

Kate deals with the myriad of feelings cascading inside her trying to discover a motive for Stuart’s accident which may be related to the track accident which may involve family and others too numerous to name. Over the course of the 24 hour race, Kate’s trusted friends help her piece together the mysteries they face.

Suspenseful events on the track are interspersed with Kate’s fact-finding missions. The race countdown throughout the narrative ratchets up excitement. I felt Kate’s constant dialogues between her stints as driver somewhat tedious. I tired of constant “what ifs,” speculation, and Kate’s paranoia over trust issues . In the end, Kate’s searching does provide answers, but by book and race’s end, I wondered how much difference the answer would make. It is up to Kate’s father to determine who comes first – Kate or the members of the family who crashed and raced the Daytona 24-hour endurance race. Kate is left unsure of new family relationships but solid in her continuing racing career.