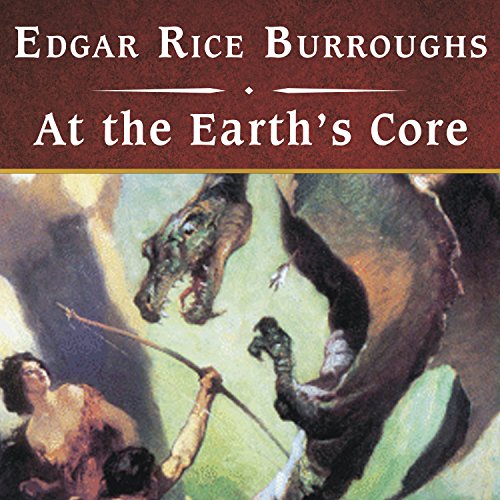 David Innes is a young man who has just inherited a large mining company. An eccentric inventor, Abner Perry, convinces Innes to underwrite a project to build an 'iron mole,' claiming it will make them both wealthy. The mechanical beast works well, actually too well. On the maiden voyage, instead of digging for a few minutes and returning, they plunge straight through the earth's crust into the 'inner world' of Pellucidar. This world resembles earth but is a horizon-less, primeval tropical landscape where the sun neither sets nor rises, and is populated by 'Sagoth' gorilla men, wild human slaves, and the ruling hypnotic reptilian 'Mahars.'

Upon arrival at this strange world, the men are immediately captured and enslaved. But soon Perry learns to read the language of the Mahars, and discovers a secret way to turn the tables! True to Burroughs form, this nonstop fantasy thriller weaves together savage islanders, pterodactyls, telepathy, and, of course, romance.

Sci Fi and Romance before Raiders of the Lost Ark

Sci Fi and Romance, constant thrills, all the staple of ERB's writting, is epitomized by At the Earth's Core. This story is not subtle nor believable, but neither was the Raiders of the Lost Ark. It is sheer entertainment, something to listen to when driving, doing the dishes or gardening. If you never read ERB, I suggest starting with Tarzan or John Carter's Mar series, their story line is better developed, but if you enjoyed those, you will enjoy At the Earth's core.

could not stop listening

my first audio book, and loved every minute of it. i have a long commute every morning to work and them home also. i found myself taking the long way there and home to keep listening. i love the out of box ideas this author comes up with. even though i knew there no way possible it could be true i found myself believing in it as i listened. anyone who's listens to this must follow up with the sequel Pellucidar. it is a great ending to the whole story...

Written two years after A Princess of Mars, ERB must have had a problem coming up with new ideas. This plot is taken directly from A Princess of Mars. He is naked, falls in love with a scantly clad Princess, kills for her, insults her through ignorance of the culture, etc. Read A Princess of Mars first, if you like it then read this. If you do not like it, this is worse. The one improvement is the scientific way he gets to the center of earth.

Patrick Lawlor sounds like he was bored with this book. I don't blame him, but.

The narrator did an excellent job. Most books that are narrated are very monotonous. I will try another Audible book because I enjoyed this one so much.

Excellent, old but a great story

I highly recommend this story, if you like Jules Verne's Journey to the centre of the earth you can not go pass this highly imaginative story.

Very different yet just as compelling

could have been better with a few small tweaks but is still a good adventure story.