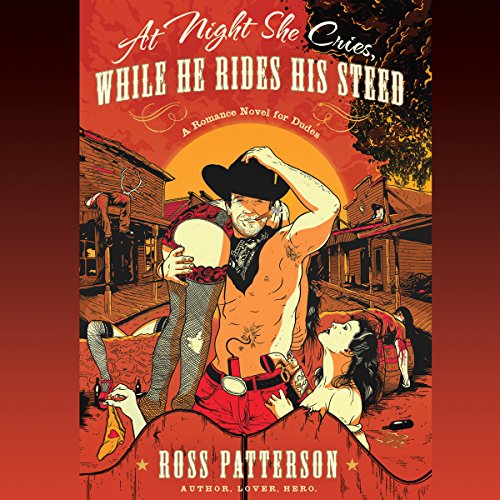 At Night She Cries, While He Rides His Steed

Saint James Street James is a tall, extremely muscular, 32-year-old man whose attributes and possessions include a mind stronger than Socrates on acid; a magnificent horse he loves more than anything in the world; a package so large that it requires a signature; a beautiful, passionate wife with a rack so perfect it belongs on a billiard table; a shit ton of children; and his own personal gold mine. His life, set in 1849 against the backdrop of the California gold rush, is one long parade of amazing sex, dynamite montages, and whiskey. But when the Schlager Brothers come to town, so too comes the end of the good times. St. James is forced to defend everything that matters to him. God help anyone who stands in his way.

Funny as hell!! Can't wait to see range 15. Ross is funny as hell, not for the easily offended!

Who, exactly, thought this was a good read? I'm baffled. I wasted a credit on this rubbish some while back. I based the purchase on rave reviews. Funny, they said. Good time, they said. Who said? This book could only appeal to an adult male with the mind and maturity of a 10 year old pig. I say "adult" only because it should be rated triple X from chapter one. Starting with what seemed an endless stream of detail infused graphic sex, sex, and more sex, it moved on to an insultingly stupid fantasy about an immature, racist, narcissistic, sexual predator cowboy who either insulted or killed every male, then had sex with every female he crossed paths with. He gleefully abused his wife and kids. He did love his horse, but that's the only good thing I can say about the protagonist. Sure, it's tongue in cheek, but come on. There's funny, and then there's this swill trying way too hard and falling way too short. I tried listening to this so called "book" several times in the past, but each was a false start because it disgusted me to my core. Until recently I had a backlog of other books to switch to after trying then quitting this one. Finally, this was all I had left until my next month's credit, so I reluctantly started again. No, I'm not a prude. This is simply vulgar pornography, intolerant bigotry, crude and crass from the start to... well, to where I quit when I just couldn't stomach anymore. Take out the porno, the racism, the woman and child abuse, the bloody murder, and the drugs, and you have a 20 minute tale about a cowboy who lost his money, sailed to China to find his fortune, then came home. Period. That's the crux of the entire book. My last attempt to stay the course, push through the insulting crap this author somehow managed to get published, hoping I might find a worthwhile story hiding under all the garbage got me to within an hour and a half of the finish line, but again, I just couldn't take another moment of this sewage. I quit reading and decided to justify my lost time by warning others to stay away. And on an admittedly petty note, the reader adds an "s" to any word ending in a hard consonant. Normally I wouldn't mention such a small annoyance, but I believe the author and the reader are one in the same, and this guy deserves all the disparaging criticism that can be heaped on. Maybe he'll get discouraged and find something productive to do, like scrubbing toilets.

lovely romance for men. I can not wait for the sequels Ross is an angel and a genius.

RELAX, IT'S NOT GAY

PUN INTENDED
St. James Street James (named after a spot on the Monopoly Board), is the kind of guy EVERY MAN WANTS TO BE LIKE. I thought the book was funny from the get go, but was worried the first couple of hours that there would be no plot. Then when his son named TOTALLY MEXICO, often referred to as TOTALLY FUCKING MEXICO, was killed, all of a sudden there was a plot. The story and main character grew on me to the point that I was laughing out loud and interested in how it was going to end.

YOU GIVE THOSE WHORES AN INCH, THEY WANT THE OTHER SEVEN.
This is filled with lots of sex and lots of foul language. The sex is often and explicit.

I THEN KICKED HIS DEAD BODY, BECAUSE WHY THE FUCK NOT
Most of the blood and gore is not that explicit, but I did catch myself cringing a couple of times

WHOEVER SAID MONEY CAN'T BUY HAPPINESS, WAS OBVIOUSLY FUCKING POOR.
The author is the narrator and he does a great job, sounds like a crew of people.

I'M NOT GOING TO APOLOGIZE FOR BEING A MAN
I have OLD MAN STRENGTH and I really liked this sophomoric, politically incorrect, roll on the ground funny book. If you got the BALLS to get this book and love it, than you will also want to check out, Pandora's Box, by Jack Iceflo Jackson.

The funniest book ever! The cast was incredible!

This was the funniest book ever. So good, I had to listen a second time.

Best ever novel for guys...

You will be happily surprised by the voice acting, character building and pure entertainment. Ross and Jessie are amazing. You’re welcome for their service!

if guys drive big trucks to compensate for having a Snell dick, the guy that wrote this book has the smallest dick in the world. it is truly hilarious and outrageous. looking forward to part 2 and however many more come after that.

If you haven’t listened to this book then you are a fool. Download this thing and listen to it. Again and again!

This book was fantastic. It gave me hope in the future of novels. I’m so thrilled for the next book and the rest of the series.

Funniest book I've ever listened to

I said it all in the title. Apart from I can't wait for the squeal