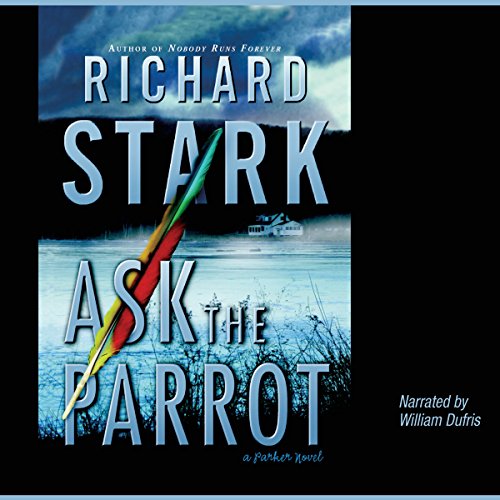 Racing through the backwoods of Massachusetts and on the verge of being taken down for one of the biggest and most disastrous bank heists the state has ever seen, Parker runs right into the barrel of a gun pointed from the wrong side of the law.

A quiet and angry recluse with only a silent parrot for company in his seclusion, Tom Lindahl saves Parker from the police dogs, but enmeshes him in yet another in a long line of dubious, highly dangerous, but seriously profitable jobs.

Far more than some aimless indigent, holed up in a shack in the woods, Lindahl is a man built on rage and driven by a thirst for revenge. A whistleblower whom nobody heard, a man tossed aside by a corrupt political establishment, Lindahl plans to rob them of their lucre and needs Parker's help.

©2006 Richard Stark. All rights reserved. (P)2006 BBCA
"As with any Parker novel, things go to hell in bits and pieces as the tight-knit plan unravels, while Parker, ever the cold-blooded professional, deals with the pitiful attempts of amateurs and law enforcement alike to bring him down." ( Publishers Weekly)
"Dufris's delivery of the characters' voices, complete with local accents, is totally believable. Author Stark is also known as Donald Westlake." ( AudioFile)

Ok. Not as good as some of the others,

but I still enjoy reading Parker.

Parker is in the woods fleeing after a robbery. A local guy Tom sees Parker and realizes he’s one of the robbers. Tom wants Parker to help him rob a racetrack. Tom introduces Parker to other locals telling them Parker is a friend visiting. Parker joins the locals as they hunt for Parker. It’s pretty good watching Parker interact with various local people.

Minor complaint. A security guard sees car lights at an unusual time. He goes to investigate, but the author did not tell what happened as he investigated. (Or maybe I missed it.)

The narrator William Dufris was ok, but not good for this series. He made Parker sound too ordinary.

THE SERIES:
This is book 23 in the 24 book series. These stories are about bad guys. They rob. They kill. They’re smart. Most don’t go to jail. Parker is the main bad guy, a brilliant strategist. He partners with different guys for different jobs in each book.

If you are new to the series, I suggest reading the first three and then choose among the rest. A few should be read in order since characters continue in a sequel fashion. Those are listed below (with my star ratings). The rest can be read as stand alones.

My wife and I were loving this classic Parker while on a long drive home when nothing made any sense. It seemed as if something was missing, and, sure enough, when I consulted the hard copy, I discovered the Audible version had skipped several chapters just before the conclusion. Not sure if it's worse if they did it on purpose or by accident, but it's entirely unacceptable either way.

Parker does it again!

What did you love best about Ask the Parrot?

As usual, Parker's logical approach to every situation, with nerves-of-steel, always prepared to do what he must to stay alive and free. He has a gift for psychological insights into what makes people tick.

The convoluted twists and turns with these interesting characters.

His ability to portray the different characters.

No, although these Parker stories are short, like novellas. These are great books for a day at the beach.

Either you like the Parker series, or you don't. I love this clever anti-hero. Just wouldn't want to ever meet up with him! (Glad this is fiction.)

Well done written story , I enjoyed the story for the most part Parker's a real go getter and joy how he manipulates the other characters and basically gets way with murder haha

A Favorite of the Series

I love the Parker series, Ask the Parrot is one of the top in the series! A must read even if you haven't been through the entire series. The only complaint I have is Book 21 and 22 (Breakout and Nobody Runs Forever) are not available in audio, so I had to skip from Firebreak to Ask the Parrot! Not a deal breaker to enjoy the series as Stark geniously writes each book with a true end, which is always abrupt and unexpected, in a good way,but leaving you wanting more!!! Sadly I'm off to the last in the series