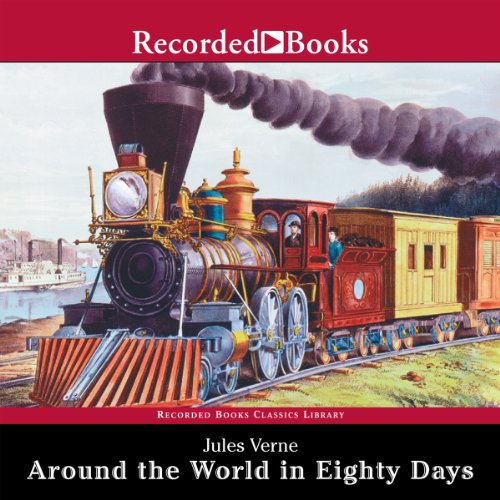 Around the World in 80 Days

Filled with fantasy, comedy and grand suspense, Around the World in 80 Days is classic entertainment that is sure to enchant listeners of all ages. When an eccentric Englishman named Phileas Fogg makes a daring wager that he can circle the globe in just 80 days, it’s the beginning of a breathlessly-paced world tour. With his devoted servant Passepartout at his side, Fogg sets off on an adventurous journey filled with amazing encounters and wild mishaps. Pursued all the way by the bumbling Detective Fix, who believes the two travelers are bank robbers on the run, Fogg and Passepartout must use every means of transportation known to 19th-century man - including a hot-air balloon, a locomotive, and an elephant - to win the bet. When Jules Verne’s delightful tale of two globetrotting gentlemen first appeared in 1873, it won the hearts - and imaginations - of readers across Europe. Published chapter by chapter over the course of many months, Around the World in 80 Days aroused so much excitement that readers placed bets on the outcome of Phileas Fogg’s race against time.

We Cheered at the End!

My kids (ages 10 and 6) listened to this book together. We enjoyed it thoroughly! Patrick Tull's characterizations were impeccable, especially that of the French servant. I found myself very involved in the story, and looking for every opportunity to turn it on.

For parents who might be selecting this for your children, be aware that the language is difficult to understand at times due to the more formal style of the unabridged text. My daughter (age 6) had a tough time understanding some of the syntax, but a third of the way through or so she seemed to adjust to it and was able to follow the story much better. She enjoyed the story very much, and when it ended all three of us literally cheered!

A Classic Not To Be Missed!

Thrilling and charming adventure. This was a sheer delight and I am at a loss as to why I have not read this book earlier. Delightful in every sense of the word. Endearing characters and pure escapism. The performance by Patrick Tull was sublime. He was perfect. The tension and excitement he created were spine-chilling at times. One of my favourite books and I have listened to it twice already. Fabulous!!!!

I believe there'll be many who may react strongly to this but I think many of classic literature are not as fun to read as some of modern titles. But it is so for me. I can't help thinking this way.

So I tend to be very selective when I choose "classics."

And when it comes to "Around the World in 80 Days," I do recommend it with two thumbs up (four thumbs up if I've had another pair of hands) even if you are bored by old-fashioned language and sometimes slower pace as easily as myself.

I'm amazed at how Jules Verne, a French author, could offer such details so smoothly in the late 19th century.

I wouldn't say further lest this review becomes a spoiler for you. Just get this audiobook and enjoy!

Jules Verne was an excellent writer and this is one of his great, classic stories. It is a fun romp around the world and the characters are very engaging, especially Passepartout who provides the main point of view for the reader as well as a catalyst for a lot of the action. The book builds to an exciting and satisfying conclusion.

It is read by the great Patrick Tull who is famous for reading the Patrick O'Brien novels (which is why I chose this particular book). Tull imbues each character with their own personality, he really was one of the best readers.

I highly recommend this book, it is also a great family book.

A straightforward adventure/exploration story. Verne is a master at capturing the magic of geography. He juggles all that while also letting the reader ponder the wonders of technology and the industry and honor of man.

Again, the biggest limit to Verne is his poor 19th-century translators and editors and in this novel perhaps a tad too much colonial attitude. Verne's inaccuracy about Mormons is funny, but illustrative of the weakness found throught the rest of the book. Verne seemed more adept at speculating about the future and technology than observing the present and people.

What made the experience of listening to Around the World in 80 Days the most enjoyable?

Actually a bit disappointed. This was because the movie is such a favorite. The screen play is really much more detailed, compelling, colorful and enjoyable. Many of the pivotal scenes in the book are only lightly detailed and pass without the detail that one might want. This is one of those cases where the movie was actually an improvement on the book.

I only wish I had read this sooner! Wonderful adventure story! Would highly recommend this book to anyone seeking adventure

An exciting book for the whole family!

The book moved along at a nice pace, and the subplot of the thief kept us wondering. We used the story as part of our geography lesson, and we tracked the main character's movement throughout the story. The reader did a great job on all voice performances, too.

The characters and the suspense of the story.

The bartering for the elephant scene.

It was too long for that, but we did use it on a long car ride. Perfect! Everyone enjoyed it.

Great story from 19th century. Makes you want to travel. Good narrator as well. The story can be listened to in small chapters. Great for kids.

it was an entertaining experience well performed . I think it is well worth a read as long as you keep in mind that it is quite a nationalist narrative

Lovely story well told and kept you gripped the entire way around the world. Enjoy.