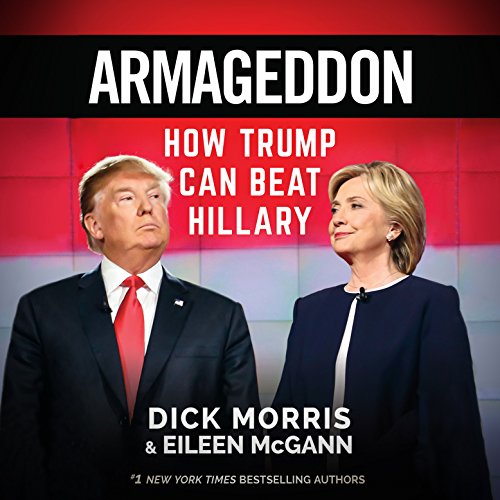 Timed for the critical presidential election season, New York Times best-selling author and noted political commentator Dick Morris provides a strategy and position on the issues for Republicans to attract crucial new voters to the party in order to win back the White House in 2016 and put an end to the Obama agenda of ruinous socialism. By using new issues, attracting new voters, and offering new alternatives, Republicans can win the election of 2016 and save America! This book will be must-listening for pundits, politicians, and voters alike who are looking to end America's decline and get on the path to prosperity again.

What did you love best about Armageddon?

Most compelling is how much evidence there is to support Trump over Hillary.

Which character – as performed by Ian Patterson – was your favorite?

The narrator is quite good. He has a clear pleasant resonant semi-soft voice. However I think the material would better fit a voice that had at least the hint of, say, a hardboiled newspaper editor, or political consultant, which the narrator is probably talented enough to pull off.

On issues, the only major disagreement I have with the author is that I do not believe it is a good fit for the Historic American Nation to have hundreds of thousands of standing troops stationed all over the globe. In fact, that we have become an empire is one of the reasons we are ruled by an open-borders Occupation Government and that we now need a hero like Donald Trump riding to our rescue.

Utterly shocking but also enlightening regarding some of Hillary Clintons misdeeds. It also raised some interesting points for those in other nations that may need to be looked at through their own political lenses.

How has someone so evil remained untouchable for so long. This is full information everyone should have before the election this fall.

Loaded with important facts and strategy for Trump to defeat Hillary in the 2016 presidential race for the white House.

Great read. Listen to it around your undecided friends!

Top notch performance and information from Dick Morris .and here is to knowing Trump will win!

Crooked Hillary is a fitting name for her!

I appreciated all the facts, dates, figures. I'd like this book to be required reading.
The narration was great but the contents is eye opening. I'm recommending it to everyone I know.

Every American should read this book!! Dick was an insider with the Clintons and has honest testimony throughout.

Informative and practical a must read

A very engaging and informative book. Filled with practical solutions to the country's problems. A valuable lesson on the evolution of politics and why the establishment is failing us. This book does a great job of presenting the problems and what we can do to bring win our country back, while keeping it interesting and relevant. Learn all you can, while you can if you plan to vote in November!

Every American needs to read this book. Who better to give us a clear picture of Hillary Clinton than someone who used to be tight in the Clinton camp? It will cause you to rethink many things you thought you knew about the Clintons, and confirm others.

The only thing I didn't like was the narrator's insistence on trying to copy the voices/inflections of the people he was quoting. It was very distracting, especially when each time Hillary was speaking, I saw Mrs. Doubtfire in my head.

Great book, ingenious strategy for using Hillary's weaknesses against her and dividing her base by addressing their real issues rather than what she tells them the issues are. Excellent analysis of what has gone wrong with America.

Every Swing & Democrat voter should read this.

I've recommended this to friends. It's a revealing book written by someone who knows first hand what's been going on in the Whitehouse. It's a little repetitive at times but maybe that's done to reinforce the Clinton shenanigans. God help America if HRC becomes the next US President. Obama has a lot to answer for but under HRC things can only get worse - the government will be run by puppeteers.

What was one of the most memorable moments of Armageddon?

Exposure of what has been going on.

Frightening to think what will become of the USA if HRC becomes the next President. I believe HRC wants the job purely for her vain personal reasons (Wants to make history as the first female US President - but she's no Thatcher or Merkel) but not for the good of the country. America is great for welfare handouts but if this carries on who's going to pay in the long term. Bill had personality but that's about the only good thing about him, his behaviour in office was shameful. Hillary has the personality of a greasy chip bag and a husband who's example is best forgotten - certainly not one to follow. Since it seems Hillary is hugely influenced by the ideas & opinions of others and is so cocooned that she is out of touch with the real world, only HRC will benefit by keeping her first class ticket on this gravy train.
I'm not much for Trump but at least he's funding his own campaign and has experience of running hugely successful business. He says some dopey things but overall, I'd trust him any day over HRC & Co.