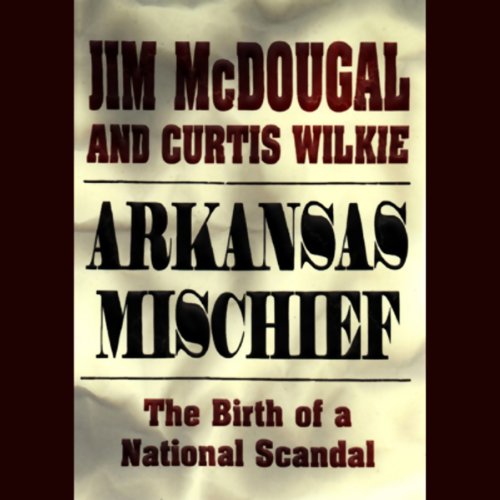 As Bill Clinton's political and business mentor, Jim McDougal, with his knowledge of embarrassing real-estate and banking deals, bribes, and obstructions of justice, long haunted the White House. McDougal's vivid self-portrait, completed only days before his death and coauthored by veteran journalist Curtis Wilkie, reveals the hidden intersections of politics and special interests in Arkansas and the betrayals that followed.

It is the story of how ambitious men and women climbed out of rural obscurity and "how friendships break down and lives are ruined". Anecdotes fall like bright coins from a raconteur's rich purse.

"Whitewater" is shown for what it was, a venture in land speculation that fell victim to mismanagement and high interest rates. Lies and cover-ups were the inevitable result.

Vintage political history, Arkansas Mischief is a southern tragedy with lessons for us all.

"[A] lively and engrossing excursion through the Arkansas culture that spawned McDougal and Bill Clinton." (The New Yorker)
"His book shows more than anything yet written about Whitewater that the human drama of this scandal may outlast even its political effects." (Wall Street Journal)

Interesting but very self serving

It was interesting to hear this story from his point of view, but it was not really the whole truth. And the way he defends Bill Clinton (who slept with his wife Susan and lied on the stand in court!) and the. crucified Hilary Clinton puts his credibility in question. Hard to believe a lot of his story.

first time audible recommended a book that I enjoyed. great story on how politics worked in Arkansas and how it works now and how connections in government help one succeed..also on what scumbags clintons were

This is a revisionist biography. The title is totally misleading. If my memory is correct, the Clinton's were first mentioned in Chapter 8. I don't blame McDougal for wanting to tell his story, his way, at the end of his life. However, I fault Wilkie for letting this book drone on with a totally misleading concept.

I listen to a lot of political books and books on history and I had set the bar fairly low for this one but ended up loving it for the story and the narration.

THE TRUTH ABOUT THE WHITEWATER SCANDAL

Would you consider the audio edition of Arkansas Mischief to be better than the print version?

I HAVE NOT READ THE PRINTED VERSION

What other book might you compare Arkansas Mischief to and why?

Which character – as performed by Lloyd James – was your favorite?

HOW THE CLINTONS BEHAVIOR IS CONSINSTANT THROUGH THE YEARS

I LOVED THE STORY. I CANNOT APPROVE OF SOME THE LANGUAGE. IT WAS UNNESSARY FOR THE STORY. OTHERWISE, THE BOOK IS VERY INTERESTING AND INFORMATIVE. I WOULD RECCOMEND IT.

No more Clintons in the White House

And I thought I didn't like Hillary BEFORE I listened to this book. Jim McDougall is no saint, but this books makes me feel sorry for him.