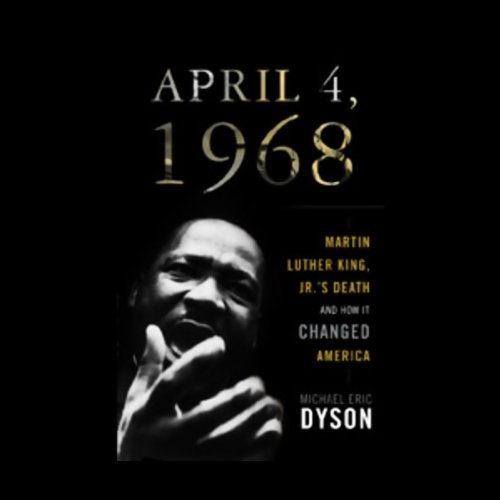 On April 4, 1968, Martin Luther King, Jr., the prophet for racial and economic justice in America, was fatally shot. Only hours earlier, he had ended his final public speech by promising that "we as a people will get to the Promised Land."

Now, at the 40th anniversary of King's assassination, acclaimed public intellectual Michael Eric Dyson gives a comprehensive reevaluation of the fate of America, specifically Black America, since that date.

Ambitiously and controversially, he investigates the ways in which we as a people have made it to that Promised Land King spoke of, and the many areas in which we still have a long way to go.

April 4, 1968 takes a sweeping view of King's death, remembering all the toil, triumph, and tribulation that led to that fateful date while anticipating the ways in which King's legacy will affect the future of the United States.

With so many books about Martin Luther King, Jr. on the market and with a flood of new ones recently published to capture the interest surrounding the 40th anniversary of King's murder, why pick up another one?

First, Michael Eric Dyson has proven to be one of the most engaging and thought-provoking social commentators of the past few years. Second, he brings both his deep intellect as well as his accessible communication gifts to this tribute to Rev. Dr. King, and the impact of his life and death on our society. Dyson does a great job of setting April 4, 1968 in the context of the time, reflecting of King's difficulties and depression, as well as his notoriety and success. But more than merely a tribute to a fallen leader, Dyson also examines the aftermath, both good and bad, especially within the African-American community, but also for our world as a whole. A powerful "literary license" is Dyson's epilogue, an "interview" with King on his 80th birthday--a truly thought inspiring chapter.

With a host of volumes about King on the market, this one is well worth exploring.

This is truly a great book it not only tells about the tragic day that Dr. Martin Luther King, Jr. was assinated, but gives a history of the other people involved. And how each of the players were involved with King. As well as where they are in 2008.

The reading by the author, Michael Eric Dyson, makes the book espesially good. I highly recommend this book to all who loved King as I did.

Excellent book to Read on King!

I always enjoy reading books from Rev. Dr. Michael E. Dyson. He always knows how to fabricate sociology notion, academia concept and spiritual connection to the books he has written. This book is no different about Martin Luther King, Jr. In addition, what I enjoyed listening to it now after the Administration of President Obama; I can analyze how far America has really come not only 49 years after King's death but also after the tenure of President Obama's administration. Again, good book, would recommend all to read/ listen if you are a King Theologian.

If you've ever had a curious eye for the struggles of our civil rights leaders, this book delves deep into a pocket a history and shares nuisances that broadens your appreciation of our heroes.

I applaud the author of this book as it was very well done. I learned a lot from it!

must listen! love it

ingenious, book
I love the what if king were still alive chapter at the end.

I have always loved Michael Eric Dyson as a speaker, writer, social critic and historian; Now I must add to this impressive list, voiceover artist and impressionist. He is a true wordsmith. His vocabulary is simply remarkable. I am always learning new words and their meanings reading when I am listening to Dyson. His love and mastery of the English language has very few equals. He, like Seth Andrews or David McCullough, are among the few authors who can narrate their own written works and do them real justice. Among the great highlights of this book is Dyson's remarkable impression of Dr. King.

More about MLKs environment than the man

I didn't perceive this book to be as much about MLK's life at the end of his life than about dealings with his contemporaries. I was fascinated by the information shared about Jesse Jackson, James Brown, and Al Sharpton.
Michael Eric Dyson is a true master of the English language. His lexicon is to be envied and command of words common and uncommon made me want continue listening just to hear him speak. I plan to buy more of his books to gain the insight he brings to the political conversation.
I learned more than I thought I would about the political landscape of the country during Dr. King's time on earth.

i always enjoy books from Mr. Dyson. He always has good details and research on the topic. Almost first hand information that you can tie into what you already know. it puts a better perspective in place and makes sense.

Very well-documented biography on Martin Luther King Jr. with an interesting backdrop on his influence and relationship to other Civil Rights leaders. It was, also, an interesting nuance to project what a live interview with MLK would possibly yield today. Some of it was prophetic.