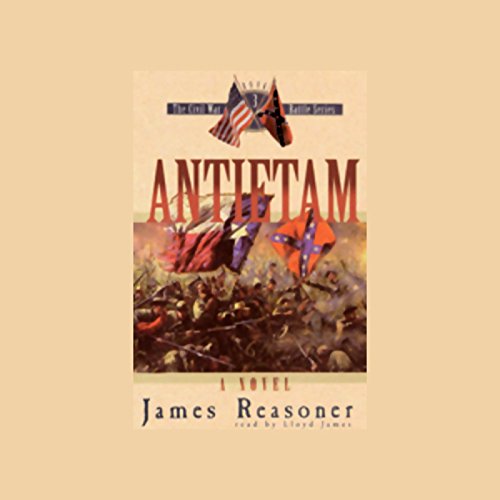 Antietam is the third book of eight spanning the Civil War and describing its effect on one southern family. The Brannon brothers answer the call to arms at different times, and the family finds itself struggling with dilemmas it never had considered.

In early 1862 the war comes within view of the Brannon family farm in Culpeper County, Virginia. The din of drilling soldiers sweeps over the quiet countyside, and another son of Abigail and John Brannon answers the call to arms. A gifted horseman, Mac, joins Jeb Stuart's cavalry and soon finds himself on one of the greatest adventures of the war.

The anticipated spring offensive pitches the Union and Confederate Armies against each other on the Virginia Peninsula, and it appears that Richmond and the fledgling Confederacy are doomed. As the Southerners fall back before the slowly advancing Northern army, Mac is reunited with his older brother, Will, when Stonewall Jackson's triumphant troops arrive from the Shenandoah Valley to blunt the Federal onslaught. Following the fighting at Seven Pines, the brothers witness firsthand the reversal of Confederate fortunes when Robert E. Lee is made commander of the Southern army.

While love blossoms on the Brannon homestead, Lee's army strikes a stunning blow to the Northern army on the peninsula then crosses the Potomac River into Maryland. When the Federals intercept the Rebels near Antietam Creek, the two brothers are brought together in the bloodiest trial of the war thus far. The air is thick with shot and shell as wave after wave of the Northern soldiers are hurled upon the Southern lines grouped near the town of Sharpsburg and a river of death.

Really the Battle of the 7 Days

In this the 3rd book in the series -- clearly the best so far. The author has placed different Brannon family members in with different parts of the Southern armies and you get a much fuller sense of the Civil War. While the title is Antietam, I felt the real story is in the excellent job of telling the good and bad of the 7 Day's battle in front of Richmond. I will definitely continue the series

On goes the soap opera

We're really getting into the character development now and really care for how they are faring in the war although personally I feel that two of them, Titus and the mother are a bit two dimensional and need "fleshing out" a bit. Nevertheless I will admit to being a bit choked listening to the reunion and if that is a reflection on how good a listen it is its a good book. Lloyd James continues to bring the action to life.