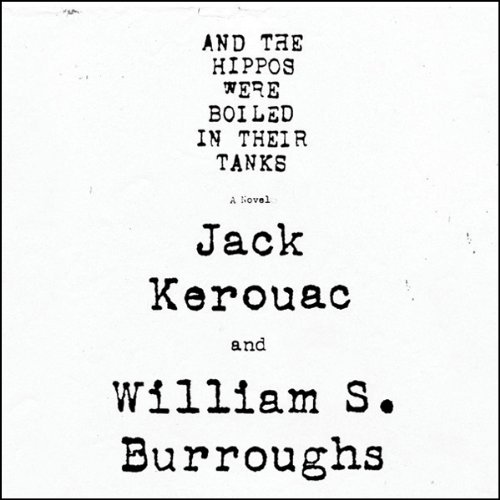 And the Hippos Were Boiled in Their Tanks

More than 60 years ago, William S. Burroughs and Jack Kerouac, two novice writers at the dawn of their careers, sat down to write a novel about the summer of 1944, when one of their friends killed another in a moment of brutal and tragic bloodshed. Alternating chapters, they pieced together a hard-boiled tale of bohemian New York during World War II, full of drugs and obsession, art and violence.

The manuscript, named after a line from a news story about a fire at a circus, was rejected by publishers and confined to a filing cabinet for decades. Now, for the first time, this legendary collaboration between two of the 20th century's most influential writers is being released. Both a fascinating piece of American literary history and an engrossing, atmospheric novel, it brings to life a shocking murder at the dawn of the Beat Generation.

I was skeptic... lost book? Burroughs and Kerouac? Does the phrase "too good to be true" come to mind. Yet, to my delight, this could turn out to be one of my favorite pieces of midcentury counter-culture lit. Jack and William take turns with chapters, allowing a really neat multi-perspective view of the controversial plot. Ray does a great job reading, as usual. The epilogue is a great treat, the true story behind the novel.

Cant remember how the authors main works was. I know I read both Naked Lunch and On the Road, but at a time of life I could been one of the characters (or atleast I had some of the more unhealthy vices (?) of the authors). This was a very both enlightened and educational about the era. I knew people in US could buy some medication packs including amphetamines and morphine to the soldiers in Europe for both "recreational and increased efficiency of the soldiers" (not a quote), but I was surprised at how the use of morphine was such a natural thing at this time.

Not a great story.

Put into the context of a biography written many years before the characters/authors of the Beat Generation, this story is interesting.

As a stand alone piece, the story is not very good.

Better To Read, Not Listen

Let me start off by saying the narration in this is fantastic. Porter does a great job throwing his voice to a multitude of different characters. However, I found the story’s structure hard to follow as an auditory piece. I was driving while listening so maybe it’s better off not being heard while multitasking. Either way, I felt as though I would have enjoyed this story better had I read it and not listened or read then listened.

Painful but captivating. Interesting to know it was based on something that actually happened. I didn’t expect that but was glad to know.

I had no idea this one existed. The telling of a true story were the names have been changed.

If you could sum up And the Hippos Were Boiled in Their Tanks in three words, what would they be?

The movement between chapters made it impossible to stop listening.

I felt like I was listening to the authors telling their story.

Dare I say this may be my favorite Kerouac?

I wish I had read the other reviews before I bought this. It's awful. I can't even finish it and I ALWAYS finish any book I've started. It just makes no sense; it's very difficult to follow along.

Don't these narrators realize they are PERFORMANCE ARTISTS? But at least with Burroughs you can rely on the depravity being way over the top. Just the way we like it.

A Reversal of Fortune

I am not a natural fan of Beat literature, so this book had to work that bit harder to convince me. It did. Unlike most books which start with a bang and build, only to end like a sweaty limp handshake - unsatisfactory and vaguely repulsive, this book starts slowly and unconvincingly but builds to such an earth shattering crescendo that both literally and artistically shook America. I also think that this book would work better as a physical book, rather than an audiobook, I was frustrated by my inability to flick back and forth through it. Overall, recommended and encouraged, and give it time to grow on you.

What disappointed you about And the Hippos Were Boiled in Their Tanks?

if you've read the schpeel and know it's about a murder then that is the only interesting bit spoilt, it is also dealt with in the last 20mins. This is not hard-boiled and full of sex and violence but a few dreary fumblings and a murder that is bearly mentioned. It doesnt tick any box, not pulpy enough to be pulp, not artistic or poetic enough to be art. The 2 writer's different viewpoints and styles is a little interesting but nothing really happens. There is a great story to be told, just look up the real murder on wikipedia. And if wikipedia do a better job than, not one, but two writers you are doing something wrong. Love the title but this should have never seen the light of day

If you could play editor, what scene or scenes would you have cut from And the Hippos Were Boiled in Their Tanks?

I would open with the murder (as promised on the back of the book), then present flashbacks to how it got to that point. The obsessions, the relationships between characters, the creepiness. Little things suggested in the beginning of the book, playing out to the final outcome. Things develop to a feverpitch, present it as a suspense novel. None of that is in this novel.

It could have been a Hitchcockian style thriller suspense, or a good character study, or an atmospheric portrayal of New York in 1944. But it is none of those.