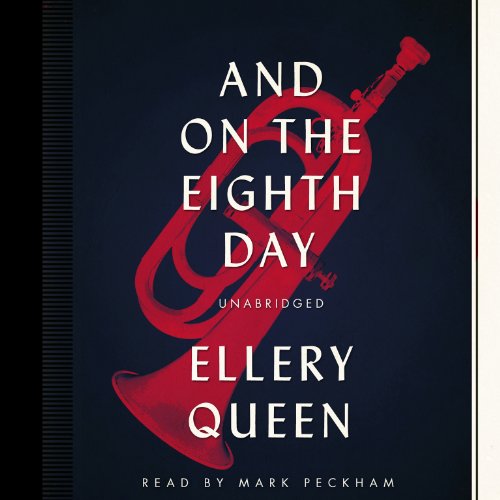 While stranded in the desert, Ellery Queen stumbles across a religious cult.

It's 1943, the war is raging, and sleuthing scribe Ellery Queen wants to do his bit. After a tortuous cross-country drive, he takes a job writing scripts for a Hollywood propaganda house - twelve hours a day of hack work that quickly turns his mind to jelly. After a few weeks, he is so worn down that he can type nothing but gibberish, and he decides to drive home. The trouble starts as soon as he reaches the desert.

His ancient roadster breaks down on the edge of Death Valley. Wandering in search of help, he is saved by a man known as the Teacher, who takes him to an oasis called Quenan. Here, Queen finds a bizarre, reclusive cult that seems to have come straight out of the ancient past. A murder has been committed in the desert, and the Quenanites plan on delivering some Old Testament justice. Queen is just the detective they've been waiting for.

Cosa pensano gli ascoltatori di And on the Eighth Day

A New Twist on the Classic Locked Room Mystery

Instead of a locked room mystery, this is an isolated town mystery. All the characters are there, and some very interesting zealots at that; all the clues are in plain sight. Even when you have it all figured out, the story keeps you reading.