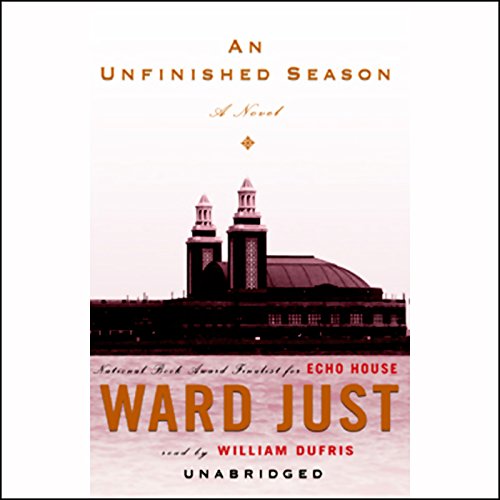 From a distinguished chronicler of American social history and political culture, An Unfinished Season captures the postwar moment of the 1950s when the modern world lay just over the horizon. In a time of rabid anticommunism, worker unrest, and government corruption, even the small-town family could not escape the nationwide suspicion and dread of "the enemy within".

In rural Quarterday, on the margins of Chicago's North Shore, 19-year-old Wilson Ravan watches as his father's life unravels. Teddy Ravan, gruff, unapproachable, and secure in his knowledge of the world, is confronting a strike and even death threats from union members who work at his printing business. Wilson, in the summer before college, finds himself straddling three worlds when he takes a job at a newspaper: the newsroom where working-class reporters find class struggle at the heart of every issue; the glittering North Shore debutante parties where he spends his nights; and the growing cold war between his parents at home. These worlds collide when he falls in love with the willful daughter of a renowned psychiatrist with a frightful past in World War II. Tragedy strikes her family, and the revelation of secrets calls into question everything Wilson once believed.

"Crisp and intelligent, animated by dry humor and by a realism that is too humane to be cynical. This novel, with its resonant questions about the class divisions that most Americans refuse to acknowledge, is one of [Just's] most trenchant works to date." (Publishers Weekly)
"Emotionally freighted, witty and sophisticated, and powerfully evocative of both the time (the early 1950s) and the place (Chicago) in which it is set....A beautiful, wise book." (The Washington Post's Book World)
"Just masterfully evokes the bittersweet beauty of city and suburb, the immensity of solitude, the fortitude life requires, and death's ever-present shadow." (Booklist)

This novel's virtues are not easy to describe. Beautifully written, it revolves principally around the events in the life of a 19 year old boy coming of age one summer in the early 1950's in the exurbs of Chicago. As if told many years later, his memories of this period focus on the people around him: his changing parents, his peers leaving high school to the world beyond, the journalists at his summer job, the jazz musicians he becomes acquainted with, the girl he falls in love with briefly, and the mysterious events surrounding a tragedy in her family. This story builds slowly, although it is never lacking in interest. (Life is full of events with no huge import.) When circumstances change and when tragedy strikes, the loss is quite palpable, without being the least bit maudlin. The narration was excellent.

I read the book in 2004 and was taken by the story and the characters and and the writing of Ward Just, the narrator was perfect for this story , I knew people like the ones in the story and became part of their lives without being one of them, I don't think we ever forget our first love that we through would last forever, the story is about life, parents and children and how they affect each other emotionally and the results of that interaction as life continues

Why does a male narrator have to do female lines in falsetto? He keeps altering his voice according to who is speaking, and he doesn't pull it off. Just read everything in your natural voice, please.

Really disliked this book and strongly advise you to listen to the sample before purchasing.

I wanted a book based in chicago as I was heading there on a trip and wanted to get some historical background and a sense of the place. This book is based in the Chicago area and that's about the only good thing about it. It feels like a very poor mans attempted copy of Catcher in the Rye, though here there is very little to redeem the main character or any of his actions. The other characters are unbelievable and frankly irritating. The story is thin and actually dull.

It may be an accent issue, not one I usually have, but I really disliked the narrators voice and pronunciation of many words. Unfortunately the book appeared to have a small vocabulary meaning these badly pronounced words seemed to be repeated endlessly.

I battled to the end hoping it would improve, it really does not, at all.

Please try before you buy.