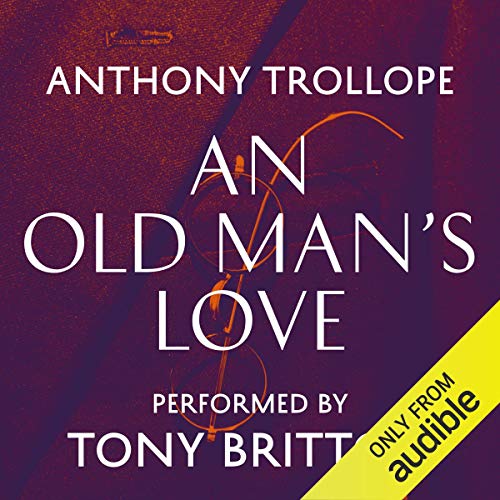 William Whittlestaff, an aging bachelor, becomes a guardian to the much younger Mary Lawrie, the orphaned and penniless daughter of an old friend. Having lost the woman he loved to a richer rival many years ago, he now finds himself falling in love with Mary with intentions to marry her despite knowing that her love belongs to another man, John Gordon. John left three years previously in search of his fortune in order to make himself worthy of Mary. Not knowing if she will ever see him again, Mary accepts Whittlestaff's proposal only for her true love to return having made his fortune in the Kimberley diamond fields of South Africa. Though he knows Mary's true feelings, Whittlestaff is unwilling to be rejected once again and will not let Mary go back on her promise. John does not want to give up hope either. Who will win Mary's hand in marriage?

An Old Man's Love is the last completed work by Anthony Trollope, published posthumously in 1884. Trollope was one of the most successful and respected English novelists of the Victorian era with more than 40 published novels that are regarded by some as among the greatest of 19th-century fiction. Many of his works covered political, social and gender issues. Fans of his work have included former British Prime Ministers Harold Macmillan and Sir John Major.

If you like the stately pace of Victorian fiction, you'll love this marvelous less well-known Trollope novel. The reader of this work does a spectacular job--the accents, the peculiar character's voices and idiosyncracies, and very credible female voices all make this a delight to listen to. Also, the book is not overly long and is broken up into manageable chapter lengths. I can't recommend this book highly enough. Enjoy!

A Pleasure to Hear

I've never felt compelled to comment on the quality of a narration before but this was by far the best narrator I have ever heard, his characterizations were distinct, original and many times hilarious. I wish the powers that be would let him record the entire Pallisers series.

Best storytelling by a narrator I’ve heard. Loved it!

The story and the delightfully portrayed characters will remind you of the movie Sense and Sensibility. Status-seeking Vicar, foolish, bossy housekeeper, star-crossed lovers, wealthy landed gentlemen. All portrayed so well I had to keep laughing. Narrator was excellent at making each character fun to listen to. An excellent actor. Best I’ve ever heard on an audio book.

Having just finished Can You Forgive Her? (by the way, I did) I wasn’t surprised to find William Wittlestaff, Marie Lawrie and John Gordon facing another excruciating choice.

For Trollope, holder of the European record for Most Three-Volume Novels Written During the Reign of Queen Victoria, this last effort is an uncharacteristically brief excursion. But all the satisfactions of Trollope are here: complex, unpredictable characters, a style that swings effortlessly from the humorous to the serious, the whole pervaded by the author’s genial omnipresence.

This was my first meeting with Tony Britton as a narrator, and I very much hope to meet him again.

Interesting, and made me curious about context.

This is a simple single-situation story, which I found rather refreshing: no unnecessary characters, lengthy backgrounds, etc. The story examines the complexities of life-changing decisions and the influence of superfluous factors, which might make or break a person's life. I greatly appreciated the close examination and the fact that the concerns the main characters felt were valid, even if dismissable, especially by modern standards.

This book also made me curious about the way this book would have been perceived by its contemporaries - Would the characters be recognizable as commonplace? Would the attitudes seem exaggerated? Would the story itself seem plausible or idealistic/unrealistic?

The narration is excellent, but this novel contains brief racism and only one major plot line, making it not my favorite of Trollope’s works. While, like most of his novels, the characters have more honor and nobility than the people I know in my life (making it, as always with him, a means to regain my faith in humanity) it’s not his best work, and the casual references to the diamond trade remind me of the distance between the world he creates and the one we live in. I’d recommend it only for those who want to exhaust all his works. For those who want to try one or two, try nearly any other, or you won’t have given Trollope a fair reading.

Not the best of Trollope

I love Antony Trollope. Sadly, this book is not among his best. If like me, you are trying to read all his books, go ahead and try it. Otherwise, skip this one. If you want to read a short Trollope book try Dr. Wortle's School or better yet try Barchester Towers.If this is your first encounter with Trollope, give him another chance. Don't let this book discourage you from reading his other works.
The narration is acceptable, I feel that Tony Britton could have done a better job with the female voices.

I was heartbroken half way through and to the end

This is the worst, so called love story, I've ever read!! Don't expect to feel good at all during this read. I listen to the end hoping it would turn around but it never did.

There were times when I wondered if I was listening to the same chapter over again. The characters kept expressing the same thoughts again and again. I found the whole story a bit of a letdown.

As a black woman I was shocked and disappointed that this book uses the n-word in a very casual, matter-of-fact manner. Completely unacceptable.

A marriage and money pot-boiler

Trollope wrote about 50 novels and I’ve read over 30 of them, and enjoyed most, but judge An Old Man’s Love his weakest by far. The story merits a very short story but is padded out to book-length by inconsequential verbiage: admittedly nicely written but it became repetitive and annoying and was not helped by the inclusion of a housekeeper and a clergyman who are irritating caricatures. Trollope, like Dickens, wrote his novels in instalments that had to fill x-number of pages and I think he must have been short of ideas when he was commissioned to write this book. In a nutshell the story is about an insipid young woman who is sought in marriage by a young, former swain previously rejected owing to his lack of funds and older man of property. The latter is labelled “old” and “elderly” but is actually only 50 years old. The book goes back and forth as to which one she should marry, interminably!
No author could write so many books and maintain the very high standard of his Barchester and Palliser series so should be forgiven for one or two duds. So if you're new to this author don’t judge him by this book.

Tony Britton does a grand job as narrator.

This is a very short novel compared with most of Trollope's works but it is none the less enjoyable. The characters are convincingly drawn and with much sensitivity, and the writing displays all the psychological penetration which readers of Trollope are familiar with.
I would particularly like to mention the narration by Tony Britton. This was masterly, particularly in the manner in which he brought the comic elements of certain characters to life, notably the curate and the housekeeper.

Trollope is one of my all-time favorite writers, so it's hard to give one of his books a thumbs-down review.
An Old Man's Love is Trollope's last novel, published posthumously. It has a thin plot, little action, and a very limited cast of characters. The interest in the novel comes from the internal struggle of the Old Man of the title, William Whittlestaff who at the ripe old age of fifty (!) is the old man of the title and it is he who proposes to Mary. She was previously in love with John a penniless man. Miraculously on the very afternoon after Mary agrees to marry Whittlestaff, John Gordon returns to claim her, having made his fortune in the diamond mines.
The bulk of the book is Whittlestaff's internal conflict on what he should do.
There is also a side story of an interfering, and garrulous housekeeper who is troubled by a drunken husband. Both these characters are extremely annoying and I wish they and their predictable mundane and unsavory lives had not appeared at all. The book is void of Trollope's usually wonderful writing, sly, dry wit or political, social or business intrigues. The book meanders along as if being paid by the word. But as the situation drags on and on, it loses any drama it had and after a while, I was just begging Trollope to get on with it.
It is far from Trollope's strongest work, and would not be a good starting point. It is probably best read only by those who have already basked in his stronger works, particularly his Barchester and Palliser novels.

Exactly what I would expect from Anthony Trollope and extremely well read by Tony Britton. 5 stars all round.

Trollope’s insight into the female psyche in his time has learning for the present - and Tony Britton’s narration is truly excellent.

I am a lover of the classics. I read Austen regularly, and the Bronte sisters, but have only in recent years come to read Trollope. I rate him almost, if not as, highly as Austen. I have worked through all of the Barchester Chronicles and enjoyed them. I was of the opinion that no one narrates Trollope quite like Timothy West. However, I really loved Tony Britten narrating this one. It says performed by him—and that it was! He managed to get in character male or female, and switched seamlessly between them. Usually I prefer to read and imagine the characters for myself but I’m not sure that I would have managed that half as well as how they were portrayed by Tony Britten.
This Audible book had been in my wish list for a while. It was only for the fact that it was not Timothy West as the narrator did I hold back from getting it. When it was offered on the Audible Plus catalogue for members I wasted no time in adding it to my library. Well done Audible for making such titles available.

I love Anthony Trollope but I struggled with this story. I found the characters unlikeable & annoying. I think perhaps the attitude to women is just a bit too unacceptable to modern ears & I did not want to know how it finished.

A different take on the old opera favourite of the old man guarding his ward from the young lover so he can marry her himself. And a new situation to place one of Trollope's impossibly perfect young women.

The story is slight by ATs standards but enjoyable. outstanding narration enhanced the story. very much of its time!

Not the best Trollope novel.

I have been working my way through Anthony Trollope's novels and have enjoyed them. However, this story is rather repetitive as far as the thoughts etc., of the characters go. Worth a listen to though.