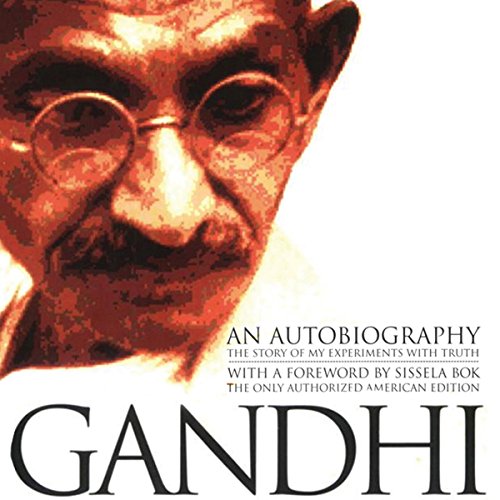 “When I despair, I remember that all through history the way of truth and love has always won. There have been tyrants and murderers and for a time they seem invincible, but in the end, they always fall — think of it, always."
--Gandhi

In 1999, this book was designated as one of the "100 Most Important Spiritual Books of the Twentieth Century" by HarperCollins Publishers.

A holy man to Hindus, a hero to Muslims, and a criminal to the British, Mohandas K. Gandhi was an inspiring figure of the 20th century, a man whose quest to live in accord with God’s highest truth led him to initiate massive campaigns against racism, violence, and colonialism.

From his youthful rebellion against vegetarianism, to his successful law practice in South Africa, his struggle with his own sexual excesses, and his leadership of the movement to free India from British rule, Gandhi describes the story of his life as a series of spiritual “experiments” and explains how he developed his concept of active nonviolent resistance, which propelled the Indian struggle for independence and inspired countless other nonviolent struggles.

It would be hard to exaggerate how disappointed I am in this audio. Bill Wallace's voice, diction, and pacing - while probably excellent for many other narrations - take my mind so far away from Gandhi's words that I feel like I'm listening to the reading of a cookbook. I've tried to make myself relax and listen "past" his voice. I've been so eager to enjoy it: I thought I'd be able to get used to the narration. However, it's so disconnected from the subject of the reading that I can't get past it.

I'm glad others have been able to enjoy what I'm sure is an amazing book. My best advice is to make sure you listen to the sample. I obviously got so excited about the book that I forgot to sample it, and thus I set myself up for disappointment.

Maybe I was hoping to hear Ben Kingsley. :)

Insightful and Informative without being boring

From Gandhi's lips to my ears! Gandhi wrote this account in a manner that revealed some of his short comings and most of his accomplishments. I enjoyed the book but was at times a little lost regarding some of the events because Gandhi recounted them as if the reader were already familiar with them. He has always been one of my heros but here he reveals aspects of himself that were disappointing to me. In the final analysis he, like all heros, had his flaws and short comings as any human being does. He manages to show himself as conflicted at times, yet able to prevail in spite of that. Sometimes he shows himself to be stubborn and arrogant, yet at other times flexible and tollerant - If you have always admired Gandhi, be prepared to see him in the raw at times. Having said that, there were times when I had the feeling he was glossing over or slanting things in his favor. He was far more complex a person than I had imagined and this book shows it. Well worth the listen and a good historical account of the times.

The book itself is awesome, needless to say, just like the man who wrote it. Narration is good enough. Bill Wallace tried hard to imitate Gandhi's voice and I would say succeeded for most part. However, the narration clearly fell short of the mark when pronouncing the names of Indian leaders or villages. Considering that this book is a real treasure to own, I would have loved to see this book narrated by someone who can bring more nativity to the listener. John Lee from 'The White Tiger' would have been a perfect fit.

Story of the most historical figure

M.K Gandhi revolutionized the Indian independence struggle, but this book is more about what made his principles and personal beliefs. Most of the book is about his struggles as a kid and his profession as a lawyer. The three quarter of the book is about his journey back and forth to South Africa and his struggle to get rights and fight against inequality for Indians in South Africa. Indian independence is just the last 5 hours or so of the book. The most striking thing which I ever knew about Gandhi was his personal life and his diet which is very well described in the book.

Finally a word for the narrator. I wish the narrator had a better control over the hindi names and words. He would pronounce certain words and I would think for few minutes until I made the link with what actually he meant. He would pronounce 'mussalman' (people who follow Islam) as musclemen, which would sound ridiculous in the context.

Overall a must read for anyone who is interested in world politics and history. A great political and historical figure who has inspired many freedom fighters and an epitome of humility.

The Narrator kills this wonderful book!

I am East Indian and have read this book before, I wanted to reread this book for a long time but simple did not have the time. With my long daily commute this audiobook was the perfect solution, but I was not prepared the terrible job Bill Wallace does with all the Hindi and Sanskrit words. He could not even correctly pronoun city names or basic geography without me cringing, this take away from the life lessons which are shared by Gandhiji. It shame and sad someone better was not picked to read this book.

Save your money and don't listen to this book, buy the actual book and read it.

The narrator has really sharp "s" sounds that hurt my ears when I listen to this audiobook. Makes for a very distracting and painful experience.

Mr wallace needs practise.
He totally butchered a masterpiece with his complete inability to pronounce the simplest native words, let alone the complicated Sanskrit based words/phrases.
What an utter shame!! Because the content is fantastic and really spoke to me inspite of the narrator.
Highly recommended!!!

The Power of Truth

This was a very enjoyable and “eye opening” book. As a Christian, I was never taught on other religions except Judaism. I believe it is ignorant to disregard other religions. The country of India holds approximately 1 billion people itself.

This book gives you good insight into Hinduism culture, and along the way Gandhi searches to find the truth in other religions, such as Christians, Muslims, and sub groups of those whom practice different customs.

The book teaches that in the end, truth always prevails. No matter what religion you are, God is truth. Lastly, he teaches to remember we are all from the same God. Those who perform evil deeds are still our brothers and sisters, and we should never hold ourselves above anyone else.

I would recommended this book to anyone.

I really enjoyed this book, I have listened to it 2 or 3 times and I only bought it a month or two ago. It's very long so it takes a few days to get through. I will listen again and again to this one!

The determination of one person and sticking to "personal" principles (vows) developed during youthful years.... Found this book motivational! (What can be accomplished in one life time with little concern for personal negative opposition or living comfortably; at times). I recommend this book if you like strong minded persons with many details!

A great story about one mans spiritual journeyand his personal growth as he encounters his Indian roots, colonial racism and subjugation and his own sexuality.Very annoying American accent diminishes a wonderful book.

Ghandi, an example to mankind, with flaws

This long audiobook of the life of Ghandi, read by Bill Wallace, is a riveting account of one man's struggle against colonial rule. The reading is at first a little odd, with Ghandi's voice given an American accent. However, Wallace's interpretation, with very careful enunciation of the more challenging Indian surnames, becomes a very good way to access the great man. I was fascinated by Ghandi's determination to get a British education, after having been married at the age of 13, and had children as a teenager. Having become a British trained barrister, and fended off the attempts to pair him off with English women (he hadn't shared the information that he was already married), leaving his wife and family for several years, he travelled between India and South Africa, sometimes with and sometimes without the family, to champion the lot of the Indians in South Africa, himself suffering from the racism there, before working tirelessly in India to grow the Congress Party and fight (non-violently of course) for Indian independence from British colonial rule. Explanation of the vows of "brahmacharya" (restraint in sexual, dietary and other areas) and the principle of non-cooperation to achieve political ends non-violently is extremely interesting, as is his relationship with his wife, Kasturba, and his children, who were forced to follow his vegetarian practices, even to the point of refusing life-saving medicines, which, in his wife's case, she did professing (according to Ghandi) complete agreement with his principles.

The book is extremely well written and read, and rates as one of the most accessible and interesting accounts of the life of a great human being.

I really wished this had been good

In the past year I have listened to many autobiographies of great leaders and they all reference Gandhi for inspiration.... But sadly this book was long winded and in places very boring. It does give you all the facts and timelines etc but felt like listening to a boring history teacher who didn't give a dam about if the listener was going to enjoy. This is no reflection on the ideals of the main man himself.

A good insight to a great man.

I always wanted to read the Autobiography of this great human being. I am glad that I did, and it was a really good insight into his mind.

Would you listen to another book narrated by Bill Wallace?

Hard going at times but inspiring, well worth perseverance with. This book is well read and easy to listen to.

I read the reviews, should have listened

Would you try another book written by Mohandas (Mahatma) K. Gandhi or narrated by Bill Wallace?

No, The narrator put me off listening to this book with his hideous droney Amercian accent and intonation. Another reader commented on this and I thought 'it can't be that bad'. It was. I gave up in part one. He manages to make what should be an interesting text thoroughly boring. Awful.

Would you be willing to try another one of Bill Wallace’s performances?

I am struggling to read this book. I am an indian and wanted to dig deeper into my roots.. Should I invest more time into this book? I am regretting wasting my credit!

Were no Indian narrators available?

I struggled through hours of this before giving up and removing it from my device. The text is insightful and interesting, and the slow pace at which the narrative unfolds didn't cause any problems. Unfortunately, although I would happily listen to other books narrated by Bill Wallace, he was not at all the right choice for this autobiography. He is American, which makes it hard to hear Ghandi's voice, and in places he even mispronounced words (for which the editor must also bear responsibility). I'm going to buy the print version of this book so I can read further.

Good but oh, the narrator!

was a good "story" but the narration did impact on the experience, I think it would have been beneficial to have a Asian read it because the pronunciations were really hard work.

Reader butchers Indian names but decent overall. need a reader that is less terrible with names