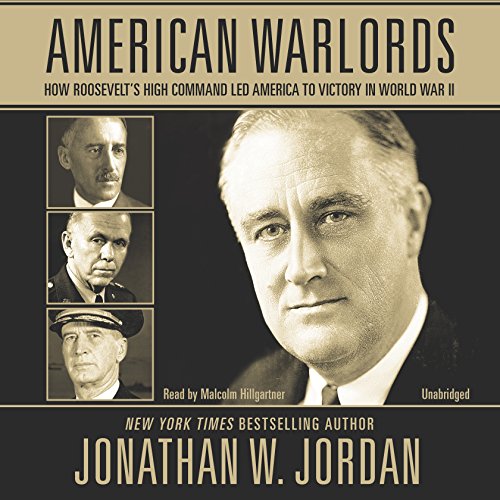 American Warlords is the story of the greatest "team of rivals" since the days of Lincoln.

In a lifetime shaped by politics, President Franklin D. Roosevelt proved himself a master manipulator of Congress, the press, and the public. But when war in Europe and Asia threatened America's shores, FDR found himself in a world turned upside down, where his friends became his foes, his enemies his allies. To help wage democracy's first "total war", he turned to one of history's most remarkable triumvirates.

Henry Stimson, an old-money Republican from Long Island, rallied to FDR's banner to lead the Army as Secretary of War and championed innovative weapons that helped shape our world today. General George C. Marshall argued with Roosevelt over grand strategy, but he built the world's greatest war machine and willingly sacrificed his dream of leading the invasion of Europe that made his protégé, Dwight Eisenhower, a legend. Admiral Ernest J. King, a hard-drinking, irascible fighter who "destroyed" Pearl Harbor in a prewar naval exercise, understood how to fight Japan, but he also battled the army, the air force, Douglas MacArthur, and his British allies as they moved armies and fleets across the globe.

These commanders threw off sparks whenever they clashed: generals against politicians, army versus navy. But those sparks lit the fire of victory. During four years of bitter warfare, FDR's lieutenants learned to set aside deep personal, political, and professional differences and pull a nation through the 20th century's darkest days.

Encircling Roosevelt's warlords - and sometimes bitterly at odds with them - was a colorful cast of the Second World War's giants: Winston Churchill, MacArthur, Josef Stalin, Eisenhower, Eleanor Roosevelt, and Charles de Gaulle. These and other larger-than-life figures enrich a sweeping story of an era brimming with steel, fire, and blood.

Another Outstanding Book by this Author

Loved the information and pace of the book and its terrific narrator. It provided great personal insights into these men who were absolutely perfect for the roles Fate assigned them. I became very interested in learning more about George Marshall, a man sadly forgotten about over time.

I do not hand out 5 stars to every book. In order for a book to be a 5 star you must be
teleported to where the story is being told and you become engrossed in what is happening
around you. You must live the story rather then just witness it. This is why Ameridan
Warlords gets 5 stars from me.

This book is the telling of WW2 from the perspective of the major policy players. Roosevelt Marshal, King, Stimson, Ickies and others. As Hitler takes power in 1933, Roosevelt knows
that a distant storm is coming Wrapped in the throws of the depression, Roosevelt has the vision to jump start the American manufacturing war machine to keep Great Briton afloat.

This book is a must read for the WW2 history buff. Where the book loses one star in performance is the mispronunciation of key names and cities. Missing from this book is any discussion of Harry Hopkins, one of Roosevelt's closest advisers I wonder at this omission

As a 75 year old with an intense interest in WWII, this book was s terrific rendering of how our nations leaders formulated and executed our countries war strategy. It clearly laid out the roles of political and military leaders in place for 5 long years. It's a not to miss audio book.

Combination of great writing and a great performance made this difficult to put down and by the time I'd finished 20 hours I still wanted more. Fascinating insights from a perspective I've read little about, this book certainly brings the characters to life. Will definitely buy more from this author & performer.

Overall this is an entertaining narrative of the American military high command in World War II. Easy to listen to and captivating.

While I greatly enjoyed the perspective of the author and his clear writing, the sound quality was poor in many places.

I have read bios of all the main characters in this book but to have them all interacting was really very interesting. I was pleased also that the author was often critical of FDR, a welcome change from the usual slavish adulation put upon this mere mortal. Anyway, for historian or dabbler this book is an absolute must.

It puts all the major players together and how they reacted with each other. Puts in more perspective than any one biography.

This book enthralled me for several weeks. It certainly was not short, but every chapter was a gem. Jonathan W. Jordan's skill with the English language was forever present, and his constant use of naval terms was entirely enjoyable. I have, I guess, a better than average knowledge of WWII for someone of my age, a baby boomer born just a few scant years after the end of the war, and I have read and watched footage of many battles. But everything I had every read or viewed in the past always centered on the battles, and on the military planning for the battles. Jordan's book takes us into the politics and the personalities of the men at the top, and he provides so much wonderful minutia, so many well-woven factoids, so many issues of trivia, that the book comes alive as if the reader (or in my case, the listener) were on scene as a fly on the wall. This is really a terrific book, and vastly enlarged my knowledge of what was going on behind the scenes during WWII. I had not known that much about Ernie King, and always thought of Chester Nimitz as the great admiral of the war. I did not realize that Churchill so staunchly, and for so long, opposed the Normandy invasion, trying desperately and continuously to steer the US to operations in Italy and the Balkans. Certainly I had always known of Eisenhower's success on D-Day, but I did not know that his assignment was almost a last-minute decision. Finally, the pivotal and essential role of Marshall really comes through. The amount of research Jordan must have done to write this book is astounding, and the source material he cites is highly impressive, not only that he viewed these materials, but that he found them. In sum, the book is so beautifully written, so filled with facts, but presented so masterfully, that I found myself suspending my own knowledge and waiting to see how it all worked out. As they say in some book reviews, "A tour de force!"

This was an amazing book. It was very detailed and kept me fully engaged in listening. I would recommend this book to anyone interested in this subject matter.