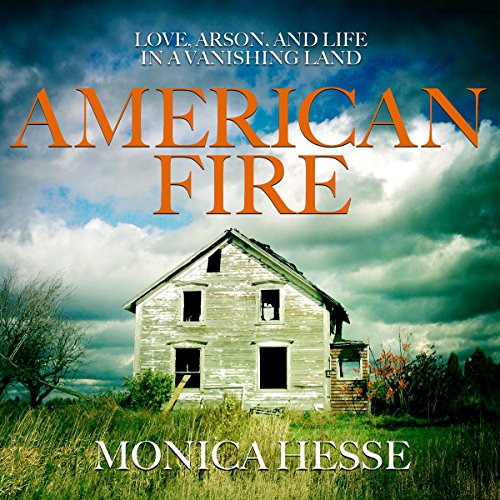 Shocked by a five-month arson spree that left rural Virginia reeling, Washington Post reporter Monica Hesse drove down to Accomack County to cover the trial of Charlie Smith, who pled guilty to 67 counts of arson. But Charlie wasn't lighting fires alone: he had an accomplice - his girlfriend, Tonya Bundick. Through her depiction of the dangerous shift that happened in their passionate relationship, Hesse brilliantly brings to life the once-thriving coastal community and its distressed inhabitants, who had already been decimated by a punishing economy before they were terrified by a string of fires they could not explain.

Incorporating this drama into the long-overlooked history of arson in the United States, American Fire re-creates the anguished nights that this quiet county spent lit up in flames, mesmerizingly evoking a microcosm of rural America - a land half gutted before the fires even began.

Interesting read , hard to believe its true . Not for those looking for beautiful prose or to get swept away to another land by a narrative this is not your book. Nevertheless the Author does a good job to give adequate background and provide enough background about the characters thst you feel like you know them.

Truth is always stranger than fiction

If you didn't know this was a true story, you'd think it was a very unlikely piece of fiction. Very interesting tale presented in an interesting way.

I really liked the arc of the story- alternating between past and present until the two stories collide. The narrator speaks in a very choppy intonation that makes it hard to listen to, but worth the story if you can get passed the first few chapters and get used to it!

As an Eastern Shore person, I was keen to

read this story as it unfolded in my neighborhood.

The story is good and well researched and well-written. My only negatives were several misspelled place names and the butchering of place names the reader managed.

Vanilla telling of what most people know already

This book was simplistic. Maybe that is it's meaning. It was predictable and bland. The reading was close to awful. Not worth your time.

This sounded as if it was read by a robot. She. Pronounced. Every. Word. With. No. Emotion. Siri would have done a better job.

If you want to hear Siri read you a book, then this is the book for you! The story is good but the narration is hard to overcome.

The narrator was good atleast?

Yes it was a true story, but the whole thing was kind of flat. no real meaning behind her actions, his yes but hers no. The only reason I got this book was because it was a book club pick.
I am going to ask for a refund, I would never listen to it twice.

Missing the feel of the area.

I was looking forward to this book as I have family in the area. I feel like the author could have pulled back a bit and developed the small town feel. Lots of people mentioned, but not depth. It was written as part story, part true crime, and part documentary, but no very cohesive. Some well phrased statements though.