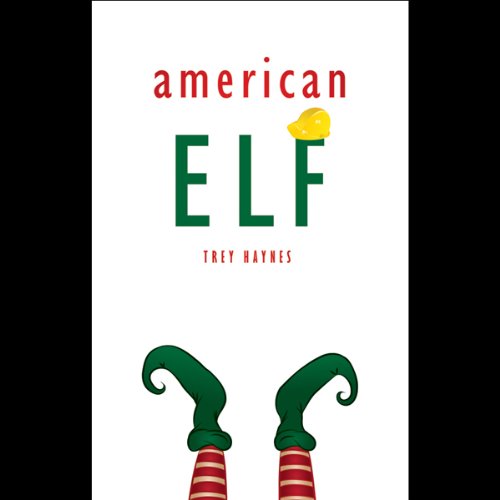 While Christmas may seem to operate like a well-oiled machine, things are not always so jolly at the North Pole. Only five days before Christmas, Santa's elves, encouraged by an unscrupulous union elf, go on strike, pretending to be sick to hold out for better wages. In a panic, Santa sends for eight replacement toymakers. But when Otto, his trusted assistant, decides to stop in Detroit's shady, industrial section for a beer, he meets a group of American factory workers and decides to take them back instead.

American Elf takes listeners on a hilarious and surprising journey following these men as they work to deliver Christmas despite their lack of experience and the elves' attempts at sabotage. Will the factory workers botch the job? Is Christmas doomed? Listeners will find out all this and more in this unconventional Christmas tale.

Reader who can understand punctuation and pronunciation. He missed easy words and broke sentences randomly before the period. His enthusiasm was low. Maybe he just needed more practice.

The story needed more time to develop deeper, more individualized characters. A few were memorable, but really it was too simple to be very deep.

Who would you have cast as narrator instead of Dylan Raines?

Almost any other narrator would be better.

I loved the concept that inspired this book. Not only was it humorous--elves going on strike and laid off workers getting a second chance--but it also had the possibility of a meaningful message for the holidays. It just unfortunately didn't get all the way there.

Imagine this story for yourself

"His short legs dingle from the couch."

UGH! I am such an idiot!

I wanted Christmas-related fiction to listen to -- to get me more in the mood for the upcoming season. So, this past weekend I went through the 27 pages of audiobooks at the Audible site.

I had a bunch of them open up in new tabs and then went through them reading the more expanded descriptions, the reader comments and the star ratings (if available). What I didn't do was listen to the samples.

And I GOOFED Big Time on this one.

I would almost rather be sitting in a 1st- or 2nd-grade reading circle, listening to children mangle their way through the old Dick and Jane books, rather than listen to this reader. He's ... AWFUL is not harsh enough.

I am 9 minutes and 9 seconds into the book and already regretting wasting my money on this book. However, it is short (2 hours, 46 minutes and 23 seconds) and I was really intrigued by the concept.

It is probably mediocre writing. So far, at the 9:09 minute point, it doesn't seem to be well written at all. But being short, and having an intriguing idea behind it, can make up for less than spectacular writing.
Now that I have finally listened to the entire book, I will describe the writing as less than mediocre. It is, instead, a fairly decent First Draft. But nothing better than that.

I visited Tate Publishing's website and at first thought they were a "self-publishing" company. Going back to their site, I discovered they are not a vanity press. They actually have a manuscript acceptance policy and procedure. YIKES! This book, if written as it has been recorded, should never have been sent into production without major makeovers.

The idea IS intriguing. Santa's unionized elves, being led by a trouble-maker in their midst, all come down with Blue Flu just 4 days before Christmas. An elf sent to pick up a few replacement elves gets detoured, ends up in Detroit, and decides to bring a group of factory workers back with him. Can these employees of a rundown factory do the job in time for Santa?
There are a few good ideas in the book and half-thought-out ideas of what it is like at the North Pole.
But ... well, read the publisher's summary, and IMAGINE the story for yourself long before you spend money or time on this book.

If you are a masochist, and are willing to take a chance on this book, here are a few of the horrors awaiting you:

0:09:09 Truff -- do you suppose the author wrote "trough" since it is in reference to that thing animal feed is put into?
0:21:04 Strutgard is probably in reference to the city in Germany known as Stuttgard
0:26:44 a character had "perched" lips, but I think "parched" was meant
0:54:12 a "sellboat" is mentioned
0:54:16 and someone is called a pootz, and I've always heard it pronounced as it is written, "putz"
1:18:34 small "fries" spring up where a character is using a cigarette lighter to burn Santa's naughty/nice list. Do you suppose it was small fish springing up, or were they small fires?
1:36:37 an elf's legs "dingle" over the edge of the couch
1:37:34 and a cigarette "dingles" from another's fingers
and
2:26:28 hair "fires" out in every direction. Hmm ... I'd like to see someone fire out their hair like a porcupine firing its quills.

These are weird words. I've made no note of the appalling reading. It just can't be described. It "has" to be heard to be believed. But don't bother spending money or a credit to hear it.

While the writing is bad, the story concept is intriguing and has lots of potential. So I gave that 3 stars. I would have loved to be able to give it a higher score, even with bad writing. But there are few spots in the story where either paragraphs were left out of the reading or were never put into the book -- making following the action a bit difficult; particularly in the bowling alley where Otto, Roy and the factory workers all meet.

I know I am a picky reader/listener -- pickier than most people, I imagine. But this time, I would be surprised if anyone could give this book higher ratings and be able to defend their reasons.


(I worked on this review while taking breaks from listening to this book ... therefore references to being at the 9 minute point of the book, as well as referring to my opinion once I finally finished the book ... I kept going back to the book, to listen to more, because I kept HOPING the story concept itself would make up for all the problems the book has. Sorry, Trey (author), Dylan (reader/narrator) and Tate Publishing -- it never redeemed itself.)