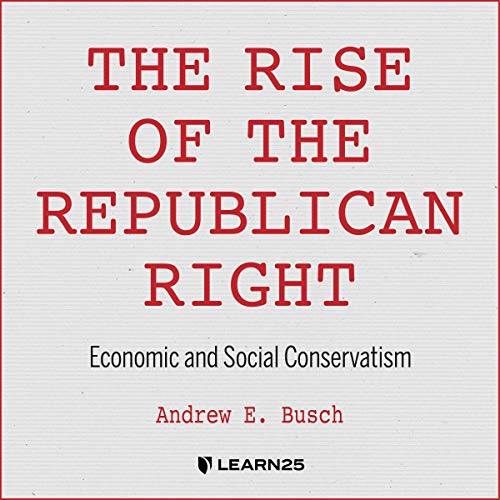 If you wish to understand the intellectual history and trajectory of American conservatism, you are sure to enjoy this brilliant course by one of America’s leading conservative scholars.

Since the 1950s, economic conservatives have been in political alliance with social conservatives or traditionalists. That coalition has been a source of both strength and tension. Under the guidance of award-winning Professor Andrew E. Busch, you will first examine the distinctive features of economic and social conservatism before exploring the fascinating relationship between the two.

This course starts with the historical background of economic conservatism ("classical liberalism"). Economic collapse in the 1930s and the rise of the New Deal form the backdrop, and the thinking of figures such as Friedrich Hayek and Milton Friedman establish the intellectual foundation. You will see how the economic crisis of the 1970s breathed new life into free-market economics, how that revival took new forms, and how it was translated into policy in the 1980s and beyond.

Next, you will consider the rise of Russell Kirk's "traditionalism" in the 1950s and the mass-based social conservative movement of the late 1970s. You will then consider the ways economic and social conservatism both reinforce and work against each other. How have they worked together electorally and in concrete policy struggles, and when have they worked at cross-purposes?

After this thoughtful examination, you will conclude with a consideration of the future of the economic conservative - social conservative coalition.

This course is part of the Learn25 collection and comes with a free PDF study guide.