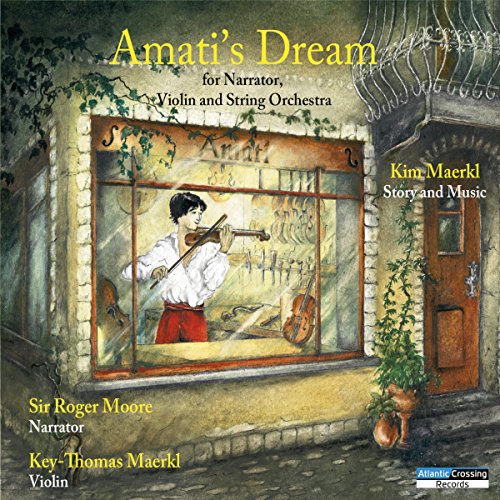 Amati's Dream is the compelling story of the great violin maker Nicolo Amati and his apprentice, Raphael. It is the year 1666 in Cremona, Italy. While Raphael is learning the luthier's trade, he secretly yearns to be a performer. His family cannot afford an instrument or music lessons, so Raphael tries his best to be content with working in the violin shop. But his heart cannot let go of his dream. The narration of legendary actor Sir Roger Moore brings Amati's Dream vividly to life. The original music features Key-Thomas Maerkl, in a lyrical performance on a violin made by Amati's most famous pupil, Antonio Stradivari. Let the story and music take you on a magical journey into the past.

Narrator biography: Sir Roger Moore is a British actor born on October 14, 1927 in London, England. He is best known for playing the secret agent James Bond. He was knighted in 2003, and was named a commander in France's National Order of Arts and Letters in 2008. He is also a Goodwill Ambassador for the charity organization UNICEF.