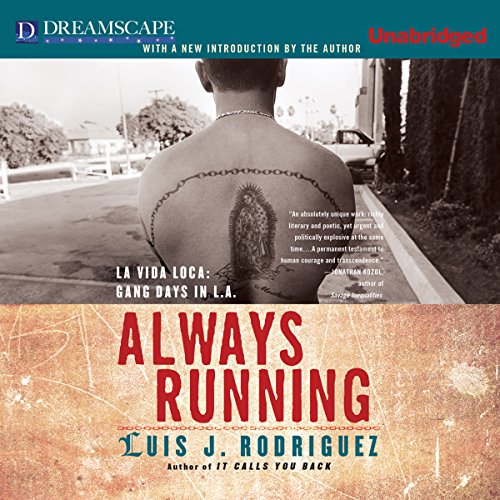 By age 12, Luis Rodriguez was a veteran of East L.A. gang warfare. Lured by a seemingly invincible gang culture, he witnessed countless shootings, beatings, and arrests, then watched with increasing fear as that culture claimed friends and family members. Before long, Rodriguez saw a way out of the barrio through education and successfully broke free from years of violence and desperation. Achieving success as an award-winning poet, he was sure the streets would haunt him no more - until his son joined a gang. Rodriguez fought for his child by telling his own story in this vivid memoir. At times heartbreakingly sad and brutal, Always Running is ultimately an uplifting true story, filled with hope, insight, and a hard-learned lesson for the next generation.

This is an important book for many reasons. The narration, by the author, is remarkable and brilliant.

Book for all educators

This is a book that should be read by all who educate children/teenagers. We need to make sure we are still Honoring our Latino students heritage and are aware of their cultural background and struggles.

Such an awesome book

my son who is in h.s. had to read this for his class, the book look interesting so I purchased the audio version. listen intently & finish in about 2 days, my son was astonished. It's been great discussing the book with him. Love Luis poetic descriptions & the book.

Decent book. Jumps from one subject to another.

The story can be strong. There's a lot of downtime in the narrative. Not a lot of violence but more focused on the authors youth at school and jumping from a gang to another.

The book does have its moments. Memorable scenes of stabbing, forced into committing assaults, but these are anomolies in a narration mostly focused on everyday mundane details about attending school and the obstacles all Latinos face in schools that don't share the same interest.

This book is a great book to read!

This. book has anything you'll ask for. Great for passing time and just a great book overall.

I lasted until the last hour of this horror waiting for luis to show some awareness of how he and his homies, not the police, not teachers etc ere the problem. His pressuring one of the three girls he was having sex with to abort his baby was last straw. This book was hours and hours of self serving narrative about how this guy and his homies basically turned their community into a wasteland and how they not " the man" were what kept them marginalised. And yet the author has the ludicrous comment that it was the police who caused trouble between the gangs. Every ready to take a grant, a scholarship, a handout, these folks nevertheless resent and attack and even, in many cases at random. No acceptance of responsibility, no shame. The reader cannot pronounce the word " ask". Don't waste your tine. This ain't the Mexican " to kill a mockingbird". This is a litany of gratuitous violence sex abortion and drugs. The self righteous intro pretends that people banned this book because they are uptight. Maybe they did so because it is smug hypocrisy where women are merely cyphers and objects. Nope .

Too close to home

The first 30 minutes are just the author gloating about his "accomplishments". This book was more about adolescence and less about crime. I'm not saying that no one would enjoy this book, but there's are plenty of interesting stories from the barrios of la and this, to me, wasn't one of them. If you want to listen to a grown man make himself sound like a teenage revolutionary/civil right leader, this book is for you. If you want to read about a Hispanic gang members time on the street, and inside various prisons, buy "The Black Hand" by Rene Enriquez.

I GREW UP IN EAST LOS IN MONTEBELLO IN PRIMERA FLATTS BARRIO. MY LIFE WAS EXACTLY LIKE THIS. IF YOU DIDN'T LIKE THIS BOOK THEN YOUR A SQUARE AND DO NOT DESERVE TO READ THIS BOOK GO READ 20 LEAGUES UNDER THE SEA OR OLD YELLER. Hahaha!