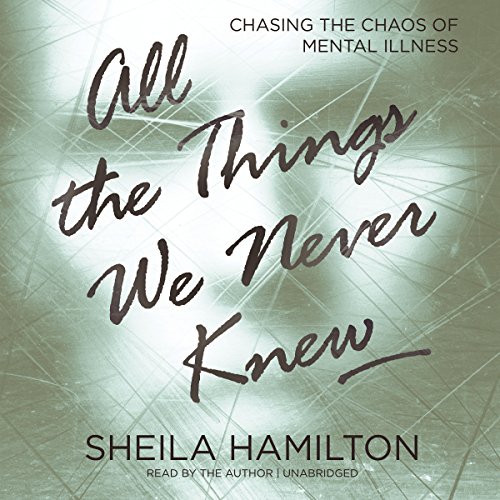 Even as a reporter, Sheila Hamilton missed the signs as her husband David's mental illness unfolded before her. By the time she had pieced together the puzzle, it was too late. Her once brilliant, intense, and hilarious partner was dead within six weeks of a formal diagnosis of bipolar disorder, leaving his nine-year-old daughter and wife without so much as a note to explain his actions, a plan to help them recover from their profound grief, or a solution for the hundreds of thousands of dollars in debt that they would inherit from him.

All the Things We Never Knew takes listeners from David and Sheila's romance through the last three months of their life together and into the year after his death. It details their unsettling descent from ordinary life into the world of mental illness and examines the fragile line between reality and madness. Now, a decade after David's death, Sheila and her daughter, Sophie, have learned the power of choosing life over retreat, let themselves love and trust again, and understand the importance of forgiveness. Their story will resonate with all those who have loved someone suffering from bipolar disease and mental illness.

Author is an unsympathetic martyr.

Although I kept hoping it would improve, I found this book insulting. It is a story of avoidance, not survival or struggle. The author not only refers to her bipolar husband as a "monster", she also spends much of the book covering frivolous details, such as how famous her employer is, and what awards they have won. Followed by a hastily mention that her husband had been hospitalized for the first time. The second half of the book is spent discussing how dreamy her replacement husband is. I will be requesting a refund for sure. Too bad I can't get my time back.

I think the willingness of people to speak openly and honestly about mental illness does a lot to help reduce its stigma and aid understanding. Ms. Hamilton has provided a great service with her very personal, and wonderfully written, account of what it was like loving someone who was bipolar. The story is not pretty. The reality of this disease is not pretty. Which is why it is not talked about. But with more open dialogue, like this book provides, we can increase the chances of healing for people who are bipolar, and for the people that love them.

Totally worth it. Awesome

Probably one of the best books written on the subject of BD, just as enjoyable as Dr Jamison’s books as well. Worth the money for sure.

I loved every chapter of this true life story. The author/narrator is equally good at writing and reading a compelling and sometimes very emotional account of her life with a husband that has bipolar disorder. I especially liked the short chapters that explore the definitions of various types of mental illness and treatments. A very important and pertinent read for everyone in our society.

Beautifully written-This book is the real deal. A deep emotional depiction of how to cope with mental illness when it shows itself in a loved one. The thing that made this book resonate for me was the authors ability to express her feelings about everyone involved. This is an informative book for sure, but for me it is the ultimate love story. Love from every angle. I adored this read.

With a different narrator, this would have been a much better story as the narration was very reporter-like-except for the emotion I heard during the telling of one very sad event.
This is a telling of what really happens in the lives of partners and families with mentally ill loved-ones. It's raw, it's truthful, it's transparent, and very painful but educational and necessary to know these things. Nothing fluffed up about it.
This is a great learning tool for those who have a partner who is unreachable. To know that life can go on after the fact. Not without much inner work, but nevertheless, it CAN happen.
I felt so many feels during this book. Probably more than I knew I had in me.

An Intimate Look at Mental Illness

This book adds to the much too limited collection of books that provide an inside look into the world of mental illness. Shiela Hamilton presents mental illness from the perspective of the supporting spouse. Like 99% of spouses, she had virtually no knowledge or understanding about mental illness prior to her experiences with her husband. She describes in great detail the raw emotional feelings that she experienced over a 10 year period. She also describes her husband's emotional struggles. The book is very well written and delivered well by the author for the audiobook. After listening to 27 of the 30 chapters of the audiobook, I decided to read some of the reader reviews. A few reviews appear to treat Ms. Hamilton unfairly and with a lot judgment. The vast majority of people in her situation would not have been able to recognize her husband's symptoms in the marriage's early years. Most people are not trained mental health clinicians. From my perspective, the fact that she did not extricate herself from a very difficult situation for herself and her daughter speaks to her love of her husband and her basic humanity. Her humanity is further illustrated by her involvement in mental health causes and her obvious yearning to understand her late husband's illness. This book is bringing much needed awareness to the field of mental health. It will help others who are in similar situations with family members.

Where does All the Things We Never Knew rank among all the audiobooks you’ve listened to so far?

The best so far on this topic. Sheila is a master storyteller and brings the facts to life like you are living it yourself. Her story brought so much empathy her way in what she experienced in her life and how there is hope for those of us struggling living with someone who has bi polar disorder.

It was one of many touching quotes but it went something like this (remembering from audio) "Men are defined by the secrets they keep" Favorite scenes were many, her falling in love with David, her heartache losing him and not knowing what to do to help him and trying to protect her sweet daughter Sophie. Her descriptions of everything in the book shows of her writing talent. I could see all of her images vividly.

Use the same title.

I loved the research she did and the information that she added. I found myself writing these books down to do more research. I felt such a connection to this story from my own personal experience and yet even though I cried in many moments of this book, Life goes on, cherish the past--Look to the living., love them and hold on!

I would like to also add that our society can change if we bring suicide out and take the shame from it. Take QPR and active look for the signs in friends and family

Love to you Sheila

Great book made even better narrated by author

What made the experience of listening to All the Things We Never Knew the most enjoyable?

Sofie is my favorite character because she is so brave.

Sheila tells a painful, transparent, humbling story of her life with David and Colin and Sophie. I feel the humanity and love in them all. We are all in the soup together.

Thank you, Sheila, for your bravery and wisdom and taking from this tragedy, meaning and a gift for others.