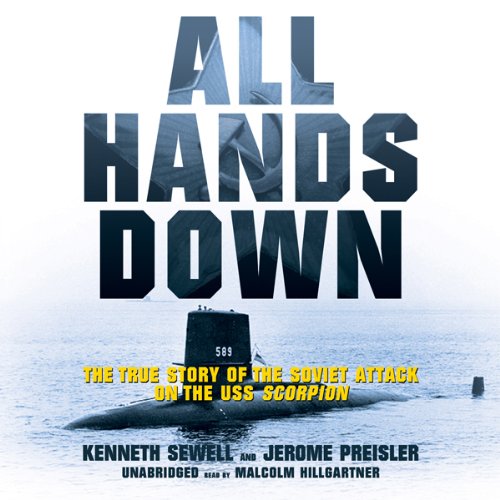 Forty years ago, in May 1968, the submarine USS Scorpion sank in mysterious circumstances with a loss of 99 lives. The tragedy occurred during the height of the Cold War between the United States and the Soviet Union. Now, drawing on hours of exclusive interviews as well as recently declassified United States and Soviet intelligence files, Kenneth Sewell and Jerome Preisler explain what really happened to Scorpion.

When a Soviet sub mysteriously sank near Hawaii, hundreds of miles from its normal station, Soviet naval leaders mistakenly believed that a U.S. submarine was to blame. Using a cryptographic unit acquired from the North Koreans to decipher classified Navy communications, they set a trap for revenge. All Hands Down explains how the plan was executed and why the truth of the attack has been officially denied for 40 years.

©2008 Kenneth Sewell and Jerome Priesler (P)2008 Blackstone Audio, Inc.
"[A] convincing argument....few will be able to resist the juicy details offered about this half-forgotten disaster and its aftermath....A satisfying historical whodunit, redolent with Cold War paranoia and tragedy." ( Kirkus Reviews)

If you like sub stories this is worth the read

Well paced, well written. Shocking... the way that in 1968 the Russians gave the US the deliberate combination of a sucker punch and a sniper's "head shot" to a fully crewed US NAVY nuclear sub that was simply going home after it's cruise. Perhaps that clear act of war was silenced because it might have caused the real thing to expand. Maybe the right decision, maybe not. You read and figure it out for yourself. A great read!

The book was written in an entertaining way, my compliments to the authors. The research was weak and explanations conflicting.

I get the feeling the project was a rush job by the publishers/editors to get it on the street. The authors give conflicting accounts of the final movements of the Scorpion (you cannot have an explosion and implosion simultaneously). There were multiple minor errors, (describing a Bekins moving van as orange in color instead of white: Allied moving vans are orange). If you are not interested in sound research and just want to wallow in a supermarket tabloid style story then the book is for you.

I recommend looking up USS Scorpion and K-129, separately, on the internet and you will see the same references the authors use with more plausible explanations as to what happened to the two boats.

Every man on the Scorpian deserves the Medal Of Honor. Americans should be rightfully outraged.

well documented and told. I remember these events very well, and would never have imagined how they were all linked together. The Walker spy family may have been the worst thing every for our country, and leaves little doubt we would have been hard pressed had a shooting war with the soviets occured.

This was a story I had no idea about. Lost Sub and the politics around the event. I love how they story is put together, no an item by item list of events. No he arranges it so you are exposed to all sides of the story. Great Book.

Interesting review of the data presenting a viable option to the fate of the USS Scorpion. Long-held suspicions finally brought to light. The book does drag on with useless information design simply to be filler but the essential core presents a much needed theory.

Amazing history, I lived thru this era!

Great book to see and understand some of the history of our lives. Some slow spots trying to set the background but necessary to clarify the sequence of events. It will clarify how the government is so misleading and deceitful. Makes one appreciate the courage and sacrifice of our silent service and the pitiful greed of national traitors.

Interesting, but not what it purports to be

This book trumpets itself as an expose of a cold-war sensation; the deliberate sinking of a US submarine by the Soviets. In actual fact, there is next to nothing about that hypothesis, which is referred to as undeniable and yet no evidence is even hinted at for such a radical claim. There is merit in this book, though. As a narrative of what it was like on submarines during the cold war, and for the families of those men in the late '60s, it is a fine testament, brought to life with real empathy. Nevertheless, the sensationalist promise of this book is, perhaps inevitably, not fulfilled, but surprisingly no attempt is even made to do so.