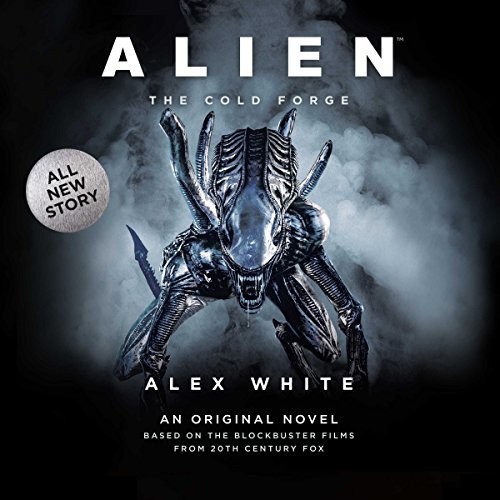 A dramatic new Alien novel, as Weyland-Yutani seeks to recover from the failure of Hadley's Hope and successfully weaponize the Xenomorphs

With the failure of Hadley's Hope, Weyland-Yutani has suffered a devastating setback - the loss of the Aliens they aggressively sought to exploit. Yet there's a reason the Company has risen to the top of the food chain. True to form, they have a redundancy already in place...the facility known as "The Cold Forge".

Remote station RB-232 has become their greatest asset in weaponizing the Xenomorphs. However, when Dorian Sudler is sent to RB-232 to assess their progress, he discovers that there's a spy aboard - someone who doesn't necessarily act in the company's best interests. For Dorian, this is the most unforgivable of sins. When found, the perpetrator will be eliminated with extreme prejudice. If unmasked, though, this person may be forced to destroy the entire station...and everyone on board. That is, if the Xenomorphs don't do the job first.

Why was this book called alien ?

The only thing that made this book listenable for me was the narrator, he was pretty good. Why was there so much attention given to the bureaucrat he was completely unlikable as a main character and a boring bad guy ? There wasn’t a single character I cared if they lived or not except for the android who I felt bad for because one of the main characters called blue was constantly violating him every chance she got and I guess your supposed to sympathize with her because she’s crippled . But in short she was a scum bag and not just because of what she did to Marcus . Oh I almost forgot about the aliens ( apparently that’s something I have in common with the author ) or the lack there of . When they were making a cameo appearance they felt shoehorned into the story and given minor details .

Nice to see the aliens as a part of the story but more interesting sub plots taking center stage. And the narrator was OUTSTANDING.

Not the best Alien book

I did not find any of the characters to be likeable, except Nick and he doesn't show up until near the end. The protagonists are awful people. The antagonist is annoying. It bothered me how the antagonist always seemed to get the drop on everyone. Annoying! Not as much of the Xenos as I expected. I particularly did not like the overly descriptive animal experiments. This book certainly does not even come close to the caliber of River of Pain and earlier alien books.

Edge of my seat

This whole thing was a freaking psychological thrill ride and I loved it from start to finish. Excellent work, I would recommend this to any Alien fan.

I am a big alien fan and this book definitely delivered. Dorian was awesome he really carried the story along with blue. I loved the back and forth dialogue so much I must have listened to the chapters several times because it was so engaging. This is I think the best audio book I have listened to. The aliens were definitely scary also.Dorian was an asshole but a much needed one also. The narrator was very good and it seems all characters came from different voices.

This was a book about a sociopath, not aliens. Should not have been included in Alien canon. Disappointing.

The best Alien novel ever written, bar none.

The Cold Forge is the best Alien novel yet written. It is even superior to Steel Egg, and is good enough to stand on its own even without its association with the Aliens mythos. I recommend it without hesitation. Kudos to Michael Braun for his superb narration, including female voices (which have been a problem for male narrators in the past, who too often make the mistake of actually attempting to imitate a woman's voice rather than focusing on conveying the character's intent in their dialogue). I must also give author Alex White credit for successfully incorporating elements of the new Prometheus/Covenant mythos regarding alien biology (specifically the black goo) into the larger Aliens franchise without compromising its established lifecycle.

Dorian made for a flawless story

I am a huge Alien fan. I have many of the books. Seen the movies over and over. The Cold Forge is a masterpiece. Dorian is the perfect antagonist. There are few fleshed out antagonist leave a long lasting impression on me.

Alex White did an excellent job with his characters. I felt for Lucy, Blue, joviar, and especially Dorian. Michael Braun was excellent. Please please team up again.

Hey Alex can we get a prequel for Dorian? He is pure narcissistic evil. The definitive sociopath. I actually about the aliens for a brief moment to delve into the mind of a monster.

Excellent, great book. Had me on the edge of my seat for the whole 11 hours.

Not an Alien Story

I'm a big fan of the Alien stories but this isn't it. This story was told from the mind of a psycho marine with Alien activities as a footnote. Not what I was expecting. This was a disturbing story of corrupt power and manipulation of command - not what I'm looking for in a syfy story.

The characters are all pretty unlikeable. It wasn't until the last third of the book that you finally feel like there's someone to root for - and that's more of a strong reaction against the villain, rather than any love for the protagonist. If you can resign yourself to that fact, this is actually a really good book. A fast paced, exciting book. I enjoyed this over any of the full cast dramatisations I've listened to, which I have always enjoyed.

Why can’t the movies be this good?

Absolutely brilliant story from the Alien universe. A creepy and intriguing tale that builds and builds, delivering tense thrills, suspense and action with characters you actually care about.

Great book that really gets what makes the franchise so popular (unlike the recent movies) and was performed well. I liked the nod to Alien Isolation too (that game needs a sequel !). Thoroughly enjoyed it and would recommend.

Outstanding across the board

I can’t place the last time I reviewed anything, let alone an audiobook, but such is my impression of this story and performance, I couldn’t help myself. It’s worth noting, I’ve read or listened to most of the books set in the Alien universe, aside from most of the crossovers. I’ve enjoyed most of them, but this one stood out. I think it has something to do with that fact that this story was honed, it focused on a specific area of the Alien universe, in this case Weyland-Yutani. It fleshed out every character and gave them purpose and motivation, but most importantly they were three dimensional. If I had first known of the premise, I may have been hesitant, as the Alien is very much a secondary player, however, given what I now know, it was definitely required to tell this story. The setting of the book is exactly what you would hope to expect from an Alien story, isolated, sterile, detached, and is very in keeping with the Weyland-Yutani fans of the franchise will have come to know and love or hate. I think the element here that transforms this audiobook from a great story in to something first-class, is the narration, it’s perfect, never have I heard a single narrator so deftly convey the necessary individuality within each character with such nuance, I can’t speak highly enough. If you are a fan of the franchise, I’m entirely confident you will love this story, but even if not, I still strongly recommend you give this book a try, you won’t be disappointed.

Was a real struggle to get through.

I struggled really hard with this, the story drags like mad, the aliens almost feel like a side story. it's missing the tension of other aliens novels and movies. I didn't care for any of the characters at all, if they all got nuked I wouldn't have cared in the slightest. plus point is the narrator, did an excellent job reading but reading poor material. I'd recommend trying out the dramatised shadows trilogy, they were really good.

Blown away by this book

A must for any aliens fan

The characters Dorian and blue are so captivating

Would give this 6 stars if I could

not a likable character in the whole story. other than that it was ok at best.

it's not bad but I feel the author needs to get laid. I dont feel all the sexual stuff is needed and can be over the top in some points. the story without that stuff is good though

This is by far the best Alien novel/audiobook ever written. In my opinion it deserves a perfect score.

The plot is so telegraphed it might as well have been read on sign posts. Moral of the story, do not mix dangerous virus that somehow attacks everything electronic in the same lab as a load of Monkey based Aliens. I listened to it twice, because I couldn't believe it was so bad!