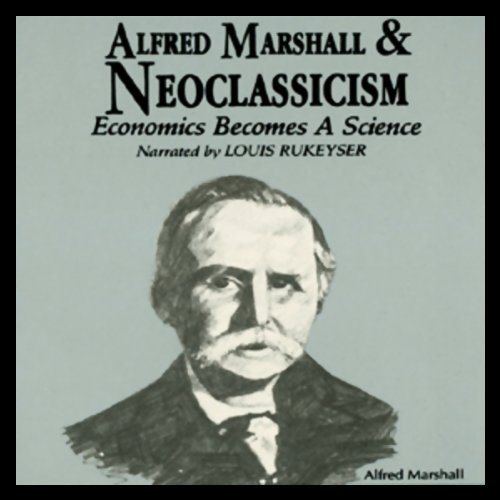 Alfred Marshall (1842-1924), a British economics professor at Oxford University, developed economics into a more rigorous, professional discipline than ever before. He invented concepts such as price elasticity, the representative firm, consumer's surplus, and other ideas that significantly enlarged the "analytical tool kit" of the economist.

Darwin's ideas about biological evolution especially influenced Marshall, who learned a great deal about economic behavior by viewing a business firm as a biological organism, complete with a life cycle. He is perhaps best remembered for explaining the interaction of supply (i.e. costs of production) and demand (i.e. consumer utility), using the famous "scissors" metaphor to explain how these forces determine the price of an object.

The titles in this series on major economists, narrated by Louis Rukeyser, are actually quite good, I have come to realize. At first I wasn't taken with them. But I have become more and more impressed. Rukeyser's narrations are perfectly pitched and easy to follow. The series writers are nearly all excellent. They muster vivid micro-biographies, place the economist's thinking in historical perspective, and do a good job of clarifying the central ideas. Most of the economics books at Audible tend to be by narrow-minded, usually youthful dogmatists of neoclassical economics, which they take to be a universal science. Demand curves, prisoners dilemma, etc.,etc. The writers in this series are much more mature thinkers and offer an ideologically balanced, historical view of economics that serves as a valuable corrective to this callow academics.

There are some flaws that make me wish the series could be republished. I would like about 20 minutes more on principles, with some updating using a few current illustrations and examples. The series also suffers from a flaw affecting many audiobooks: Actors. The quotes are read by over-enthused thespians affecting Austrian or Scottish accents with such gusto it is hard to concentrate on the words. (The "acting" menace is a particular problem in poetry audiobooks where the readers are often so overcome with dramatic passion you can practically feel the spittle in your ear.) The writing and reading in this series was quite good enough. The nervous publishers didn't have to add "excitement" to economics by recruiting eager stage talent. Aside from that, really a good, intelligent series. One more "economic" quibble. I wish you could buy six titles, Adam Smith through the Monetarists, at a reduced rate. Together the titles would amount to the best economics history lesson available at Audible, but too expensive.

Economic Intellectual History at its Best

It is very unlikely that one would find another production like this of equal quality. Not only is the economic intellectual history rock solid but it is conveyed in a way that provides meaningful color to the characters that it represents. In particular it gives the listener a view of Alfred Marshall that they are I am likely to of known about by simply reading standard economic biographies.

I like the relatively "bite-sized" format of this series, as narrated by the always serviceable Louis Rukeyser. Among these, this book is a standout. While there is no such thing as an uninteresting moment in human history, I find Marshall and his moment particularly fascinating. We hear echoes of Victorian, even Medieval (further back, some ancient), senses of personal moral virtue and the greatness of building individual character. These resonated through Enlightenment thinkers such as Adam Smith, into the mind and patient craft work of Marshall, who kept the moral, humane and human-scale aspects even as he built early quantitative models for economics. He comes from an era when an economist was a moral philosopher, a wide-ranging intellect, yet returning to an individual human compassion and granularity, before pulling back to great vistas again. All this Marshall funneled into an elegant system with math rigor. Being in Marshall's company (and others: Smith, Jevons, Keynes, Veblen) via this readily understandable presentation is an incredible way for me to spend a day. While plenty of this series' content is repeated in more detail in other books, there is a sprightliness to this shorter, condensed approach that has deepened and broadened my insights into subjects I had studied in lengthier titles. Sometimes there are too many trees and leaves to see a forest well, too much detail and padding in a book, and this is the remedy for me.

Great, but not fantastic

I like this series a lot and I have come to over expect from all of them now. This one was good, but since Marshall's contributions are the bread and butter of any economics student, I didn't learn much new.

If you could sum up Alfred Marshall and Neoclassicism in three words, what would they be?

It was an engaging program and enlightening. Essential knowledge for anyone with and interest in economics