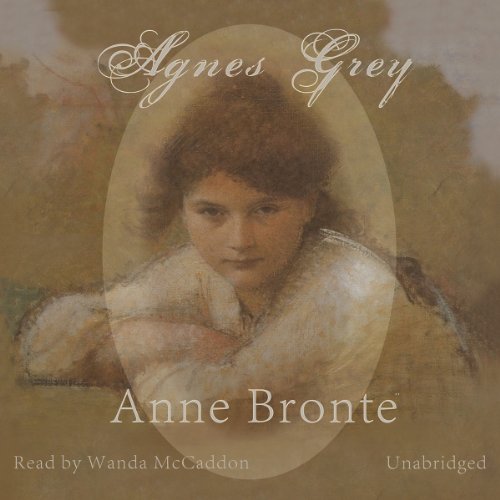 Written when she was 26, Agnes Grey is Anne Bronte's first novel. It tells the story of a rector's daughter who has to earn her living as a governess. Drawing directly from her own experiences, Anne Bronte set out to describe the immense pressures that the governess' life involved: the frustration, the isolation, and the insensitive and cruel treatment on the part of employers and their families.

Too often, Anne Bronte has been portrayed as a saintly, self-effacing shadow of her elder sisters. But clearly she possessed resources of courage and determination equal to theirs, together with a sweetness that was all her own.

I think this is the MOST unappreciated of the Bronte sisters' works. Although it starts out slowly, the listen is worthwhile for the prose, novel structure and commentary on 19th century women's roles, especially the "governess" - who appears as only a shadow in most 19th centry lit.

If Anne Bronte Had Lived Another Ten Years

Did you notice in Charlotte Bronte's Jane Eyre, during a none too polite discussion (shall we say snide and belittling discussion) of governesses by Miss Ingraham and her friends in front of the governess Jane Eyre, there was a mention of a former governess, Miss Grey? I think this is subtle reference to her sister Anne's book and her actual work. I tend to view the Bronte sisters as a single entity, a literary corporation with each work a different facet of one being. While I have seen some slighting remarks concerning Anne Bronte, I think that if she had lived, she could have easily been the greatest writer of the three sisters. At 26, she had already written The Tenant at Wildfell Hall, Agnes Grey and some very respectable poetry. These are remarkable achievements for one so young. She has nothing for which to blush. Her detractors do.

Have you ever wished to come back to visit these families for whom Miss Grey worked a ten year later? Can you imagine in what dreadful state they would have fallen? Miss Grey with her firm principles and hard work would have risen ever higher while her betters would have sunk ever deeper toward disaster. With some flights of wild imagination and cameos by the supernatural, the Brontes wrote what could be termed docu-dramas. They stuck rather close to the truth. Indeed, from Charlotte Bronte's letters and other papers as well as Elizabeth Gaskell's biography of Charlotte, all the Bronte books can be viewed for the most part as honest reporting rather than fictional fancy. Only the names have been changed to protect the guilty. Oh, before I quit, of course, Agnes Grey rides off into the sunset with her man into happy ever after. It was a struggle to get to happy ever after but she did get there.

A different time and place

A slower time, less of instant gratification, and certainly a different approach to people and their stations in life, but I found many things that haven't changed a bit. Just try to tell someone that their children won't behave. Few parents do anything more than get angry with the messenger. I really enjoyed this book, and the thought of reading it when it was published. If you are looking for current times, shopping malls, cell phones, etc. then this classic is not for you.

I think I'll bind a hard copy for myself and the shelf. I quite enjoyed my time with this book.

The story and the narrator did their job. They both managed to transport me to the world of this patient governess. The first "Nanny Diaries", shedding light on the culture of entitlement.

Interesting, and well read, but not as strong as even a mid-level Gaskell novel.

one of the problems with reviewing classics....

I am listening to these with a 21st century ear, and purposefully don't do a lot of research before reading a classic, just because I do want a genuine response -- and if intrigued I'll do my research later. The fun aspects of this book are the title character's experiences as a governess with...uniformly terrible children. These scenes are vivid and real, but the plot is predicatable, the ending pat...may have been more riveting in it's time but I thought a rather trivial read and so has not stood the test of time as so many other wonderful classics have.