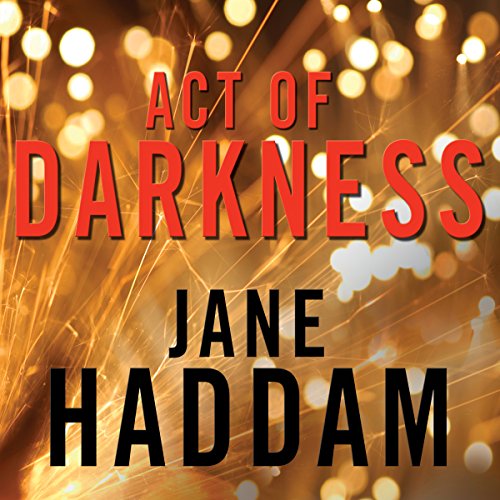 Stephen Fox may be a moron, but he may also be America's next president. The dimwitted legislator is just smart enough to know when to smile for the camera. But two women stand in the way of his campaign: his mistress and his wife, who has never recovered from the death of their daughter, a pain she manages by devoting herself to fundraising for children with Down syndrome.

During a weekend-long charity extravaganza on Long Island Sound, Fox's candidacy goes off the rails in a spectacularly bloody fashion. Ex-FBI investigator Gregor Demarkian is the first on the scene. Fox's entourage of political handlers may lie for a living, but Demarkian has a way of ferreting out the truth, and he will nab the killer before the last firework sounds.

I've really enjoyed David Colacci's excellent readings of the most recent Jane Haddam mysteries and I squeaked with joy when I saw they are starting to release the back catalog on Audible too. Colacci has such a nice deep voice, soothing yet expressive, and I love Jane Haddam's mysteries, they follow the pattern of the Golden Age (a logical mystery, fair clues, interesting characters) but they are set in modern America. Each of Haddam's books is framed by Gregor Demarkian and the crew from Cavanaugh Street, but dives deep into a different aspect of Amercan society. The first dozen or so myseries in the series also showcase a different holiday ( the series title was originally the Gregor Demarkian Holiday Mysteries, but I think she dropped the holiday aspect when she changed publishers, anyway, it disappears about halfway through the series). Ths time, the holiday is July the Fourth and the aspect of American society being plumbed is the political sausage factory, with lobbyists, political operatives and a Senator who is being groomed for the presidency gathering at the lavish Oyster Bay home of a Hollywood legend. It's really good fun.