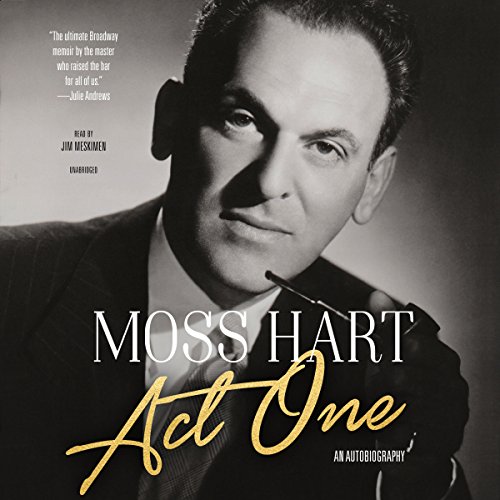 Moss Hart's Act One, which Lincoln Center Theater presented in 2014 as a play written and directed by James Lapine, is one of the greatest American memoirs - a glorious memorial to a bygone age filled with all the wonder, drama, and heartbreak that surrounded Broadway in the early 20th century. Hart's story inspired a generation of theatergoers, dramatists, and readers everywhere as he eloquently chronicled his impoverished childhood and his long, determined struggle to reach the opening night of his first Broadway hit. Act One is the quintessential American success story.

Good but not great

Yes, especially if you like theater. The story, about the early days of Broadway, is fascinating and Hart finds himself in all sorts of interesting situations.

What other book might you compare Act One to and why?

He was way too slow a reader, pauses too long. I had to listen to it at 1.5 speed and it still sounded normal.

After reading this I am now convinced that I was there with Hart as all the great events of his life unfolded.

There are few books I consider favorites this will be one of them. Great telling of an incredible career from the ambitious beginning to first success. I felt like it was someone recounting events to me personally in a most sincere and inspiring dialogue. You could feel the joy with Moss Hart’s first success and understand what to took to achieve it.
This was a book club selection, wise domination. Five stars are not enough.

Are you a theatre person?

I will admit I am old enough to remember many of the people mentioned in this book. It is a first hand account of a different time. I had read about this book, and I had heard people talk about it, but I had never read it, and Audible had it!

One of the finest theatre autobiographies ever written. Beautifully read - with the exception of Bow Bells, which is pronounced Boe Bells, not Bough Bells. Don't producers ever check these things? Oh well. it's still a great book.

A great story of astruggling artist

For anyone who loves the theater, this is a moving story of the struggles and triumphs of a talented playwright. Told with humor and candor, I found it fascinating and touching.

The narration made this book far more interesting than it might have been otherwise. A real pleasure to listen to. Very interesting life story from a man with a beautiful mind who turned barriers into sailboats. This is about a time that otherwise would have been lost for many people to venture into. A time when people really had to hustle without the social nets we have in place today. When people were grateful for work and had to stretch themselves for simple opportunities. A different universe actually. Not a book you will forget you read. Add this to your good memories!

Narrator was EXCELLENT. Most enjoyable autobiography. Now want to read a bio to get a realistic version of Moss Hart’s life.

Astonishing story of how this poor boy becomes a major playwright. Those people who think being in the entertainment business is glamorous or easy would do well to read this anxiety ridden, sometimes heartbreaking, often harrowing but ultimately uplifting story. one of the best autobiographies I've ever listened to. The narrator was perfection.

Jim Meskimen's reading was exceptional. I never wavered a moment from thinking this was Moss Hart telling his story of struggle, perseverance, bitterness, audacity, talent and luck as a young playwright. He captured all of Hart's nuances, sounded like a 20th century New Yorker in tone and attitude, and seemed entirely in sync with Moss Hart's perspective and view of the theater world of the 1920s-1930s.

Much is written about developing "grit" and "perseverance" in young people. This story -- of a young man forced to leave school after 8th grade, making the most of his opportunities, wrestling with his own doubts and fears, reckoning with the soul destroying aspects of poverty, dusting himself off after being knocked down in humiliating ways -- is an inspiring lesson. A bit dated in how PG it all seems -- but the reader has the sense that those more risqué aspects of that world are omitted rather than sugarcoated in this memoir written in the 1950s. And having background understanding of and interest in 20tj century Broadway theater are probably essential in appreciating this book. But Jim Meskimen must get full credit for making this take of another era feel so alive and immediate and the audio book feeling like Moss Hart is right there with you in 2016, telling you what happened in that Broadway producer's crowded gritty Times Square office.