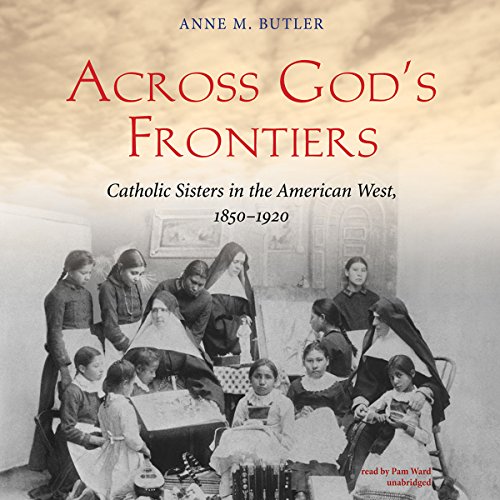 Roman Catholic sisters first traveled to the American West as providers of social services, education, and medical assistance. In Across God’s Frontiers, Anne M. Butler traces the ways in which sisters challenged and reconfigured contemporary ideas about women, work, religion, and the West; moreover, she demonstrates how religious life became a vehicle for increasing women’s agency and power.

Moving to the West introduced significant changes for these women, including public employment and unconventional monastic lives. As nuns and sisters adjusted to new circumstances and immersed themselves in rugged environments, the West shaped them; and through their labors and charities, they in turn shaped the West. These female religious pioneers built institutions, brokered relationships between indigenous peoples and encroaching settlers, and undertook varied occupations, often without organized funding or direct support from the church hierarchy. A comprehensive history of Roman Catholic nuns and sisters in the American West, Across God’s Frontiers reveals these women as dynamic and creative architects of civic and religious institutions in western communities.

About the author: Anne M. Butler is trustee professor emerita at Utah State University and past editor of the Western Historical Quarterly. Author of numerous articles and books, including Daughters of Joy, Sisters of Misery, she has published extensively on matters of race, class, and gender in the history of the American West.

“As Butler explains the interaction between the American West and the Catholic nuns missioned there, she produces a richly textured study complemented by prodigious research and elegant writing. More than a synthesis of secondary literature, Butler’s book renders a gracefully woven interpretation of the entire region.” (Carol K. Coburn, Avila University)
“A profound undertaking that demonstrates the powerful nexus between gender, religion, and region. This skillful blend of narrative and analysis unites oftenignored contributions of Roman Catholic nuns with the metaphorical, if not mythical, significance and influence of the American West.” (Roberto R. Treviño, University of Texas, Arlington)

Interesting if not one sided

Very feminist in form and obvious in disdain for priests. Has some valid information and insights however.

This book may not be non fiction but it opens your eyes to the treatment of people of color ALL colors also early struggle with man vs women, showing the true grit of Frontierwomen.

I was very disappointed in this book, and I stuck with it longer than I should have hoping it would get better. It reads like a very long summary without much personalization. This book talks about the nuns as a whole often only saying "one nun said" when giving quotes. I would have much rather the author used a few nuns by name to at least give continuity to the story. Instead this book is a large generalization of the topic. I'm sad because it seemed like a great topic, but either there was not enough research out there to be done, the author did not dig enough into available resources, or the author chose to write this without much depth.

What could Anne M. Butler have done to make this a more enjoyable book for you?

At first I thought it was the narrator making the book unenjoyable, but then I realized there really wasn't more she could have done with it to make it more interesting.

Yes. A fascinating history of young women religious leaving the security and relative comfort of their established European, Canadian, or New England convents to set up new missions in the undeveloped western U.S. They established the first schools and hospitals and cared for those at the lowest rung of the social ladder, especially new immigrants and Native Americans. They did this under almost unimaginably difficult conditions, with scant support from the Church’s hierarchy and with no support from the nascent governmental administration. They also accepted students, orphans, and patients for care without regard to religious affiliation.

The author researched the archives of the religious orders to develop this compelling narrative. Sharing generously from journal entries and letters from the missions to the Mother Houses, as well as biographical backgrounds of the Sisters, the history is related in an engaging manner.

Easy and comfortable to listen to.

This history seems well researched and is related in a compelling manner that keeps the listener both engaged in a fascinating story while informing them of a significant contribution to the development of the American West.