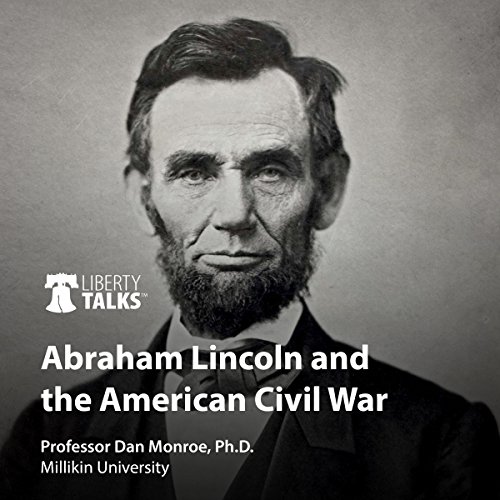 In this insightful history course, you will take a deeper look at Abraham Lincoln's powerful presidency and the war that shook America 150 years ago. Presented by award-winning professor Dan Monroe (PhD, University of Illinois Urbana-Champaign), these lectures brim with fresh insights about the greatest American president.

Raised in Kentucky and Indiana by a father who did not value education, Lincoln had only one year of formal education. Rented out for day labor by his father, the young Lincoln gained insight into the injustices of slavery and would go on to become a self-educated lawyer.

After examining his colorful legal adventures and improbable ascendancy to the presidency, you will gain an historian's insight into the causes of the Civil War. You will explore the war's surprising first year, the chaos of the first battle at Bull Run, the emergence of George McClellan, and the dramatic success of Confederate arms under General Robert E. Lee. With fresh insight, you will probe Lincoln's decision to embrace emancipation and explore the reasons behind this game-changing policy change. Examine Lincoln's unforgettable speech at Gettysburg in 1863, wherein he upheld the Declaration of Independence as the key founding document of the United States of America.

Finally, you will explore civil liberties in both the Union and the Confederacy during the war, the emergence of Ulysses S. Grant, and Lincoln's memorable reflections on the conflict in his Second Inaugural Address, delivered shortly before his tragic and untimely death.

You will relish each lecture as you gain a deeper understanding of Abraham Lincoln and the American Civil War.