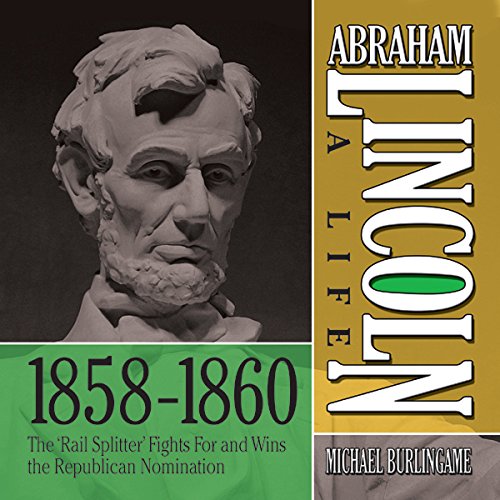 The 'Rail Splitter' Fights For and Wins the Republican Nomination (1859-1860)
"That Presidential Grub Gnaws Deep" - Pursuing the Republican Nomination (1859-1860)
Lincoln's speeches were being published and widely circulated, as he began to practice law again as a means of income. When John Brown's raid on Harpers Ferry occurred, Democrats cited this as an example of slave-agitation caused by the Republicans. Lincoln also began to address the southern threat of succession, deeming it an 'act of treason'. In 1860, leading Republicans sought to boost Lincoln's candidacy, as many saw him as the 'more-electable' of the candidates. Of all of the speeches in his political career, the ones that seemed the most difficult for Lincoln were his New York speeches as they made him feel uncomfortable and out of place. During this time, Lincoln acquired the moniker "rail-splitter" which stemmed from a casual comment he made.

"The Most Available Presidential Candidate for Unadulterated Republicans" - The Chicago Convention May 1860
Lincoln seemed to have a good chance of winning the election, despite his opponent, William Henry Seward. One major hurdle Lincoln faced was that he was seen as radical compared to Seward. Also, Seward supporters ranged from the sophisticated to the brash, and often made Lincoln feel inferior. But Seward was racked with mistakes of his political past in New York which included fiscal impropriety. A major victory for Lincoln at this point is Indiana, a victory that slows Seward's momentum. Lincoln ultimately beats Seward for the Republican nomination.

©2009 Michael Burligame (P)2009 Gildan Media Corp
"Lincoln scholars have waited anxiously for this book for decades. Its triumphant publication proves it was well worth the wait. Few scholars have written with greater insight about the psychology of Lincoln. No one in recent history has uncovered more fresh sources than Michael Burlingame. This profound and masterful portrait will be read and studied for years to come." (Doris Kearns Goodwin)
"The most meticulously researched Lincoln biography ever written. Burlingame's Lincoln comes alive as the author unfolds vast amounts of new research while breathing new life into familiar stories. It is the essential title for the bicentennial." ( Publishers Weekly)

Outstanding book, but wish I would have known that Volume 2 of this work was not available in audiobook format. I was left hanging after listening to the first volume. I attempted to contact the audiobook producer but did not hear back.

Missing Chapters 16-19 of Volume 1 of this work

Would have been terrific if all the content was included and/or the descriptions of the audio books did NOT imply that this was the whole book. Not only missing volume 2 but volume 1 is incomplete as well (based on audible.com's description compared to the DTB.)

Has Abraham Lincoln turned you off from other books in this genre?

What does Sean Pratt bring to the story that you wouldn’t experience if you just read the book?

What else would you have wanted to know about Michael Burlingame’s life?

About Burlingame? Nothing. About Lincoln - the (DTB) book covers almost all of it in GREAT detail! The audio versions are complete based on what portions of the DTB are actually included.

Primary issue is buying these 6 audio books thinking I was getting all of "Abraham Lincoln: A LIfe" by Burlingame. The descriptions and Critics Section of each of these audio books should be updated to reflect the true relationships with the DTB version.