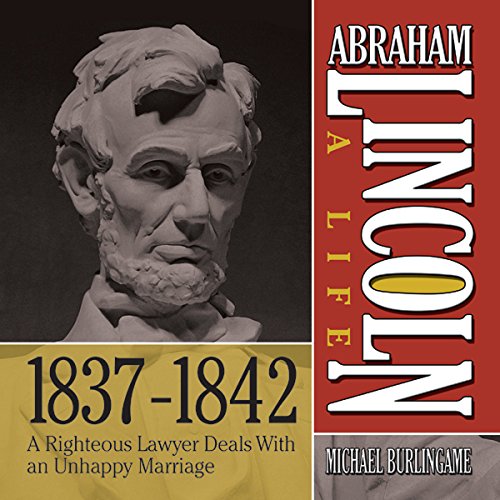 A Righteous Lawyer Deals With an Unhappy Marriage (1837-1842)
"We must fight the devil with fire" - Slasher Gaff Politico in Springfield (1837-1841) Lincoln's studies lead to him becoming a successful lawyer in Illinois. He is often published anonymously during the political campaign of 1837 and his works include detailed rebuttals against opposing politicians. As a pivotal member of the Whig party, Lincoln openly begins to condemn mob violence and lynching, and begins to publicly denounce slavery in his speeches. This chapter details much of the wrongdoings and disorderly conduct that mark the political landscape of the time.

"It would just kill me to marry Mary Todd" - Courtship and Marriage (1840-1842)
This chapter is entirely dedicated to Lincoln's courtship and marriage to his wife, Mary Todd. His complete opposite, she is abusive, spiteful, argumentative and extremely thrifty. Many attribute Lincoln's drive to become president to her, as even before their marriage, she referred to herself as a president's wife and her disagreeable temperament often drove him out of the domestic realm and into the streets with the common people, making him extremely popular in the community.

©2009 Michael Burligame (P)2009 Gildan Media Corp
"Lincoln scholars have waited anxiously for this book for decades. Its triumphant publication proves it was well worth the wait. Few scholars have written with greater insight about the psychology of Lincoln. No one in recent history has uncovered more fresh sources than Michael Burlingame. This profound and masterful portrait will be read and studied for years to come." (Doris Kearns Goodwin)
"The most meticulously researched Lincoln biography ever written. Burlingame's Lincoln comes alive as the author unfolds vast amounts of new research while breathing new life into familiar stories. It is the essential title for the bicentennial." ( Publishers Weekly)
"The book need not be heard in one sitting. Each part stands alone." ( Publishers Weekly)

What a wife, and A. Lincoln's connection with NWO

I am continuing to enjoy this series of readings of Marshall Burlingame's biography of Abraham Lincoln.

I had heard that Mary Todd Lincoln was difficult but I did not know HOW difficult. I appreciate the author cited source after source for his description of Mrs. Lincoln because it is almost unfathomable.

The other minor highlight was Lincoln's role in moving the capital of Illinois to Springfield. He also served to get the State of Illinois into debt over its head to the Rothschild family, a debt for canals, roads and other improvements -- a debt so large that Illinois defaulted and finally was able to pay off about 50 years later in the 1880s.

At one point, members of the legislature were so angry with Lincoln that he had to climb through a window to escape their wrath uninjured. It is hard being a lawyer for bankers!