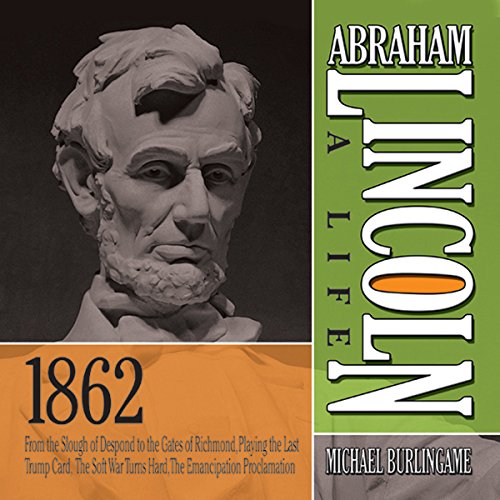 "I Expect to Maintain This Contest Until Successful, or Till I Die, or Am Conquered, or My Term Expires, or Congress or the Country Forsakes Me": From the Slough of Despond to the Gates of Richmond: (January - July 1862): Cameron is replaced by Stanton. The president begins to supervise the army and take charge of his administration. By presidential order, McClellan is goaded into moving from a defensive position to an offensive. Instead of following Lincoln's plan, McClellan chooses an attack on Richmond. McClellan's indecisiveness and tardiness in battle have many pushing for a replacement. The Union suffers a crushing defeat in the Seven Days Battle. During all this, Willie Lincoln dies of fever.

"The Hour Comes for Dealing with Slavery": Playing the Last Trump Card: (January - July 1862): Lincoln puts forward his proposal of gradual emancipation with monetary grants to participating states. Many criticize the plan as too expensive. The president proceeds to emancipate the District of Columbia. However, he is forced to revoke General David Hunter's emancipation decree. Lincoln signs legislation extending political acknowledgment to Haiti and Liberia, approves an accord banning the African slave trade, and forbids the military to return slaves escaping from the South.

"Would You Prosecute the War with Elder-Stalk Squirts, Charged with Rose Water?" The Soft War Turns Hard: (July - September 1862): Lincoln carries out a strategy to replace the social system of the South. McClellan's failures lead to him being replaced by General Henry Halleck. The army of Potomac is withdrawn to a new location. The Second Battle of Bull Run turns into a devastating loss for the Union. McClellan is put in charge of Washington's defense, causing general disapproval. The bloody semi-victory at Antietam brings mixed feelings. Lincoln prepares a colonization plan in an attempt to make emancipation more attractive to Border States, Unionists in the Confederacy, and Northern Conservatives.

"I Am Not a Bold Man, But I Have the Knack of Sticking to My Promises!": The Emancipation Proclamation: (September - December 1862): Lincoln's announcement about the coming Emancipation Proclamation has severe Electoral backlash. Lincoln visits the Army of the Potomac in an effort to drive it to action. McClellan's hesitance dries up the last of Lincoln's patience. The president again urges Congress to adopt a gradual compensated emancipation. The Northern army is defeated at Richmond. Congress and the people grow disenchanted with the Lincoln administration. A cabinet crisis ensues. Allegations are raised against Seward. Many fear a coup d'état. Lincoln signs the Emancipation Proclamation.

©2009 Michael Burligame (P)2012 Gildan Media LLC
"The most meticulously researched Lincoln biography ever written. Burlingame's Lincoln comes alive as the author unfolds vast amounts of new research while breathing new life into familiar stories. It is the essential title for the bicentennial.... The book need not be heard in one sitting. Each part stands alone.” ( Publishers Weekly)
"…a profound and masterful portrait." (Doris Kearns Goodwin)