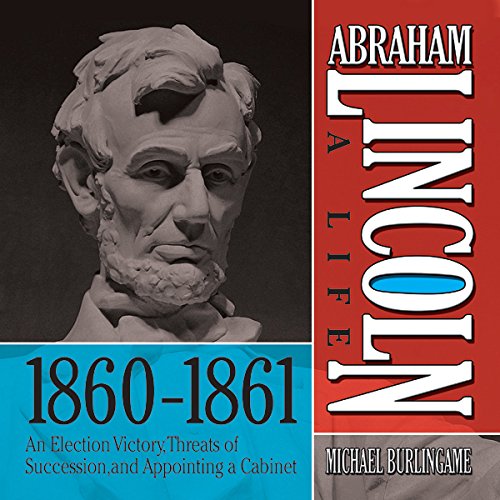 Publishers Weekly describes this book as "the most meticulously researched Lincoln biography ever written. Burlingame's Lincoln comes alive as the author unfolds vast amounts of new research while breathing new life into familiar stories. It is the essential title for the bicentennial." Publishers Weekly also notes, "The book need not be heard in one sitting. Each part stands alone." Now Gildan Media brings to you, chapter by chapter, what Doris Kearns Goodwin calls a "…profound and masterful portrait."

"I Have Been Elected Mainly on the Cry ‘Honest Old Abe’"

The Presidential Campaign (May - November 1860): Lincoln campaigns for the presidency and the new Republican Party struggles to win the popular support of ex-Whigs and disaffected Democrats. They must also placate the Seward and Chase camps with patronage promises, fend off charges of being the party of "negro equality" and keep the abolitionist elements of their coalition in line. Since presidential candidates did not themselves campaign across the country, both Lincoln and Douglas rely on surrogates to get their messages out to the public. The chapter closes with Lincoln’s election victory being dampened by threats of Southern secession.

"I Will Suffer Death Before Me Will Consent to Any Concession or Compromise."

President-elect in Springfield (1860 – 1861): Now the president-elect, Lincoln must contend with meeting hordes of office seekers, delivering on patronage promises and filling his cabinet with an eye on regional political calculations, all while talk of secession is building momentum throughout the South. Lincoln ponders the seriousness of the threat and his response to it. Meanwhile, from Washington come calls for Lincoln and the Congress to appease the radical Southern elements with the Crittenden Compromise. Lincoln’s rejection of these concessions and its subsequent failure, along with the South’s misreading of Northern political divisions will ultimately pave the road to war.

"What If I Appoint Cameron, Who’s Very Name Stinks in the Nostrils of the People for His Corruption?"

Cabinet-Making in Springfield (1860 – 1861): Navigating the minefield of both inter-party and regional politics, Lincoln begins to hand out patronage posts as well as fill his cabinet. His appointments of Cameron, Seward, and Chase stir strong reactions both within and outside of the Republican Party, leaving few happy with Lincoln’s choices. From the beginning, he struggles with Seward’s ambition to control him and run the new administration. Secessionists begin taking over U.S. government facilities sparking outrage throughout the North, but Buchanan will not act decisively to remedy the situation, instead leaving it for Lincoln to deal with upon becoming president. As he and his family bid Springfield goodbye, Lincoln begins the delicate and momentous task of drafting his inaugural address.

©2009 Michael Burlingame (P)2012 Gildan Media LLC
"Lincoln scholars have waited anxiously for this book for decades. Its triumphant publication proves it was well worth the wait. Few scholars have written with greater insight about the psychology of Lincoln. No one in recent history has uncovered more fresh sources than Michael Burlingame. This profound and masterful portrait will be read and studied for years to come." (Doris Kearns Goodwin)

I got so hooked on Lincoln. I truly great narrative on an incredible man.