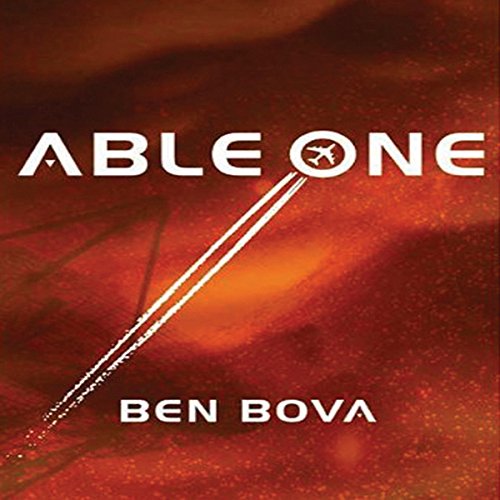 When a nuclear missile launched by a rogue North Korean faction explodes in space, the resulting shock wave destroys most of the world’s satellites, throwing global communication into chaos. U.S. military satellites, designed to withstand such an assault, show that two more missiles are sitting on launch pads in North Korea, ready to be deployed. Faced with the threat of a thermonuclear attack, the United States has only one possible defense: Able One.

ABL-1, or Able One, is a modified 747 fitted with a high powered laser able to knock out missiles in flight. But both the laser’s technology and the jet’s crew is untested. What was originally a training flight with a skeleton crew turns into a desperate race to destroy the two remaining nukes. Will Able One’s experimental technology be enough to prevent World War III—especially when it becomes clear that a saboteur is on board?

Able One is a timely thrill-ride by one of science fiction’s most respected novelists.

“Bova proves himself equal to the task of showing how adversity can temper character in unforeseen ways.” ( The New York Times)

A mind is a terrible thing to waste. So is an Audible credit. You will waste over eight hours of your mind and a credit if you buy and then read this techno-borer. The historical development is silly, the characters are juvenile, and the reader sounds as though his batteries are running out. The suspense, techno-thriller, electro-magnetic pulse, near end of the world genre has many entertaining works. This is definitely not one of them.

Scared the BEJESUS out of me.

Loved the book but it is only fiction because it hasnt happend YET! This novel was completly beliveable and was acualy late for work because I couldn't stop listening. I only gave it 4 stars because I thought they raced through the book too fast. Should have been longer and thought much more could have been added. A wonderful listen all-in-all and highly recomend it to all listeners.

A dash of cold reality

As someone who has spent a lifetime being worried and concerned about the proliferation of nuclear weapons and what rogue states might do under certain circumstances, the subject of North Korea always comes up. I am a very quiet fan of Ben Bova but I have not read all of his works. His Martian trilogy is quite interesting if somewhat hokey in spots and Voyager was great listening. This particular novel is close to William R. Forstchen's "One second after" and John Birmingham's "Without Warning" but is a more up beat about the outcome of an EMP attack on the US. As usual, the narration was excellent and Stefan Runicki's diction made the characters come to life. This is not the best of all possible books dealing with this subject but it is certainly gripping and I could not stop listening.

Intelligent, highly interesting and timely, suspenseful, well-paced, Bova has a remarkable gift in his understanding of science, politics, international affairs, and human motivations. And he’s a damned fine writer. I’m thrilled to have discovered him. An A-double plus also for Stefan Rudnicki’s performance as well!

This is a very easy listen that basically sticks to the central story.