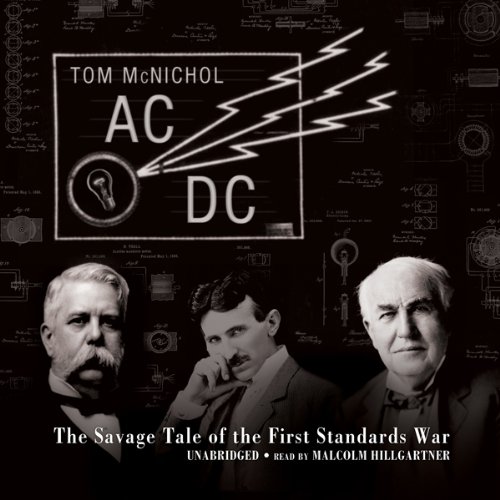 Long before there was VHS versus Betamax, Windows versus Macintosh, or Blu-Ray versus HD-DVD, the first and nastiest standards war was fought over how electricity would be transmitted around the world: alternating current (AC) and direct current (DC). The savage showdown between AC and DC changed the lives of billions of people, shaped the modern technological age, and set the stage for all standards wars to follow.

AC/DC tells the little-known story of how Thomas Edison bet wrong in that war, eventually losing control over the "operating system" for his future inventions - not to mention the company he founded, which would later become General Electric. Today's Digital Age wizards can take lessons from Edison's fierce battle: control an invention's technical standard and you control the market

©2008 Tom McNichol (P)2008 Blackstone Audio, Inc.
"Though a battle over electrical standards sounds dry, this tale is anything but....[The] book tantalizingly scratches the surface of Edison's ingenuity and force of will, Westinghouse's shrewd business sense, and most of all the sheer eccentricity of Nikola Tesla." ( Publishers Weekly)

This book is awesome all the way around!

Highly recommended for those who want to know more about Edison, Westinghouse and Tesla, and the roles they played in the electrification of the world.

I had a visceral response as I listened to the tales of the electrocutions of the various species of dogs. I actually fast forwarded after the first 5 or so minutes in hopes that the results they found in the first couple dogs would be enough to tell the story.

While Edison was brilliant and motivated he really didn't have much human velcro. This was dominant throughout this book.

I recommend this book because of the importance of history - and strangely enough, how things really haven't changed in 100+ years from a human interaction and business posture.

I really liked this book. I had been unaware that Edison was such a , , , snot. So stubborn and insistent. Tesla comes off as the hero here but I am willing to believe it went down that way--especially now that there is such a terrific looking car, the Tesla, for sale! Held my interest and I appreciated learning and being entertained at the same time. Would be a good movie. Edison's part would be the one to have, though! He is the more interesting character in many ways. Not "riveting" but close

it was surprisingly good

I was not really sure how much i would like this book but it was surprisingly good.

A real gem of an Audiobook! Very well written and narrated. Listen to this, and you'll never think of Edison the same way again! Wow! He was almost something like a cross between a carnival barker and a used car salesman (with a bit of genius).

You won't be sorry if you get this one! Enjoy!

I liked this story