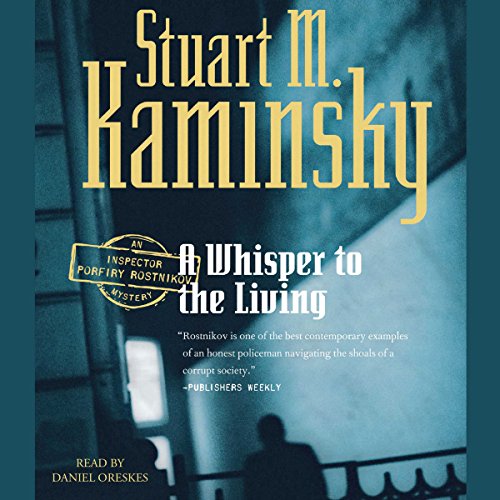 Inspector Porfiry Petrovich Rostnikov is an honest policeman in a very dishonest post-Soviet Union. He and his team are searching for a serial killer who has claimed at least 40 victims. And then there is the problem of protecting a visiting British journalist who is working on a story about a Moscow prostitution ring. In doing so Rostnikov and his team uncover a chain of murders that lead to a source too high to be held accountable if the police want to keep their jobs - or their lives.

This is a great series, it helps to be a follower and to have some familiarity with the characters. The economy of language is marvelous and the multiple story lines help paint a complex if bleak picture of life in Russia. The narration is a bit over the top with a 'Moose and squirrel must die' Slavic accent but otherwise completely convincing and very enjoyable.

Kaminsky fans will not be disappointed.

Kaminsky's wonderful detective Rostnikov series never disappoints. His characters have such depth and the stories are always interesting. After having read almost all of Kaminsky's other Rostnikov books listening to the book with the reader's Russian accent added to my enjoyment. I HIGHLY recommend "A Whisper to the Living".

Mr. Kaminsky owns this little corner of the world.

Where does A Whisper to the Living rank among all the audiobooks you’ve listened to so far?

Somewhere in the top third.

What was one of the most memorable moments of A Whisper to the Living?

Attention: Spoiler of a kind. The end of the book is the wedding of Viktor Rostnikov, son of Porfiry and Sarah, and Elena Timofyeva, one of the detectives in the Senior Rostnikov's unit. We also discover that she is pregnant, and thus Porfiry and Sarah are grandparents. The scene is not just a bunch of drunken rowdy Russians, but it is played by describing the exits of various characters whom we know: Karpo, Tkach, the Yak and others. It is very moving in its way.

What does Daniel Oreskes bring to the story that you wouldn’t experience if you just read the book?

I love his variety of Russian accents. There are so many characters in the book that sometimes it is difficult to tell them apart, but the narrator helps us by varying the accents and other patterns of speech (Russianized American English, that is). I have read most of the books in this series, and I know and love these characters very well, although loving Emil Karpo is almost a self-cancelling phrase. He is a man with zero human feelings. But the primary characters are like a big, sprawling Russian family, and we get to know them as a group and as a collection of individuals.

Not possible for me. I don't have the stamina to listen to a book for ten plus hours without falling asleep. Also, I like to stretch out the experience, because when it's over, it's over.

Mr. Kaminsky's imagination is limitless. he keeps creating new adventures for these people which are examined from many angles, from the small individuals all the way up to the national Russian and international Russia-in-the-world factors. The politics of Russia and Moscow in particular are described in ways that teach us a lot. These are treasures to read, and then to go back to and re-read after a few years have gone by.

Stuart Kaminsky is one of my 5 favorite authors

My wife and I have bought over 7000 Audible titles in the last 20 years and Stuart Kaminsky is definitely one of our 5 most favorite authors. We began the series with Recorded Books rentals but decided we wanted to listen to these stories more than once. All of this series describes life in Russia after the fall of Communism. My friends who are Russians, of hat era, tell me that the series of novels is extremely believable. The novels in this series captivated us; as does this title, in the story line and performance of it.

Stuart Kaminisky has been one of my most favorite authors. I especially love this dumpy old deceive and his exploits. I believe Kaminisky is a genius. His Lieberman mysteries are excellent too. His heros, two old men who live by their wits and abilities are my favorites for at least 30 years now. I also loved the Rockford series on TV. He wrote that too.

this was a very boring book

Not bad but I could have spent my money better

I would chop the last three or four chapters, They all deal, at very unnecessary length, with what happened after the case was solved with all the different characters and they failed to interest me very much.
I also think, that although the Russian accent was fairly convincing, if the story is set in Russia and all the characters (except for one who doesn't even speak that often) are Russian it is very unnecessary - and at length annoying - to use an accent. It would have been much more enjoyable and authentic in just plain English. One time I listened to an audiobook (can't remember for sure might have been a Jo Nesbo), which was set in a foreign country and the narrator used various English accents to give a personality to the characters and it worked wonderfully.

One of the reasons I bought this one was because I I heard him in American Gods and loved his voice and style. It was only the Russian accents throughout the entire book I found unnecessary this time.

Yes it actually might work on film much better. If directed by a Russian would be all the more fascinating.

I liked the old-fashioned style, although I can't say it was an excellent read (listen).
It might have helped if I had not listened to this one just after I had finished The End of The Affair by Graham Greene, which was a deeply moving and thought provoking masterpiece and the contrast might have been just too great.