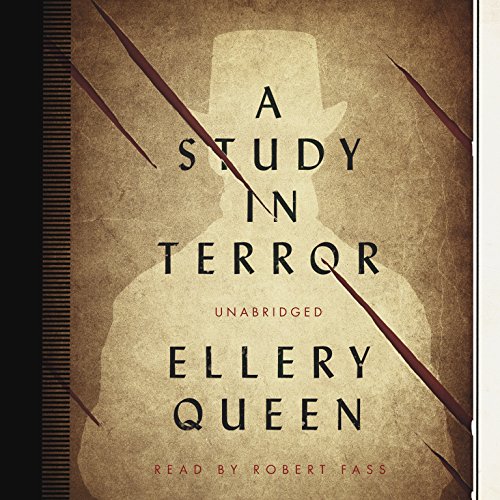 A Study in Terror

Ellery Queen and Sherlock Holmes match wits to reveal the identity of history's most infamous killer.

Ellery Queen and Sherlock Holmes are the undisputed masters of analytical deduction - their talents and methods strikingly, almost uncannily, alike. Through the strange interlocking of events past and present, the two celebrated detectives meet to focus their razor-sharp intellects - and their brilliant powers of observation - on the mystery of…Jack the Ripper.

History's most depraved murderer, Jack the Ripper found victims who were the whores of Whitechapel. Lurking in narrow, fog-shrouded alleys, he crept forth night after night to murder - and mutilate. Eluding Scotland Yard'smost heroic efforts to track him down, the Ripper continued to satisfy his unnatural appetites, unrestrained - and unidentified! Can Queen and Holmes unmask the notorious killer?

Uniquely imaginative, A Study in Terror is a masterpiece of mystery and suspense.

Interesting take on the story

Ellery Queen is working on his latest book and fighting a deadline when a friend brings him a manuscript, a lost memoir by Dr. Watson, chronicling Sherlock Holmes' involvement with Jack the Ripper. The true facts of the Ripper murders are played with a little, and the ending of the movie is totally changed, but this was an interesting take on the tale. Robert Fass does good with the Holmes/Watson parts, not so good with the Ellery bits.

Sherlock Holmes, Jack the Ripper and Ellery Queen all in one novel creates a mystery readers ideal. While many authors have tried to match Arthur Conan Doyle's tone and flow, no one has matched as well as Ellery Queen. A wonderful mystery filled with classic characters.