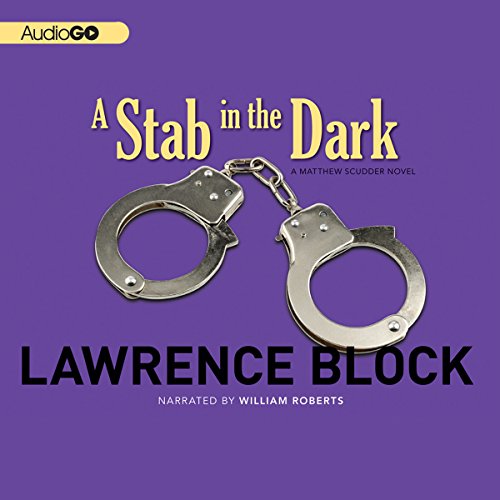 A Stab in the Dark

Nine long years have passed since the killer last struck - nine years since eight helpless young women were brutally slaughtered by an icepick-wielding maniac. The trail grew cold and the book was unofficially closed on a serial killer who stopped killing. But now "The Icepick Prowler" has confessed - but only to seven of the killings. Not only does he deny the eighth, he has an airtight alibi. Barbara Ettinger's family had almost come to accept that the young woman was the victim of a random killing. Now they must grapple with the shocking revelation that not only was her death disguised to look like the serial killer's work, but her murderer may have been someone she knew and trusted. Matthew Scudder has been hired to finally bring her slayer to justice, setting the relentless detective on the trail of a death almost a decade old, searching for a vicious murderer who's either long gone, long dead... or patiently waiting to kill again.

It is well written and keeps you guessing until the very end. Lawrence Block always delivers.

Scudder's alcoholism is becoming an issue

If you could sum up A Stab in the Dark in three words, what would they be?

Would you listen to another book narrated by William Roberts?

While not an awful narrator, I actually preferred the previous narrator in the series. This one had a taste for the cliche when picking his voices. Even Scudder's inner voice had a little New York cab driver in it.

This one made me feel the depressive pull of falling in the bottle. It did a very good job of capturing the state of denial alcoholics find themselves in. Scudder keeps finding new ways to explain his drunken actions.

If you want to know when the writing takes a notch up, this would be it. Scudder has become a fully complex character. You may even grow to dislike him at points during this one. That is not a bad thing. A truly heroic character needs flaws front, center, and hidden.

This is one of the early Matt Scudder's stories. You can tell that Lawrence Block is still working on Matt's character , but the story runs smooth with a terrific description of the New York "ambiance" . Definitively a good reading !

One thing that I think Lawrence Block does very well is that his plot seems to "unfold". His stories don't very often surprise with things that you are shocked with - rather they evolve with a logic that makes sense when you reflect back on them. Scudder never seems lost or in over his head - rather he is analytical and dogged. Also prefer the length of these to the 15 hour plus convoluted epics

THe plot moved along well... and yes, there were times when we "sat in the garage to hear more". There was definitely one time that totally surprised us while listening... ( no spoiler here)...

( spoiler) While I liked the whole plot, I thought the scened where Scudder is meeting with the woman who is also an alcohoic, and his dealings with his issue were very well done.

We listened on a car trip, and never got bored with it. Good plot, love the way William Roberts narrates.

I like the way, once the ending is revealed, one does not feel cheated. The clues were there for us to pick up as well.