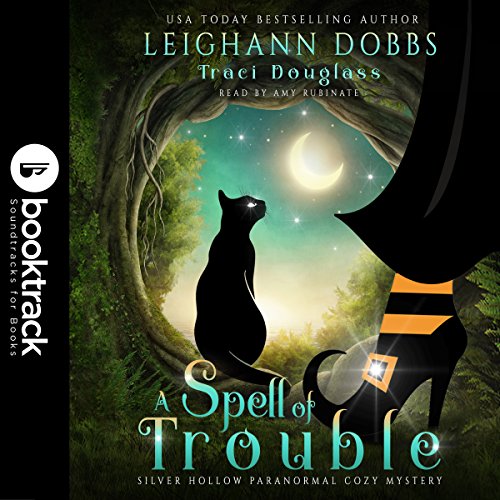 A Spell of Trouble (Booktrack Edition)

A Spell of Trouble: Booktrack Edition adds an immersive musical soundtrack to your audiobook listening experience!*

When town troublemaker, Louella Drummond, drops dead in front of Isolde Quinn's pet store just minutes after threatening both Issy and her cousin Graeme, the police in the small lakeside town of Silver Hollow assume it's from natural causes...until it's discovered that Louella was murdered. Not just any murder, though. Murder by paranormal means. Dark magic that could only have been performed by a powerful witch. And every law-abiding paranormal knows that dark magic is forbidden and carries strict punishment at the hands of "the committee" - the mysterious entity that provides law and order within the paranormal community.

Being witches, Issy and her three cousins fear they are at the top of the suspect list. To make matters worse, a secret division of the FBI has gotten wind of the happenings in Silver Hollow and sent two agents to ferret out paranormal activity. Even worse than that, Issy is annoyingly attracted to one of them!

Armed with their unconventional posse of familiars, Issy and her cousins dodge the efforts of the "real" police and the special FBI agents while following a twisty path of clues that lead to a shocking betrayal.

Cozy mystery with a touch of fantasy?

Seeing the cover gave me a thought of a children's book but it's a cozy mystery?

This got me too curious and made me bought it... Turns out, IT WAS WORTH EVERY PENNY!
I had fun not just with the writing and story itself (doing research it's a loved book by most readers) I also enjoy the soundtrack and how the music feels on this one, it drew me into the story more. Mischief, Quirky with the touch of fantasy... First time to hear something like this. A totally different experience!

listening to intense or dark mystery stories most of the time will actually make you want to listen to a lighter vibes like this. I will definitely hear for more.

First, narration. The narrator mispronounced several words, but not a huge number. Otherwise she does a good job, has a pleasant voice. The background music was also pleasant. The audio was sort of loud on the chapter heading, the rest was even.

The story was as I said, ok. Some interesting bits. Not without some flaws. I did like a few characters. Brimstone was the best animal. Was mostly indifferent to the others.

SPOILERS: I haven't figured out why only Brimstone, out of all the animals, can speak.

Didn't like the whole basis of the FBPI mistreating, killing what is implied as any paranormals found. Did I misunderstand that?

And talk about jumping to conclusions, about everything. Everyone believing the worst of others, too.

Still, I might try one more before deciding if I will listen to all of the series. I'm having a tough time deciding on the exact rating I'd like to give the book, so I will round up.

I couldn't get through this audio. There is theatrical music and other sounds in the background throughout this book. It's so distracting from the story. It's like a play without the visual aspect. I like to listen to books while doing other things so it was just annoying and I quit this one. The story might be ok but I couldn't get past the rest.

I love this book with the interesting, well defined chatacters and fantastic animals along with a touch of paranoral in Silver Hollow. This book is one in a series but great as a stand alone book. It is a light, funny. entertaining story that you will love. Thesetting is believable and the narrationis done by Traci Diveglass. i enjoyed this book.

I thought listening to a Paranormal Cozy Mystery was just the audio book to listen to starting on April Fools Day. I liked the magical music in the background of the story. Isolde (Izzy) Quinn, the owner of an enchanted pet store in Silver Hollow. Louella Drummond, the town trouble maker accuses Izzy and her cousin Graeme (police in town) and minutes later she drops dead in front of the pet store. Later they find out that Louella was murdered and the FBPI (Federal Bureau Paranormal Investigation is called in to investigate the murder because she was murdered by dark magic. Dark magic is forbidden and carries a strict punishment at the hands of "the committee".

Great Narration. Really enjoyed the extra music and effects. The book has Magic, Mystery and Murder. Could be a Hallmark movie.