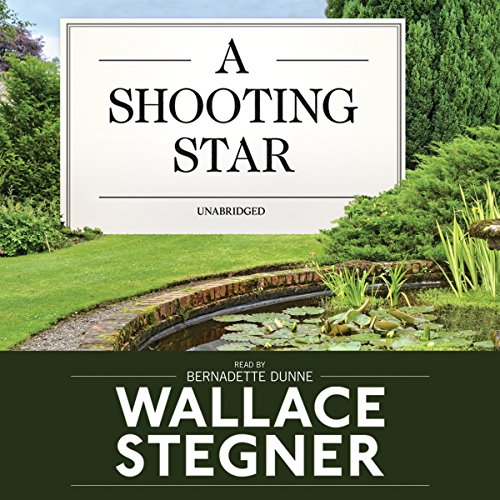 Sabrina Castro is a wealthy, attractive woman married to an older physician who no longer fulfills her dreams. An accidental misstep leads her down the path of moral disintegration. How she comes to terms with her life is the theme of this absorbing personal drama played out against the backdrop of an old Peninsula estate where her mother lives among her servants, her memories of Boston, and her treasured family archives. Now on audio for the first time, A Shooting Star displays the storytelling powers that Wallace Stegner’s fans have enjoyed for more than half a century.

Stegner has given us so much better than this!

I'm finding it hard to believe that the same author who gave us Angle of Repose and Crossing to Safety wrote this novel. A Shooting Star is predictable, tedious and reads like a romance novel. I found the characters stereotypical and annoying. There was none of the emotional investment I have come to expect from Stegner. My advice? If you are new to Stegner, do not start with this book.

This is the first book by Wallace Stegner that I was happy to be done with so I could move on to something better. Wallace had a tough sell to make the reader care about the problems of a spoiled rich woman, and I imagine a lot of readers like myself won't find enough character or substance to hang their hat on. I love Wallace Stegner's writing, but in this case, he chose the wrong subject matter. I highly recommend his other works.

Wallace Stegner is a masterful writer, but his poetic descriptions are lost in this narration. In Crossing to Safety narrated by Richard Poe, you hear the brilliance of Stegner's descriptions. Edward Herrmann also picks up on the lyricism of his writing. However, this narrator and Mark Bramhall read the poetry as though it were an irritation. The prose sounds more like a complaint than the thoughtful cogitation that it is. I wish there were alternate narrators for these modern classic authors (Pat Conroy is another author whose writing is beautiful but only heard in the reading of a couple of the Audible narrators, Frank Muller and Dan John Miller))