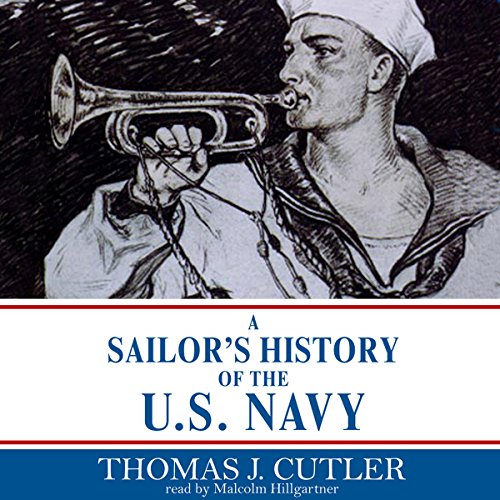 Adopted by the U.S. Navy for issue to all new sailors, A Sailor’s History of the U.S. Navy brings to life the events that have shaped and inspired the navy of today while highlighting the roles of all sailors—from seaman to admiral.

Rather than focus entirely upon such naval icons as Stephen Decatur and Chester Nimitz, as most histories do, author Thomas J. Cutler, a retired lieutenant commander and former petty officer second class, brings to the forefront the contributions of enlisted people. You’ll hear about Quartermaster Peter Williams, who steered the ironclad Monitor into history, and Hospital Corpsman Tayinikia Campbell, who saved lives in USS Cole after she was struck by terrorists in Yemen.

Unlike most histories, A Sailor’s History is arranged thematically rather than chronologically. Chapters are built around the navy’s core values of honor, courage, and commitment, its traditions of “Don’t Tread on Me” and “Don’t Give Up the Ship,” and other significant aspects of the navy.

As Cutler states in his preface, the book is not a whitewash. He includes mistakes and defeats along with the achievements and victories as he draws a portrait of a navy growing stronger and smarter while turning tragedy into triumph. The result is a unique account that captures the navy’s heritage as much as its history and provides inspiration as well as information while emphasizing that most essential element of naval history: the sailor.

A Sailor’s History of the U.S. Navy

What made the experience of listening to A Sailor’s History of the U.S. Navy the most enjoyable?

Learning the history of what it was to follow in the footsteps of previous sailors...

At first I perceived it as a feel good book about the service, but after listening for a while, i came to appreciate the trials and learning curve that we (as a country) had to go through to get to the point we are at now. This book seems to get there in a round about manner, with colorful tails of accomplishment, and loss. After listening to it long enough, I was moved by the school of hard knocks that we had to go through.

If you are currently serving, thinking about serving or did serve in the U.S Navy, this book is a must for Navy history. This book has gave me some well needed motivation. Bravo Zulu to the folks who made this book possible.

Awesome overview of the US Navy.

Loved it, dragged on for a bit at the end though. Loved all the famous qoutes too.

Great book for US Naval heritage.

The book was well written, thoigh there were some parts that repeated and overlapped leading to a little confusion. Good narration, and a great book for US Naval heritage.

Even having been out now over 20 years there is no greater pride than learning in who's company you were kept.

I enjoyed listening to the story about the U. S Navy and I believe that you will enjoy it too

Good way to learn about Navy History while battling grease on my dishes. Best parts compare similar patterns of courage in Revolutionary and World Wars, and give the personal accounts from individual perspectives.

Decent, I guess, for primer on US Navy culture and ethos. Chop last two or three chapters and you've got a better product that stays on-message about Navy Core Values.