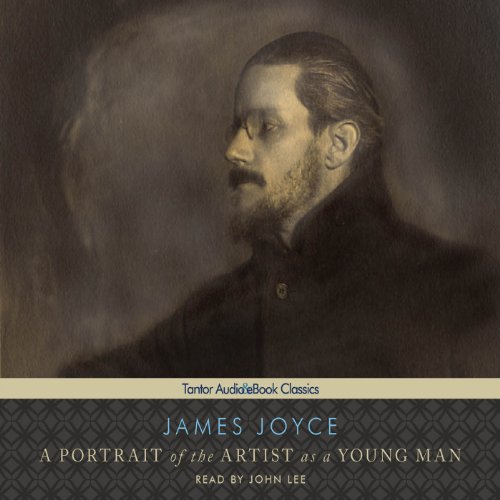 A Portrait of the Artist as a Young Man

Perhaps James Joyce's most personal work, A Portrait of the Artist as a Young Man depicts the intellectual awakening of one of literature's most memorable young heroes, Stephen Dedalus.

Through a series of brilliant epiphanies that parallel the development of his own aesthetic consciousness, Joyce evokes Stephen's youth, from his impressionable years as the youngest student at the Clongowed Wood school to the deep religious conflict he experiences at a day school in Dublin, and finally to his college studies, where he challenges the conventions of his upbringing and his understanding of faith and intellectual freedom.

Joyce's highly autobiographical novel was first published in the United States in 1916 to immediate acclaim. Ezra Pound accurately predicted that Joyce's book would "remain a permanent part of English literature", while H. G. Wells dubbed it "by far the most important living and convincing picture that exists of an Irish Catholic upbringing".

With a rough-hewn Irish accent, John Lee narrates this classic novel by Ireland's favorite son. Joyce's first novel, this bildungsroman is nothing like his more daunting Ulysses, but it still shows the wide range of style and tone he used in his writing. Narrating any Joyce text is a demanding task, but Lee pulls it off expertly, not trying to make unique voices for characters, but melding them into a coherent overall narration. Americans not accustomed to an Irish accent may need some time to get used to this narration, but it's worth the effort as Lee's delivery certainly provides the local color of this timeless novel.

Good, but a little rushed

This is a good (not great) reading of a great book. I normally enjoy John Lee a great deal, but I see two problems here. First, the narrator's Irish accent is a little heavy-handed: more obviously "Irish" than that of other narrators of the book. (John Lee may be as Irish as Donal Donnelly for all I know; but I'm pretty sure "Howth" does NOT rhyme with "mouth." My conclusion, which I admit may be wrong, is that he's trying just a little too hard.) Second, much of it seems rushed. There's a crucial scene at the end of Chapter 3 when Stephen Dedalus visits a priest and makes confession. The priest is sorrowful, bemused, maybe a little jaded as he listens to Stephen's account of his well-developed erotic life; but Lee romps through the confessional dialogue with the same speed and energy he uses for the boyhood conversations on the football field.

Clearly there's soemthing subjective about this. I see from the other listings that the recording is about the same length as Jim Norton's; I would have said it was at least an hour shorter if not more. So I may not be articulating the real problem. I enjoyed it; it's certainly never dull; but I can't quite give it five stars.

Joyce is otherworldly. It is hard to even judge his early stuff against itself. He seems to have been born a master of language and art. Most authors would be happy to end their careers with 'Dubliners' and 'Portrait of the Artist as a Young Man.' For Joyce, these are just the beginning of his journey. This novel, more than any other, is a modernist monster maul, a literary 'godevil' that splits all readers. IT is impossible to interact with Joyce and not love him or hate him. Anyway, I loved Portrait of an Artist. I loved it all.

Once I became acclimated to the Irish accent, I found this presentation a delightful surprise. Joyce was far more accessible here than he would become with ULYSSES (or, ultimately FINNEGAN'S WAKE), but even still, he presented the reader with challenges.

To my amazement, Lee handled everything masterfully. Even the famous sections in which the author debates various aspects of Catholicism were delivered smoothly and cohesively.

Joyce is not for everyone, of course. For those considering the two greater works mentioned above, PORTRAIT is an excellent place to start. If one can follow the discourse on religion here, the catechism of ULYSSES should prove relatively easy, and perhaps the reader may proceed thence to "Howth Castle and Environs."

Bottom line: Though I do not revere this work as much as the other two, I must applaud the delivery and production.

Dante has nothing over on Joyce on painting a tormented existence in hell. A bit dry at times but still an interesting read.

I enjoy a good classic mixed in with my usual modern fiction now and then. John Lee, the narrator, doesn't disappoint in delivering this incredible work with style, perfect timing and voice characteristics.

While a classic is just that for a reason, it doesn't always make it palatable for today's consumer. This narrator delivers a stunning version that is more than palatable; it's a feast!

Joyce At His Most Accessible—Poetic Masterpiece

Joyce had perfect command of the English language. Portrait is for the most part an autobiographical account of Joyce’s life—a coming of age tale. It is filled with descriptions of his early life including the influence of the Catholic Church in his upbringing. To understand the entire text, it’s advantageous to do research on Joyce’s life. I realize that’s not something anyone likes to do anymore—but older literature is often written at a level at which research needs to be done to enhance the meaning of the themes, characters, etc. This is a perfect novel. When I first read this book in 9th grade, I had mixed feelings. Now, listening to it has convinced me of just how great this book is.

Narration and production is good. Listen to the sample before buying. There are various versions available, so if you don’t like this narrator you can try another.

Portrait of a Master

Joyce's lyrical prose is sometomes obscure and confusing, but it is always challenging, always stimulating and always poetic and above all, original.

A wonderful coming of age story set in Ireland. Full of question and thought. Challenging who one is and who one is meant to become.
Well narrated however spoken in a broken Irish way that is at times hard to understand.
Worth while leaves feeling thoughtful!

Joyce gives us a picture of Catholic Ireland in the early 20th century.Joyce describes an Irish Catholic family; i.e. riven with Catholic guilt and ambivalent about God and Ireland’s place in the Gaelic world. Joyce’s main character, Stephen Dedalus, is born into an upper middle class Irish family that falls on hard times. Dedalus graduates from a Jesuit school and moves on to college but his life steers away from God and Ireland in his journey to manhood.

The fragility of the Catholic Church and organized religion is evident in James Joyce’s “…Portrait…” The character of Stephen Dedalus is portrayed as a top of his class student that is coveted by the Church hierarchy to become a Jesuit priest. The strength and allure of the Church is clearly evident in Joyce’s description of the Catholic Priesthood’s power to attract the best and the brightest of its brethren. However, Dedalus, after a day contemplating the Church’s offer, chooses to pursue a secular life.

At best, one sees Stephen Dedalus as a burgeoning Humanist; at worst, a hedonist life traveler. A great tale; well told by John Lee.