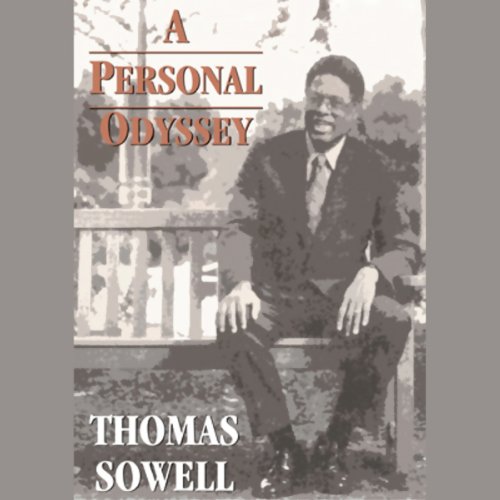 Here is the gritty, powerful story of Thomas Sowell's life-long education in the school of hard knocks, a journey that took him from Harlem to the Marines, the Ivy League, and a career as a controversial writer, teacher, and economist in government and private industry. It is also the story of the dramatically changing times in which this personal odyssey took place.

The vignettes of the people and places that made impressions on Sowell at various stages of his life range from the poor and powerless to the mighty and the wealthy, from a home for homeless boys to the White House. More than an account of Sowell's life, this is also the story of the people who gave him their help, their support, and their loyalty, as well as those who demonized him and knifed him in the back. It is a study not just of one life, but also of life itself, with all its exhilaration, pain, constant striving, and deserved success.

"Offered a job simply because he was a black man, he turned it down and said why. Despite this righteousness, he has retained a sense of humor....Sowell admits to having had plenty of enemies, but enough friends to save him. This memoir should multiply the latter. Jeff Riggenbach...renders the narrative vividly." (AudioFile)

Helps you understand the man

This autobiography of the economist Thomas Sowell helps you understand how many of his ideas, especially about education, were formed. As a man who was able to reach the heights of academic prominence, he illustrates how high academic expectations for children from any socio-economic background create fertile ground for their future successes. Even though the author had his own academic bumps along the way, due to family problems in high school, the spark was there from his earlier educational experiences to propel his pursuit of excellence forward.

It was also interesting to see how Sowell's own independent streak influenced his odyssey. He is definitely a man who knows his own mind and will not be pushed around by anyone. This is evidenced fairly early in his life and is a theme that continues throughout this book.

I wish he had discussed more the intellectual odyssey that influence the change in his economic philosophy from Marxism to the one he holds today. But, perhaps that is for another book.

I thought that the reader was excellent and made the autobiography come to life.

June 30, 2020 is Thomas Sowell's 90th birthday. It is a great time to once again read his autobiography which was released in the year 2000 when he was a mere 70 years old. Sowell in addition to being the foremost economist in the US has written dozens of books and hundreds of newspaper columns. His latest book, Charter Schools and Their Enemies, is being released today. Sowell was born into poverty in Gastonia NC. He was given up to other family members because his parents could no afford another mouth to feed. He went from these beginnings to earn a PhD in Economics from the University of Chicago and to teach at several universities.

MY PERSONAL ODYSSEY is an intensely personal perspective on his life. One cannot go wrong listening to or reading any Thomas Sowell book. Almost all are available at Audible.

This book along with all other books by Thomas Sowell have my highest possible recommendation.

After reading the print version of Applied Economics, I was curious to know more about Thomas Sowell. This book did a great job of satisfying my curiosity. Though, maybe unintentional, the humor of Thomas Sowell had me laughing out loud many times throughout, which made this an especially easy listen. Humorous bits aside, this is an amazing story that shows what a GED (general equivalency diploma) and years of hard work might get you.

A very good autobiography by Dr. Sowell. Straightforward and unapologetic. He tells how he made it through hard work and by taking advantage of the opportunities available to him. As a young man, he was a Marxist and he knew what that meant unlike many today. As he matured and educated himself fully, his views changed. Even though Dr. Sowell is 90 years old, I think his works are more important than ever. His autobiography shows plainly that he did NOT come from a privileged upbringing.
Candice Owens recommended his books and since she is a brilliant and educated young woman, I have begun to study his writings.

This book was one of my favorites from audible.com. Mr. Sowell's intellect comes through with a large amount of humorous irony. The description of his education and academic experience is so "right on" yet very discouraging. I would have loved to have had him for a professor.

A must read for for all Americans but especially people of color! Read any and all things Thomas Sowell and an education one will get; history, human nature, political insights but especially how liberal civil and political rights zealots are and have ruined Black Americans under the guize of equality for all! His life story tells it all in the raw!

I have a greater appreciation for TS

I watched and listened to him for a very long time and was curious about him, more so when I found out he was a Marxist in his college days.

I was intrigued as I learned about him and his youth. He things he did and how he thought was uncomfortable in the beginning. But as the story went on it was clear to me that he had to have stepped exactly as he did, to become the excellent mind that he is today.

No it didn’t happen overnight. He is the person that he is because he extracted everything in front of him. He reasoned early how he was going to live and approach life and nothing moved him, I mean nothing.

If you look up principled in the dictionary his picture would be there. That’s a terribly hard life standing up for what you believe and know to be right.

I’m afraid I couldn’t walk in his shoes for even a few feet! It’s a marvel to know about a person like Mr. Sowell and find out his history and details of not only his life and actions, but his thought process and reasoning for everything he did.

I can see people like me in awe of him as well as people who despise or dislike him. It’s just that his truth is so convicting that you consciously choose to establish your own principals and set it to the hugest possible sustainable standards or pretend you don’t know any better.

Positively affected me, I’d love to see him in person.

The narrator presented good, but like the weakness in the perfmance of the Fredrick Douglas biography, a black dude should have narrated.

One of the best books I’ve read this year....

Prior to listening to this book which was recommended by a friend, I did not know who Thomas Sowell was or what he did for a living. However, after listening to his life story, I became a fan. I am looking forward to reading his other works, especially the one on Charter Schools.

recommended reading with historical perspective on issues of today. For some, I might even call it required reading as he obliterates victimhood.

wonderful to get a glimpse into the life of this great man. I also found the narrator very good.

If there was ever anyone to give coming generations a spark, I cannot think of anyone better than Thomas Sowell doing so.

After reading many of his books it was quite enjoyable to learn about his life.

Enables you to see what and from where that string his remarkable character springs from.

I'm making my way through all of Dr Sowell's work and I've been blown away. I'll always appreciate how he opened my eyes.

Great book, full of insightful stories that help explain a period of history as well as the personal experiences that shaped Sowell vs thinking. Also great narrator.

Too many unnecessary gaps in the speech. Probably owing to its being turned from cassettes to this format.
Still a good biography.

America’s greatest critical thinker and race relations expert, a true polymath. From incredibly tough and poor upbringing to the end, his independence and free thinking principles shine through .