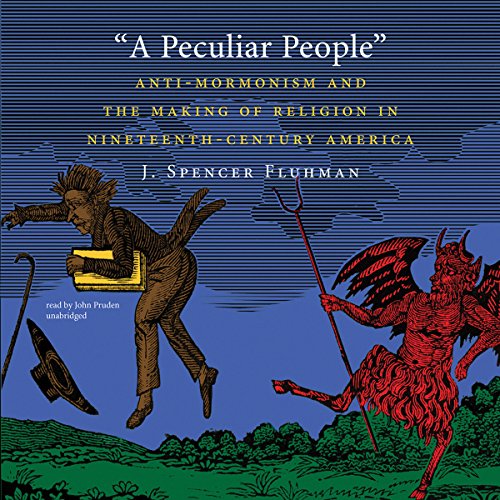 Though the Constitution guarantees the free exercise of religion, it does not specify what qualifies as a religion. From its founding in the 1830s, Mormonism, a homegrown American faith, has drawn thousands of converts but far more critics. In A Peculiar People, J. Spencer Fluhman offers a comprehensive history of anti-Mormon thought and the associated passionate debates about religious authenticity in 19th-century America. He argues that understanding anti-Mormonism provides critical insight into the American psyche because Mormonism became a potent symbol around which ideas about religion and the state took shape.

Fluhman documents how Mormonism was defamed, with attacks often aimed at polygamy, and shows how the new faith supplied a social enemy for a public agitated by the popular press and wracked with social and economic instability. Taking the story to the turn of the century, Fluhman demonstrates how Mormonism’s own transformations, the result of both choice and outside force, sapped the strength of the worst anti-Mormon vitriol, triggering the acceptance of Utah into the Union in 1896 and also paving the way for the dramatic, yet still grudging, acceptance of Mormonism as an American religion.

“A pleasure to read. Fluhman’s deeply researched work explores the tangled relationship between anti-Mormon and Mormon histories with a degree of thoroughness and comprehensiveness never before achieved.” (Amanda Porterfield, Florida State University)
“Spencer Fluhman has read widely and eclectically, probing the portraits of Mormons that emerged primarily from the pens of critics and sometimes from ham-fisted defenders. This book brilliantly situates these polemics in religious history, exploring a rich vein of argument about the nature of religion in nineteenth-century America.” (Sarah Barringer Gordon, University of Pennsylvania Law School)

The author does an excellent job of integrating Mormonism and anti-Mormonism into the conceptual framework of American religion. This is an excellent academic work that won "best first book" from the Mormon history association. If you are looking for an anti-Mormon or pro-Mormon book, best to look elsewhere.

Very well performed and a great listen. Brilliant scholarship and engaging research. I highly recommend it!

Thos book would be infinitely better if it were 5 1/2 hours shorter.

I'm still interested in the subject matter and I hope to soon read an interesting book that I can learn from. I bought this book hoping to learn about the history and development of the Mormon faith but instead ... the author attempts to regale the reader with more than 6 1/2 hours of the dryest, repetitve, and verbose history of how the Mormons were persecuted by narrow minded, parochial zealots. He manages to do this in a manner that would make listening to William F. Buckley read a 500 page textbook on differential equations seem breathtakingly exciting. While the narrator did a good job reading the material, not even Scott Brick could make this worth listening to. Save your credit and 6 1/2 hours of your life. Here's the Cliff Notes version... The Mormons were persecuted by virtually everyone from New York to Salt Lake City and it wasn't until they renounced polygamy in 1890 as part of the official doctrine did they start to be accepted by American society and religious communities.